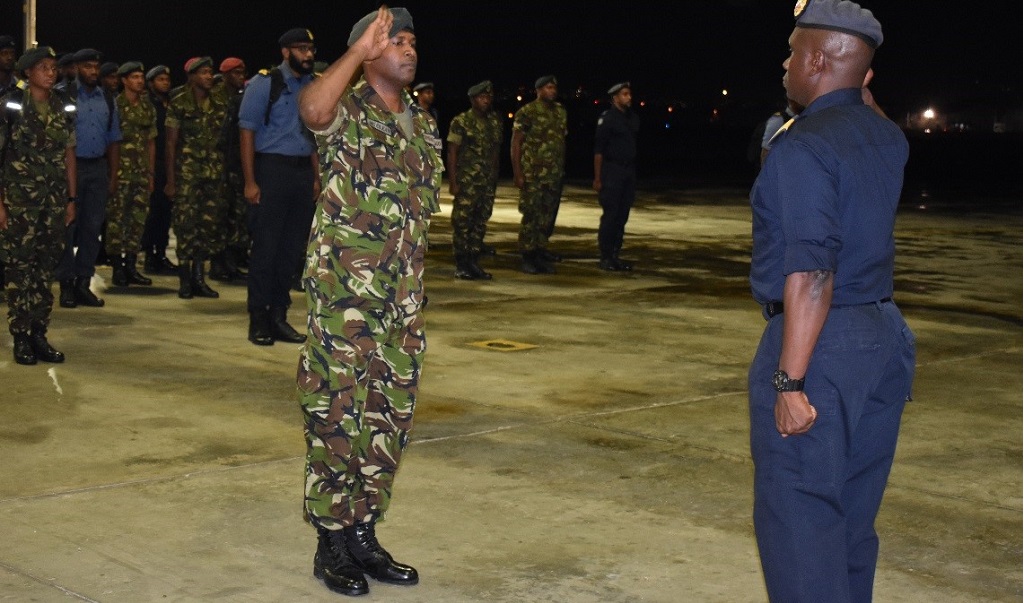 The Defence Force (TTDF) personnel who were deployed on September 8 to provide Humanitarian Aid and Disaster Relief to the Bahamas in the aftermath of Hurricane Dorian, have returned to Trinidad and Tobago.

The 100 TTDF troops arrived at the Piarco International Airport on Monday night aboard a Caribbean Airlines Limited flight at 7.30 pm and were welcomed home by Chief of Defence Staff Air Commodore Darryl Daniel.

Addressing the returning contingent, Air Commodore Daniel applauded them on being excellent ambassadors of Trinidad and Tobago during their deployment. He congratulated the team on their quick mobilization during their 30 days on the ground in the Bahamas and the dedicated assistance they provided in coordinating relief operations alongside the Royal Bahamas Defence Force (RBDF) and the Bahamas National Emergency Management Agency (NEMA).

The Chief of Defence Staff said he was thankful for the troop’s safe return and reunion with their families. He also welcomed the reintegration of the troops into their respective TTDF formations.

The TTDF Task Force Commander to the Bahamas, Major Derron McClean, expressed gratitude to the citizens of Trinidad and Tobago for their overwhelming support during the team’s deployment to render assistance to the people of the Bahamas. Major McClean described the troops’ experience in the Bahamas as humbling, as the level of devastation witnessed on the islands of Abaco and Grand Bahama was extensive.

While in the Bahamas, the TTDF troops performed specific duties in the Grand Bahama area including:

- Security assistance along with the RBDF at critical locations;

National Security Minister Stuart Young commends the officers for the strategic support provided to the people of the Bahamas as well as for their efforts to aid that country’s return to normalcy.

The Ministry of National Security further expressed its appreciation to the troops for representing Trinidad and Tobago with pride and professionalism during their deployment in the Bahamas.