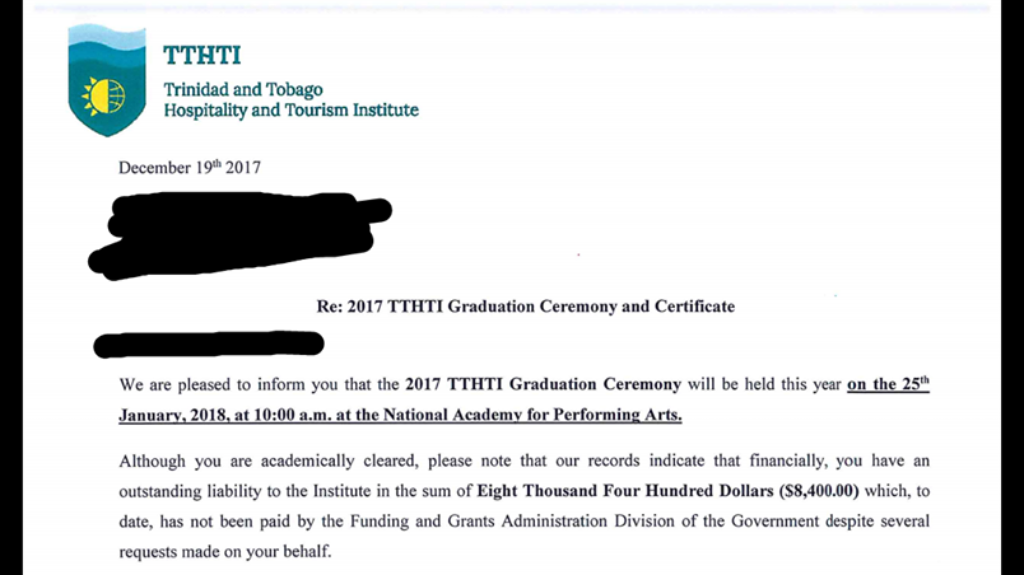 Scores of students of the Trinidad and Tobago Hospitality and Tourism Institute (TTHTI) are today expressing concern that they may not be able to graduate come January.

On Tuesday, students met with the institution, at which point they received letters informing them that their certificates would be withheld until they are financially cleared.

They were told that their fees were not paid by the Funding and Grants Administration Division of the Government despite requests made by the institution on the students' behalf. 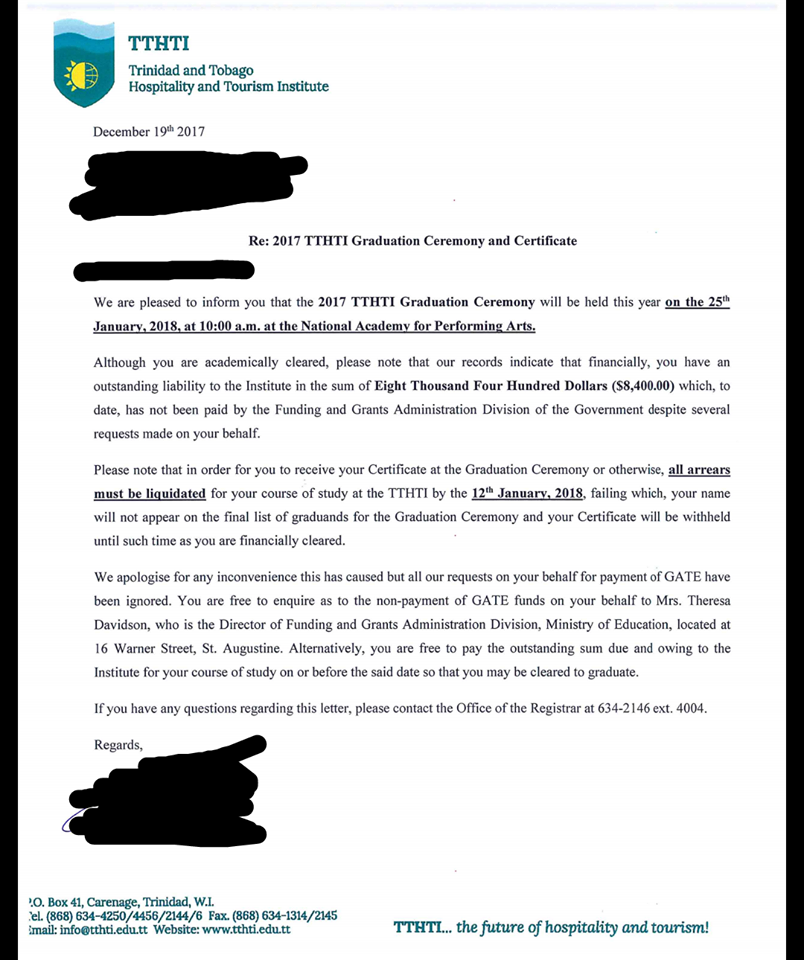 According to the letter, students have up until January 12, 2018, to pay their fees. “Please note that in order for you to receive your Certificate at the Graduation Ceremony or otherwise, all arrears must be liquidated for your course of study by the 12th January, 2018, failing which, your name will not appear on the final list of graduands for the Graduation Ceremony and your Certificate will be withheld until such time as you are financially cleared.”

One student, who spoke with LoopTT on the basis of anonymity, said they were not given any prior notice and they feel as though they are being bullied.

“It feels as though we are being punished and bullied for something we have no control over. My main concern is not getting my certificate. A lot of students including myself are in the process of job applications as well as we are checking out international universities to further our education.”

The student noted that they have done all that is required of them.

The disgruntled student is therefore calling on the relevant authorities to intervene immediately to ensure that they graduate, come January.

“They are telling us we cannot graduate and receive our certificates until we pay the money. My issue here is that this is between the school and the government. We did everything required of us. We filled out our forms, we did our online application and we maintained our GPAs. We should be allowed to graduate and receive our certificates,” the student noted.

The student said they are weighing their legal options.

LoopTT reached out to the CEO of the Trinidad and Tobago Hospitality and Tourism Institute Brian Frontin, who confirmed the meeting with students.

Frontin issued a response around midday on Thursday.

When contacted for comment, Minister of Education Anthony Garcia told LoopTT that he is aware of the situation but that it was a matter between the TTHTI and the students. He stated that the Board of the TTHTI does not operate under the guidance of the Ministry of Education and that it is the Board's responsibility to ensure the fees are paid. He did not provide clarity on the statement by the TTHTI that they have been unable to recover the requisite funds from the Funding and Grants Administration Division of the Government.