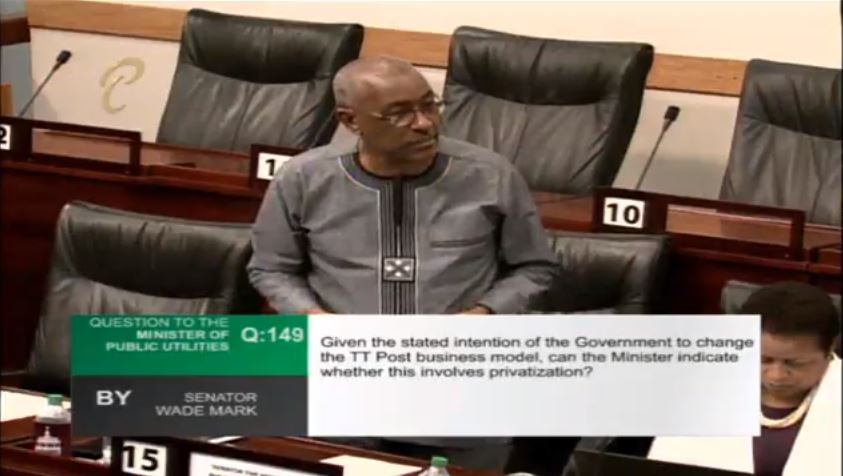 The Trinidad and Tobago Postal Corporation (TTPost) has recorded an over $11 million dollar loss in revenue over a seven-year period.

The figures were revealed by Public Utilities Minister Robert Le Hunte who was speaking in the Upper House on Thursday.

Opposition Senator Wade Mark asked whether the Government was considering privatisation of the corporation after reports of significant losses over the years.

In response, Le Hunte said that this was not an immediate option.

" The current business model used by the Trinidad and Tobago Postal Corporation (TTPOST) is under threat as the postal sector worldwide has been greatly affected by a rapidly changing business environment driven by significant advances and innovations in information and communication technologies. In the wake of these developments, the demand for postal services worldwide has been transformed resulting in postal operations losing significant market share in parcels, express and letter mail items. These developments have negatively impacted on the operations of TTPOST with the corporation’s mail volume falling by 33% from 72 million pieces to 48 million pieces and its revenue declining by 11.7% from $82 million to $70.8 million over the period 2010 to 2017. The board of TTPOST, recognising the serious threat posed to the financial viability of the corporation by the changing environment, has decided to procure the services of a consultant to help in the development of a new business paradigm."

"The primary objective of this initiative is to explore opportunities created by new business technological advances and to develop new complimentary lines of business in order to generate new revenue streams. A second objective of the consultancy is to review the existing businesses and identify the scope for promoting greater operational efficiency. There have been no discussions on the privatisation of the existing business related to its universal service obligations."

A total of 11 local and six foreign firms have expressed interest in being part of the creation and capitalisation of a new business paradigm and the Ministry is preparing to send out requests for proposals from the interested parties.

Le Hunte said he expects that the awarding of contracts should be finished by September based on the expressions of interest and the report is expected to be completed by the end of the year.

The Public Utilities Minister further noted that a policy position on the postal service is presently being developed of which the Postal Workers’ Union is aware.