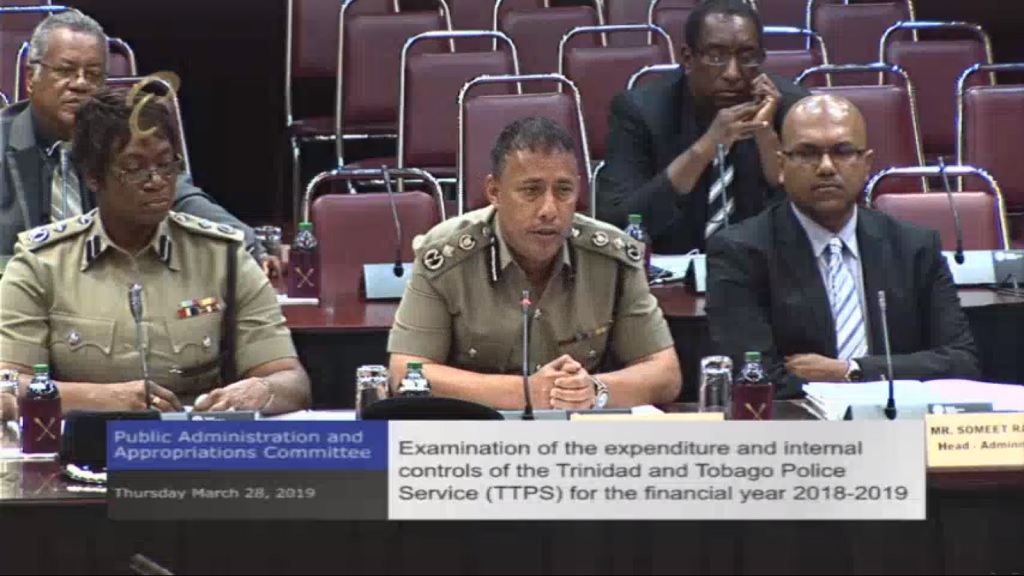 The police service is cracking down on errant police drivers who were found to be speeding or acting negligently.

Speaking at a meeting of the Public Administration and Appropriations Committee on the Trinidad and Tobago Police Service (TTPS), Griffith said up-to-date tracking systems in police vehicles will now be able to determine whether police officers acted negligently when involved in road accidents.

He referred to recent incidents in which pedestrians were killed in road accidents involving police officers; one which involved a woman who was hit by an SRP officer in Diego Martin and another pedestrian who was killed while crossing the Priority Bus Route near Barataria.

Griffith said police vehicles going above the speed limit while not on a distress call, who are involved in accidents, could be found culpable for the repair of the vehicles.

He said these new systems will assist in cutting down on the number of police accidents and to determine whether they were negligent in the performance of their duties.

Griffith said over the past three years, 500 vehicles have been put out of commission, mostly due to improper driving practices.

“We had 500 police vehicles that we have lost over the last three years based on some degree (of) poor preventative maintenance but more so improper driving practices,” he said.

“Now, for example, persons are accountable. Of the 500 vehicles we lost, not one officer was culpable but we are now putting systems in place to ensure police officers are aware that you can be culpable, you cannot just use an excuse that you were on a distress call.

“We have GPS tracking on the police vehicle, we can now measure the speed the officer was going at prior to impact,” he said.

Someet Ramroop, TTPS Head of Administration, said over 1,023 vehicles are due to be repaired.

Approximately $39 million was requested for repair and maintenance of these vehicles.

Griffith said the main goal is to reduce expenses while not affecting productivity.

He said measures will be put in place to cut down on the abuse of the use of the police siren except for emergencies.

Regarding unmarked vehicles with police sirens, Griffith said in order to use unmarked police vehicles it must be required from the Transport Commissioner.

"Only specific vehicles must use it and only when required, it cannot be abused," he said.

Griffith said apart from salaries and some $53 million, TTPS has not received any of their allocations for the fiscal year 2018-2019.

However, it was revealed at the committee meeting that the of this, TTPS has so far received just short of $53 million, not including wages and salaries, which was applied to debts accrued in 2017-18.

Griffith said this is not a request for more resources, just what was approved in the Budget for recurring expenditures.

“We have recurring expenditure. As at this time we have not received anything for fiscal year 2018/2019, apart from the salaries.”

He said if the police service does not pay landlords where their stations are housed, they can even be put out of these buildings.

Griffith said however that the TTPS has received $20 million dollars which ‘assisted us greatly’ for the establishment of projects.

Griffith said he is in negotiations with the Ministry of Finance to secure another $47 million of the 2019 tranche, which will be used to pay the outstanding bills for 2017-18.

Measures being taken to deal with suspended officers

Griffith said measures are being taken to attend to the issue of over 300 police officers who have been indefinitely suspended.

Griffith said some may even have secured a new job and are getting double salaries.

“I am looking at each and every…officer. Some of these officers have migrated, several of them are working elsewhere and getting a double salary. My recommendation is those who have been suspended, we need to verify whether or not we have enough information to warrant a tribunal.

“It is inappropriate that you have a system of over 300 police officers in just 7,000 that are on suspension indefinitely.”

“Through the restructuring of the legal department, we’re looking, with the monitoring unit, each and every one we intend to deal with and fast-track to ensure that police officers would either be brought back to duty, the suspension would end, or they are suspended with a specific timeline, or they would be fired…this will ensure police officers are aware that there are consequences.”

“You cannot try to beat the system or find loopholes in the criminal justice system. We must never see the TTPS as being an avenue where you can benefit by being indisciplined,” he said.

Griffith said the TTPS is also implementing other measures such as online reporting and drone technology, which he said will also assist in border control.