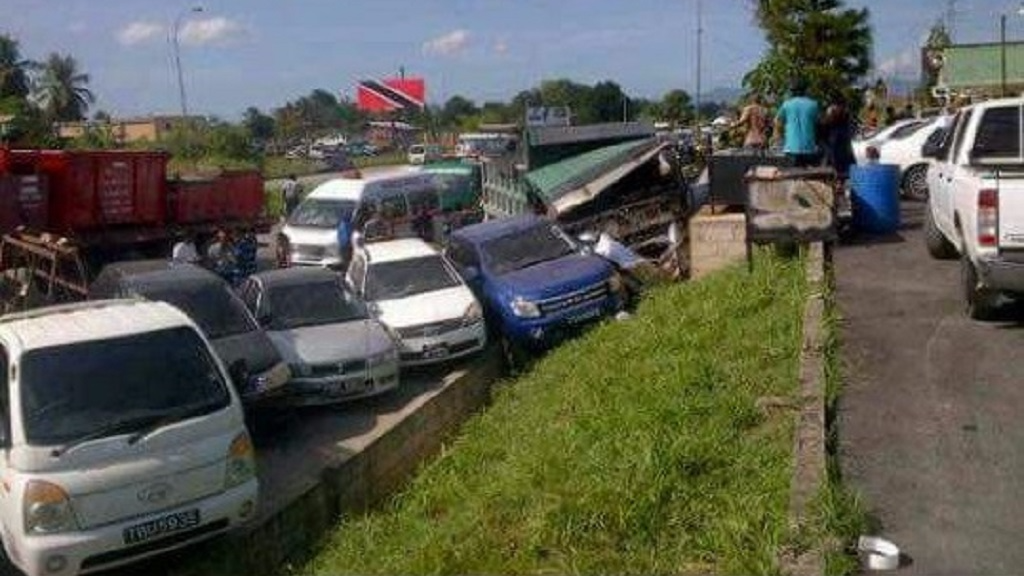 The TTPS shared this photo taken in 2012 near the roti shop in question which involved 12 vehicles.

The Trinidad and Tobago Police Service (TTPS) said that police will continue to monitor traffic near the Highway Roti Shop, Freeport, which has been classified as a 'Freeport Accident Hotspot'.

In a release, the TTPS said since 2010, 11 fatal road accidents were recorded near that particular shop, resulting in 14 deaths; 12 males and two females, leading the location to be identified as the 'Freeport Accident Hotspot' by the Traffic and Highway Patrol Branch, of the Trinidad and Tobago Police Service (TTPS).

The TTPS said 2014 was a particularly devastating year for road safety, with five lives being lost to road accidents, in that area.

The TTPS said that given the gravity of the situation and increasing complaints to the police to institute measures aimed at mitigating against the loss of life posed by motorists who park indiscriminately along the highway, as well as by passing vehicles, the strategic static patrols were introduced.

A reference was also made to complaints from Freeport/Chickland Councillor Anil Balliram at a police town meeting in Carapichaima, on September 6.

The police service said the 32 percent reduction in road fatalities for January-December 1, 2017, compared to the same period in 2016 is 'directly attributable to the strategic static patrols instituted in the division, particularly along the Sir Solomon Hochoy Highway, Freeport'.

For the respective period, 17 road fatalities were recorded in the Central Division compared to 25 in the previous year.

"In Central Division alone from 2010 to year to date 2017, there were 336 deaths resulting from 279 fatal road traffic accidents. From those deaths, 219 resulted from fatal accidents on the highway."

"With the introduction of the strategic static patrols in the area, there has been a general decrease in fatalities with zero road deaths recorded for 2017 thus far," the TTPS said.

It added that in addition to the discernible positive effect of the static patrols in saving lives, the strategic nature of the location also enables a tactical response to reports of criminal activities in the area east and west of the Freeport Overpass.

"The strategic static patrol instituted along the Sir Solomon Hochoy Highway, Freeport, as well as along roadways in other parts of the country; forming part of the TTPS holistic policing strategy, will remain in effect," the release ended.

The statement came in response to comments made in Parliament by senator Gerald Ramdeen, who said police officers parked near the restaurant to chase customers away because the shop allegedly did not supply free roti for a senior officer's son's wedding.