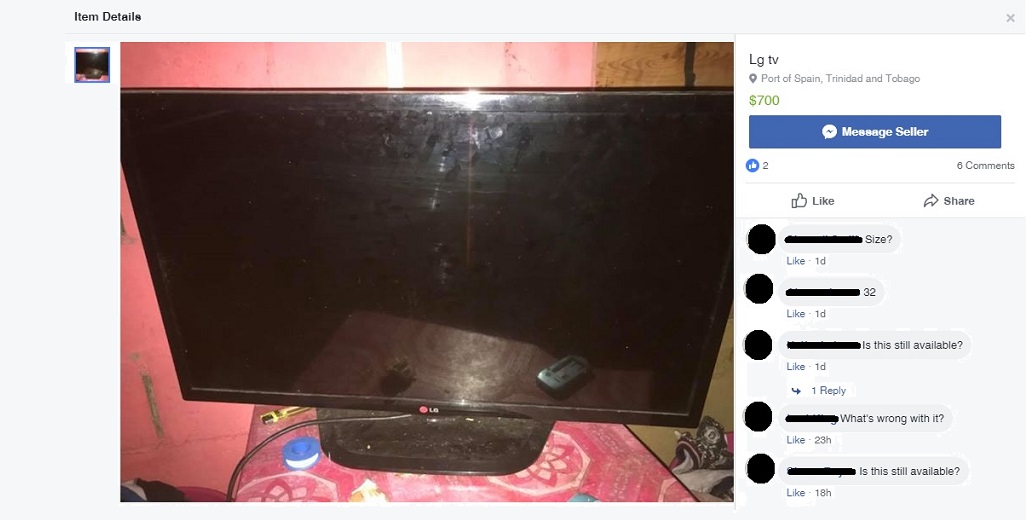 The Police Service is warning members of the public to be wary of online scams where unsuspecting people are robbed by criminals who create fake social media profiles to trick them into responding to online advertisements.

This warning follows an increase in reports of local online scams that result in victims being fleeced out of large sums of money by criminals.

According to a statement by the TTPS, these social media advertising scams usually involve the offer of vehicles for sale, cellular devices and electronics including television sets, sound systems and other items, at extremely low prices.

The buyers, who respond to these advertisements, are then robbed at gunpoint and assaulted.

As such, members of the public are urged to pay close attention to details regarding these transactions, particularly how realistic the offer appears to be.

“As a general rule, if an offer made online or otherwise appears too good to be true; then it is highly possible, it is a scam. Consumers are therefore urged to pay particular attention to the profiles of individuals posting online advertisements, in various Facebook groups, before responding or agreeing to meet with a purported seller.”

The statement recounted that three people fell victim to a Facebook advertisement which offered a vehicle for sale; they were robbed of $15,000 in cash and cellular phones.

The incident occurred around 5:30 pm on Monday 6 August.

The victims, all residents of Freeport, went to the NP service station in Barataria where they met with a man who promised to take them to Upper 6th Avenue, Malick, Barataria, to view a vehicle which had been advertised for sale for $17,000 on Facebook.

On reaching 3rd Street, two men approached and robbed the victims of the $15,000 in cash and three cellular phones before escaping on foot.

Meanwhile, in another incident which occurred around 6:30 pm on Wednesday 8 August, a 43-year-old Chaguanas man and his wife proceeded to 6th Avenue, Barataria, where they had arranged to meet a man to purchase a Nissan Navara vehicle.

On arrival, the victims were approached by two men, one armed with a gun, who demanded that the woman hand over a bag containing $80,000 in cash which was for the purchase of the van.

She complied and the suspects ran off.

When she got to the location she was accosted by two men, one armed with a gun, who robbed her of $4,000 which was the cost of the television and a cellular phone.

In light of these reports, the TTPS is warning persons to avoid conducting financial transactions in private areas.

“Where an item has been offered for sale online, at no time should the potential buyer meet the purported seller at an isolated or lonely location; allow the person to enter your vehicle or follow that person to another location. Any transaction involving cash payment of large sums of money to unknown persons should be avoided.”

Those who have fallen victim to social media scams carried out locally are advised to make a report to the nearest police station or call 999.

No bail for tree cutter after shooting in Tobago