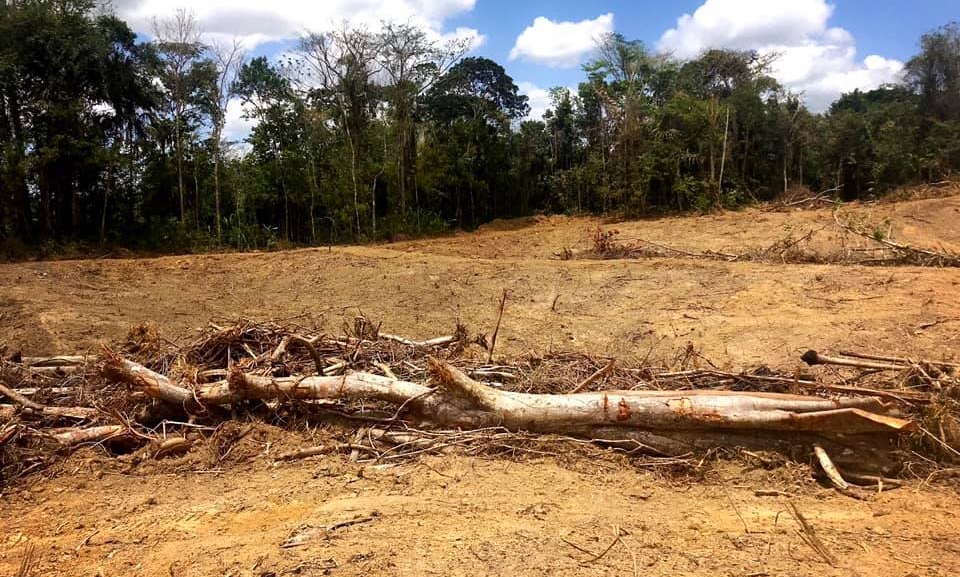 Photo: Approximately 300 acres of forest reserves in Tableland were cleared by illegal farming practices, according to photos shared by Minister of Agriculture, Lands and Fisheries, Clarence Rambharat. In 2019 fines for illegal clearing of state lands were increased to $50,000 and 10 years jail time.

Amid a spate of proposed development projects in Trinidad and Tobago, conservationists are asking how much of the country’s forest cover is left.

According to the Forestry Division, under the Ministry of Agriculture, Lands and Fisheries, the most recent data on the country's forest cover was seven years ago.

An EMA report dated 2012 noted 32 percent forest cover, with an average decrease of 0.31 percent per year.

In 2002, the EMA reported that over 50 percent of the country’s wetlands have disappeared.

A Ministry source said to LoopTT that there has not been any word on when the next assessment will take place.

Since 2012, illegal quarrying, squatting, highway development projects and other housing projects have decreased the country’s overall forest cover – of this, 32 percent of T&T’s land and 0.1 percent of its marine space is ‘protected’.

However, whether these protections are enforced is another story, says national resource management consultant Jalaludin Khan.

He said while the issue hangs in the balance, large swathes of forest reserves which were supposed to be protected have since been destroyed by quarrying, squatting, forest fires and other activities.

“We have approximately 80 percent of State-owned land, out of that, we still have a percentage which is forested with 'healthy' ecosystem areas (areas untouched by development).

“But within the last 25 to 50 years a substantial percentage of that has been fragmented. Those systems need to remain connected in order to be whole, for example Buccoo Reef is a living reef but we consider it a dying reef because it’s being impacted by external (human) factors.”

Khan said there is a lack of political will and a critical focus on resources is needed towards making this happen.

Khan said although a National Forest Policy was drafted in 2011, the proposed updated laws were not brought to Parliament for discussion.

According to Section 9.2 of the Policy, government, in collaboration with stakeholders, shall “undertake within three years of adoption of this Policy a process to establish a Forestry and Protected Areas Management Authority to administer the coordination and implementation of the National Forest Policy on the island of Trinidad”.

“Since the 70s there have been major efforts to materialise these environmental policies and laws but they were never brought to Parliament.

“What a National Parks Authority would do would be to advance the management and protection of forest reserves, wildlife sanctuaries and all those areas, as well as allocation of financial and human resources to manage those areas.

“Right now the Forestry Division does not have proper forest or wildlife protection systems, that is, systems that are modern, comprehensive and fully resourced both in laws and effective operational resources."

"There are allegedly at most, 15 game wardens, and they do not work on a 24-hour basis.”

He said that although many might ask why a state agency is needed, the current attacks on the country's forested areas shows that something must be done.

“We have a piecemeal system where we use existing laws to administrate, but in terms of cross-agency responsibilities and resources to properly manage those ecosystems, there’s not enough of an impact to keep these systems healthy.

“The National Park system has already been agreed upon as a way forward. We’ve always had a gap, every 10 years there’s been efforts toward putting national park systems in place but it struggles with each political changeover,” he said.

Khan said the Aripo Savannas, the country’s largest savanna, will receive a secondary impact from the development of the Valencia to Toco highway, which is currently under construction.

“The Savannas is an integrated ecosystem. It’s incredibly vulnerable to human development. If you fragment the Savannas with a road or create factors which can affect the water supply or migratory systems, it destabilises the ecosystem’s functions and services.

“Would a road affect a land species that uses this area? For example the ocelot, which is an inhabitant of the Savannas, would travel from the Savannas to adjacent forest reserves. The highway would cut off those routes.”

Khan said unless something is done, more forests will be lost.

“Case in point is, for example, we have something called the Valencia Reserve. I would ‘guesstimate’ that over 70 percent of the reserve has been quarried out, even though it’s a protected area by law, it’s now been almost totally wiped out,” he said.

“When you fly from the Piarco International Airport to Tobago, you can see (in the Northern Range) gigantic big potholes, cleared areas, red-dirt areas that looked like bombs dropped in the forest. That is most likely the Valencia Wildlife sanctuary.”

“Nothing of the original forest ecosystem exists there, it’s like walking on the surface of the moon. And that same encroachment is happening to other elements of the Northern Range,” he said.

Khan said this is why it is now critical to establish an agency to protect the country’s remaining forest reserves.

Khan said if something is not done now, the country’s severe drought which occurred this year could be just the beginning of a range of environmental disasters.

“I would say it's reached crisis levels. It’s at the tipping point now. For example, the surface water resource crisis we’re having now is because we need functioning forest systems and aquifers. How long can we sustain converting salt water to drinking water when we could have natural systems creating and sustaining our water resources?

“The whole environmental policy on a global level advocates for a national park and protection agency as the primary body for terrestrial and marine ecosystem management.”

“On an island ecosystem, it’s even more of a crisis to manage these smaller scale ecosystems.”

“Once we have an administrative system to properly manage and implement the laws we already have in place, we can actually address these environmental issues,” he said.

Squatters coming into forests on a ‘weekly basis’

A representative from the Forestry Division, which is a sub-division within the Ministry of Agriculture, Lands, and Fisheries currently overseeing the country’s forest reserves, said in some parts of the Northern Range, squatters come in on a weekly basis to settle in protected forest reserves.

“Right now we have to deal with people coming almost on a weekly basis.  We try to meet them before they get too advanced. Our laws right now restrict our powers, we can stop them from cutting down trees. It has been going on for some time and the problem is that it’s continuing and not being properly addressed.”

“At the end of the day we have to manage it but we don’t have the resources. We only have one officer in charge of that area, and there’s not that much he can do.”

The source said there are a total of five officers on duty for all of the country’s protected forest reserves.

“We try our best with what we have. We’re hoping that the new policy will come in and allow us to get the necessary equipment,” he said.

The source said there are a limited number of sites under supervision such as the Caura River and other popular nature sites.

He said recently there were consultations with the FAO to develop national parks – some of the areas include the Caroni Swamp, Nariva Swamp, Bush Bush, the Trinity Hills, and the Aripo Savannas.

He said the new draft policy would soon be published online.

Under the Forests Act, every Forest Officer, rural constable and police officer is authorised to prevent the commission of any forest offence.

Minister of Agriculture, Lands and Fisheries, Clarence Rambharat, said currently the protection of national parks falls under the Forestry Division, and changes are being made to ensure that National Parks are given more prominence.

He said in June, a comprehensive plan to increase protection of protected areas was completed through an EU/Food and Agricultural Organisation (FAO) funded project.

Since then, the fine for illegally clearing State land was increased to $50,000 along with a 10-year prison term.

He said there are other measures to be implemented in accordance with the Protected Areas System Plan for increased protection of sensitive areas.

The goal of the policy is to “the sustainable management of the forest resources of Trinidad and Tobago to provide for the social, economic, ecological, cultural and spiritual needs of present and future generations; contribute to the sustainable development of the country; enhance the quality of human life, while at the same time protecting biological diversity and ecological processes”.

- The lack of a mechanism to enable systematic revision of 1942 Forest Policy, in light of national policy, legislative, and socioeconomic realities.

- Several policies and laws of relevance to forest management overlap, and provide unclear management direction, or in extreme cases are in direct conflict.

- There are cases where specific policy statements and legal instruments need to be created de novo, or existing ones are in need of amendment to enable implementation of international and regional treaty agreements.

- There is a need to enhance and support role of civil society and the private sector in forest management.

- National laws and policies do not take full cognisance of specific management challenges in Tobago.