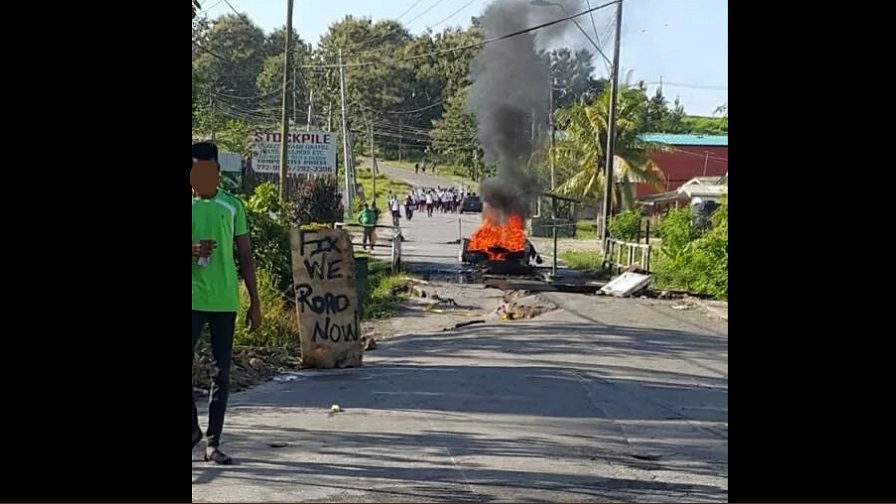 After a fiery protest at Garth Road, Williamsville over poor roads, which led to two men being held by police, repairs were started by the Ministry of Works and Transport on Thursday.

Police said they detained two men after the two men were allegedly caught lighting debris on fire on the roadway on Wednesday morning.

Police said the men had been repeatedly cautioned about their actions.

However, the frustrated residents did not adhere to the police instructions, and as a result, they were detained and taken to the Princes Town Police Station.

Investigators are awaiting instructions from senior officers on if the two men should be charged.

Residents said they decided to block the roadways out of frustration after they received no replies to their calls for help.

Residents said they would continue to block the roadway if the repairs were not done.

However, the Ministry said in a statement issued Thursday that engineers have mobilized equipment on the site of the bridge and repairs are underway.

The Ministry said shoring and piling works are expected to be performed from Thursday leading into the weekend. Subsequently, street restoration works will begin.

The collapsed roadway, which occurred some weeks ago, was caused by a ruptured water main. The Ministry said the Water and Sewerage Authority (WASA) has since fixed the broken main.

Teachers to meet: No school on Friday

Police Commissioner's wife calls for civilian use of pepper spray