Two Trinis to head to the US for NASA internship 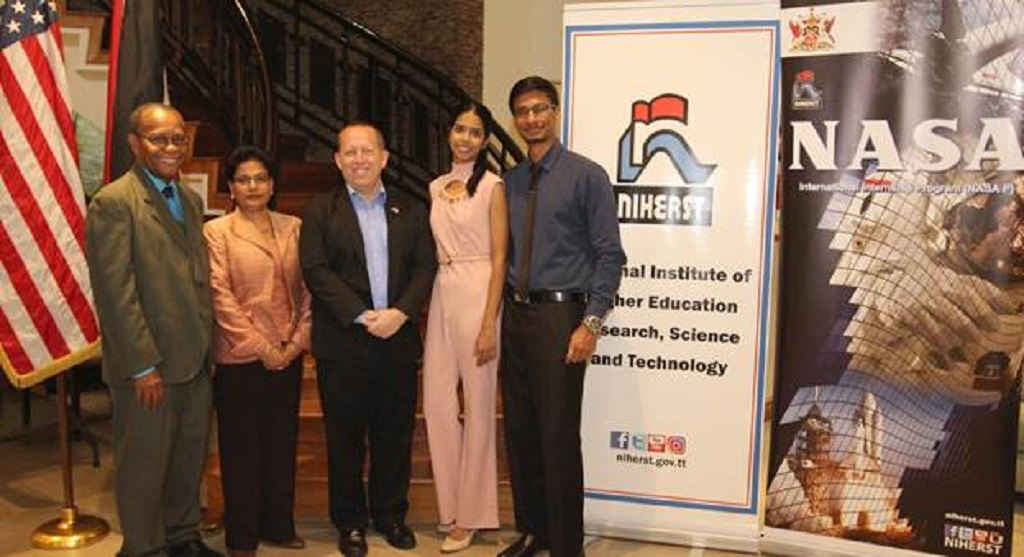 Two Trinidadian students from the University of the West Indies (UWI) St Augustine campus were selected to represent T&T in a six-week internship program, the NASA International Internship (NASA I2), at the NASA Ames Research Center in Mountain View, California.

They are both scheduled to begin their internships on June 18 and end on August 24, 2018.

Keenan Chatar, 24, is currently pursuing his MASc in Electrical and Computer Engineering and Ariel Chitan, 23, has just completed her final year in reading for her BSc in Physics and Mathematics.

Chatar and Chitan were among four shortlisted candidates that were selected following a rigorous local screening process that involved more than 20 of the nation’s brightest students studying science, technology, engineering and mathematics (STEM).

Facilitated through NIHERST, NASA then selected the top two candidates for the 2018 Summer internship cycle.

Chatar’s research at NASA will be centred around On-Demand Manufacturing in Space which involves sending supplies and spare parts to the ISS. Chitan’s project will focus on Aeromechanics research activities that directly support the civil competitiveness of the US helicopter industry and the Department of Defence.

They will be conducting cutting-edge research under the mentorship of senior scientists at NASA as well as attending lectures and seminars at leading research centres, visiting state-of-the-art laboratories and interacting with some of the world’s best minds in STEM.

Following the signing of an agreement between NIHERST and NASA in 2012, (which was subsequently renewed in 2015), the NASA I² program was developed to facilitate a structured educational exchange among students from Trinidad and Tobago, US interns and visiting university students from abroad, under the mentorship of a member of NASA’s science and engineering workforce.

The first cycle of this partnership was implemented in 2014 with two nationals being sent off to the NASA Ames Research Centre for the four-month fall internship after a stringent local screening process. The program has had continued success in 2015, both in the sixteen-week spring internship and the ten-week summer internship whereby the past interns returned alongside two newly selected ones, to continue their research at NASA’s request.

The program is intensive with an emphasis on group work, teamwork, research and creativity. The content balances science and technology with issues of management, finance and social and human issues faced by aerospace professionals.

NASA astronaut, 1st to fly untethered in space, dies at 80

NASA spacecraft will aim straight for sun next year