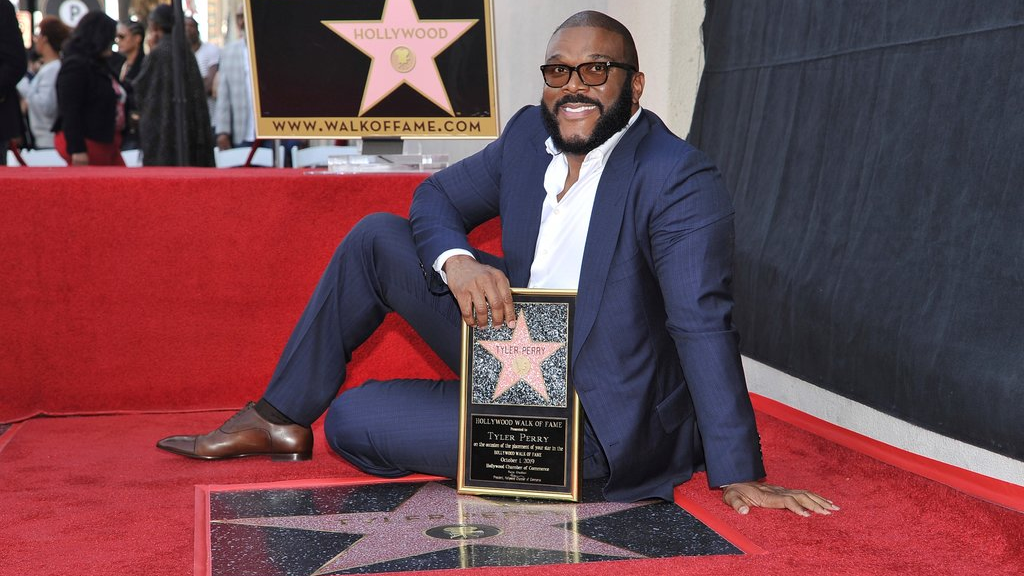 Filmmaker/actor Tyler Perry, known for the "Madea" films, poses atop his star on the Hollywood Walk of Fame on Tuesday, Oct. 1, 2019, following a ceremony in Los Angeles. (Photo by Richard Shotwell/Invision/AP)

Tyler Perry remembered shedding tears when he saw an Atlanta highway exit bearing the name of his television and film studio for the first time.

The actor-director-writer believes he might have the same emotions during the grand opening of his massive state-of-the-art Tyler Perry Studios on Saturday night. He's planning a star-studded unveiling of his 330-acre studio, where some big projects have already been filmed including his "Madea" films along with AMC's "Walking Dead" and Marvel's blockbuster hit "Black Panther."

"When I came here in 1992, I came with a dream," Perry said in a recent interview. "I'm looking at everything I've dreamed and more to come to pass. It just reminds me. I just thought this was the Promised Land and that sign reminded me of that every time I pass it. The studio is a reminder as well."

Perry said his sprawling studio rivals other major Hollywood studios including Warner Bros. and Paramount Pictures. It's considered one of the largest production studios in the country with 12 soundstages, 40 buildings on-site that are listed on the National Register of Historic Places and more than 200 acres of green space.

The filmmaker built the studio on a former Army base called Fort McPherson, which is south of downtown Atlanta, after purchasing the land in 2015.

"I gave them the absolute best," he said. "I built the absolute best I could. We perform and run this place like a top. We have excellent service and everything you would expect to have in a major film television studio. People are glad to shoot here. A lot of them want to return because of the way we handled it."

Perry went from being homeless to become a force as a filmmaker to now being honoured with a star on the Hollywood Walk of Fame, which he received Tuesday. His career has been built on the success of his "Madea" stage play tours and movies along with his "Why Did I Get Married?" films.

He recently partnered with Viacom to launch the BET Plus streaming service, which debuted last month. He'll also have two new drama series, "The Oval" and "Sistas," premiere on BET this month.

But with all his accomplishments, Perry said Hollywood still has a hard time understanding the value of his content, which has gotten what he calls "undying" support from African Americans. He said the industry also struggles to realise the "power of the black dollar" and the amount of work he's put into each project.

"Nobody in Hollywood believes that I'm sitting around and writing seven series by myself," he said. "I have no writer's room because nobody else is writing anything. I'm writing everything. There's nobody else directing any of the shows. I'm on (the) set directing every show. That's so rare for the town. They can't even wrap their brains around it. On these TV shows, they shoot three, four or five pages a day. I'm shooting 90 pages a day. It's very difficult for them to even wrap their brains around that to understand. So I feel like they don't get it. If they did understand, they would realise that there's a lot to Hollywood that could change or should change."

One place Perry believes he can continue to make a difference is through his studio. He's known for creating opportunities for African Americans and other people of colour to work on his sets since opening a 200,000-square-foot studio in 2006. He sold that studio a few years ago after he moved to his current location.

Perry believes his films and owning a studio could have a lasting impact on his legacy. But he wants the studio to become a beacon to inspire other filmmakers with the hope of keeping it in the family.

"I think they will go hand in hand," Perry said of his filmmaking career and studio ventures. "But I think this brick-and-mortar of the studio speaks volumes because it's not about my dream. It's about all the other people that are able to come in and build dreams and share dreams and tell their stories as well. I hope it lives on forever and ever. And if my son wants to take it over, that would be even better."

A scary box office weekend for everyone but Tyler Perry