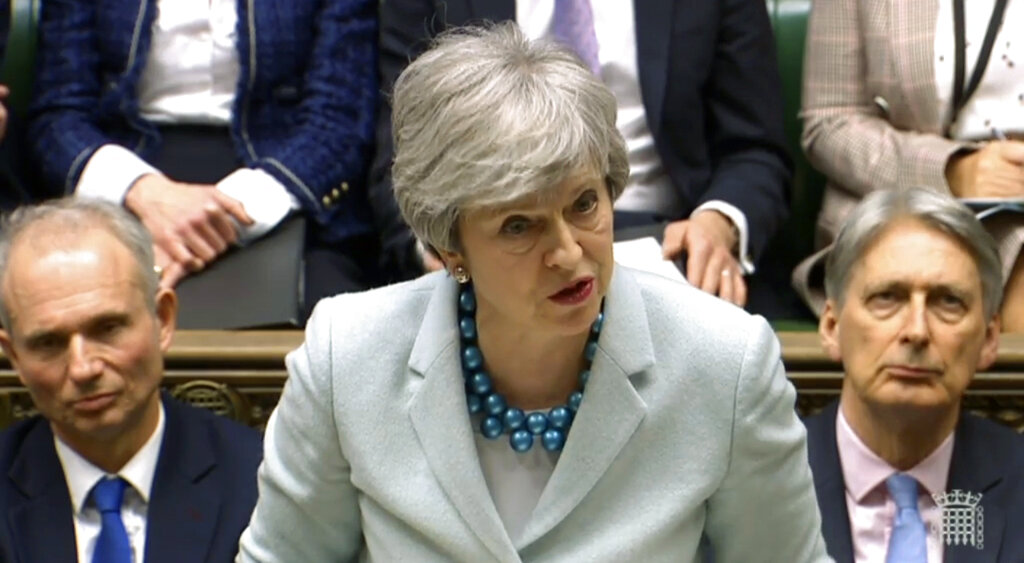 The House of Commons voted late Monday to wrest the parliamentary timetable away from the government temporarily so that lawmakers can vote on alternatives to the withdrawal agreement May negotiated with the EU.  The government, which usually controls the scheduling of votes in Parliament, said the lawmakers' move "upends the balance between our democratic institutions and sets a dangerous, unpredictable precedent for the future."

But Health Secretary Matt Hancock told the BBC that the government won't "pre-commit" to accepting the option backed by lawmakers because they may come up with a plan that is impractical.

"If the Commons voted for the sun to rise in the west, the government would not be able to implement that," he said.

"The best way through this impasse is the one deal that has been negotiated with the EU that can be delivered quickly now," Hancock said, referring to the prime minister's agreement.

May's authority is hanging by a thread after 30 members of her Conservative Party defied her instructions and voted for Parliament to take control of the process. Three government ministers resigned rather than vote with the government.

Almost three years after Britons voted to leave the EU, the date and terms of its departure are up in the air.  Last week the EU granted Britain a delay to the scheduled March 29 exit date, saying that if Parliament approved the proposed divorce deal, the U.K. would leave the EU on May 22. If not, the government has until April 12 to tell the 27 remaining EU countries what it plans to do — leave without a deal, cancel Brexit or chart a path to a new option.

May is continuing to push for approval of her deal with the EU even though the House of Commons overwhelmingly rejected it during votes in January and March.

She has warned pro-Brexit legislators that continuing to reject the deal could lead to a "slow Brexit" that postpones the country's departure indefinitely.

Richard Harrington, who resigned as a business minister to vote in favor of Monday's motion, accused the government of "playing roulette" with people and businesses lives by failing to resolve Britain's Brexit impasse.

Lawmakers who backed Monday's motion, which passed 329-302, hope to find an alternative that can command a majority in Parliament by holding a series of "indicative votes" on other options. Those alternatives could include a "soft Brexit" that maintains close economic ties with the EU or scrapping Brexit entirely.

Jacob Rees-Mogg, a leading pro-Brexit Conservative, acknowledged that "the choice seems to be Mrs. May's deal or no Brexit."

Cabinet ministers gathering Tuesday for their regular meeting were expected to demand that Conservative Party lawmakers be allowed to follow their consciences, rather than vote the party line, during the debate Wednesday on alternatives to the prime minister's deal.

"Parliament should seek urgently to resolve the situation by considering alternatives freely, without the instruction of party whips, and government should adopt any feasible outcome as its own in order to progress matters," said Alistair Burt, who quit his role in the Foreign Office after defying May on Monday.

"I did not believe the government was prepared to do that, so had to vote to ensure this happens."

For EU, Brexit has trashed May's 'strong and stable' image

The Latest: May asks for delay of Brexit until June 30

EU leaders open to Brexit delay, but May faces storm at home