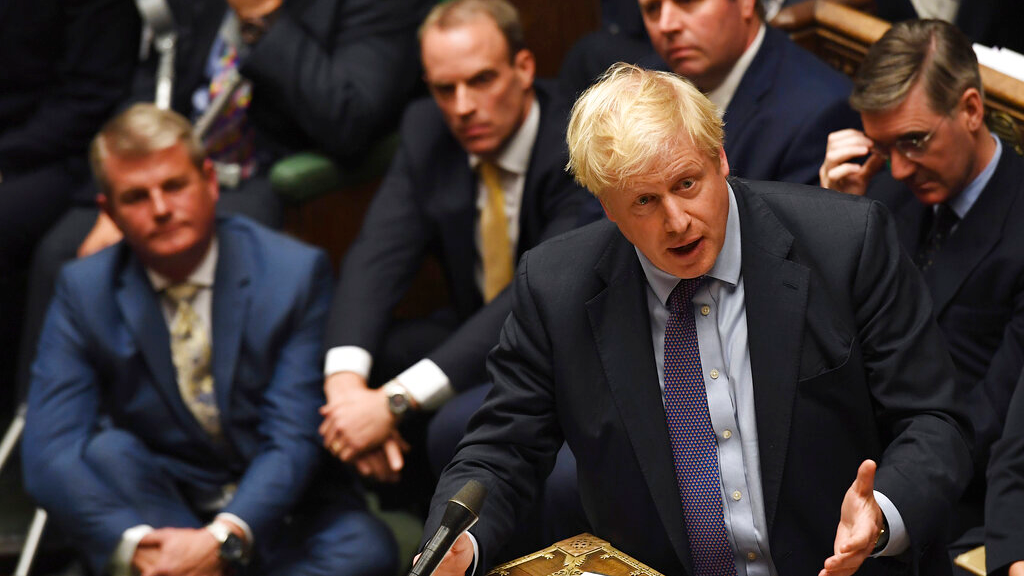 British Prime Minister Boris Johnson was weighing Wednesday whether to push for an early election or try again to pass his stalled European Union divorce deal after Parliament blocked a fast-track plan to approve his Brexit bill before the UK's scheduled departure from the bloc on October 31.

Lawmakers backed the substance of Johnson's divorce deal in principle late Tuesday but rejected the government's plan to fast-track the legislation through Parliament in a matter of days, saying it didn't provide enough time for scrutiny.

The government is now waiting for the EU's response to its request for a three-month extension to the Brexit deadline.

European Council President Donald Tusk said in a tweet that because of Tuesday's votes in London he would recommend that the other 27 EU nations grant Britain a delay to its departure to avoid a chaotic no-deal exit in just eight days.

European Parliament President David Sassoli echoed that sentiment, saying that European leaders should accept the Brexit extension because that will "allow the United Kingdom to clarify its position and the European Parliament to exercise its role."

But in London on Wednesday, talk quickly shifted to holding an early election.

British Justice Secretary Robert Buckland told the BBC that Parliament's failure to break the logjam means "we are left with the option of a general election ... That seems to me to be the only way to break this impasse."

Britain's next scheduled election is in 2022. If Johnson wants an early election, he needs to win a vote in Parliament to call for an election or lose a no-confidence vote, which so far opposition parties have refused to call.

The main opposition Labour Party, whose leader Jeremy Corbyn met with the prime minister on Wednesday, said it would "support a general election when the threat of a no-deal crash-out is off the table."

But some lawmakers urged Johnson to push on with passage of the Brexit bill, saying it could pass if lawmakers had time to study it properly.

"I would have thought it can be done in a matter of weeks," said Labour lawmaker Richard Burgon.

Johnson won a major parliamentary victory on Tuesday when lawmakers in principle backed his Brexit plan, voting 329-299 to pass a bill to implement the divorce agreement that Johnson struck with the EU last week. But minutes later, legislators rejected his fast-track timetable by a vote of 322-308, saying they needed more time to scrutinise the bill.

Without speedy passage of the bill, Britain won't be able to make an orderly exit from the bloc on October 31, a central vow of Johnson's three-month-old Conservative administration.

House of Commons leader Jacob Rees-Mogg conceded Tuesday that "it is very hard to see how it is possible" to leave the EU with a deal on October 31.

Johnson had grudgingly asked the EU to delay Brexit to comply with a law passed by Parliament ordering the government to postpone Britain's departure rather than risk the economic damage that could come from a no-deal exit.

All 27 other EU leaders must agree to an extension, which would be the third time Britain's departure date has been postponed.

Johnson has not abandoned his Brexit deal, which sets out the terms of Britain's departure from the EU after almost five decades of membership. It will form the centerpiece of his Conservative Party's campaign if there is an early election.

Johnson hopes an election will give his Conservatives a majority in Parliament so he can push through his plans.

"One way or another, we will leave the EU with this deal to which this House has just given its assent," Johnson told lawmakers after Tuesday's votes.