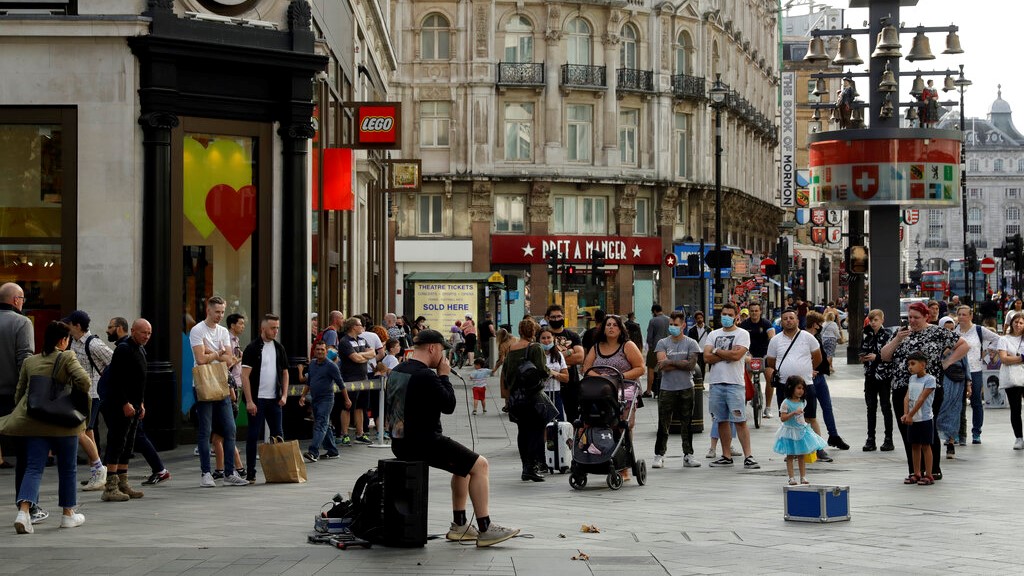 Britain's top medical advisers on Monday painted a grim picture of exponential growth in illness and death if nothing is done to control the second wave of coronavirus infections, laying the groundwork for the government to announce new restrictions later this week.

After a slow rise in COVID-19 infections over the summer, the number of new cases is now doubling every seven days, and if nothing is done to slow the spread of the disease this could lead to as many as 49,000 cases a day by mid-October, Chief Scientific Officer Patrick Vallance told the public during a televised briefing.

The experience in other countries shows that this increase in infections will soon lead to a rise in deaths, Chief Medical Officer Chris Whitty added.

"We have, in a very bad sense, literally turned a corner," after weeks of rising infections, Whitty said.

Prime Minister Boris Johnson later this week is expected to announce a slate of short-term restrictions that will act as a "circuit breaker" to slow the spread of the disease. He huddled with other ministers over the weekend to discuss the government's response.

Whitty stressed that infection rates are rising among all age groups and said that it is not acceptable for individuals to ignore health guidelines and engage in risky activity. Everyone must do their part to slow the spread of the disease because infections among the young and healthy will inevitably spread to their friends and family members and ultimately to the most vulnerable in society.

"This is not someone else's problem," he said. "This is all of our problem.''

The government is hoping to slow the spread of COVID-19, which last week pushed new cases to levels not seen since early May. Almost 3,900 new infections were reported on Sunday, compared with a peak of 6,199 cases on April 5.

While death rates have remained relatively low so far, Whitty warned that deaths are likely to rise in coming weeks. The UK reported a seven-day average of 21 deaths a day last week, compared with a peak of 942 on April 10.

These numbers include only deaths that are directly related to COVID-19. The real toll could be much higher if emergency services are overwhelmed by coronavirus cases and the National Health Service has to divert resources from diagnosing and treating other diseases, Whitty said.

But Whitty said this has to be balanced against the impact on the economy and society from measures to control the virus, because increased deprivation and mental illness will also lead to deaths.

"Ministers making decisions — and all of society — have to walk this very difficult balance. If we do too little, this virus will go out of control and you will get significant numbers of increased direct and indirect deaths,'' he said "But if we go too far the other way, then we can cause damage to the economy which can feed through to unemployment, to poverty, to deprivation — all of which have long-term health effects so we need always to keep these two sides in mind."

The government last week stopped short of imposing a total lockdown in northeastern England, where the infection rate first began to rise. Instead, bars and restaurants were ordered to close between 10pm and 5am and people were prohibited from socializing with individuals from other households.

The rise in infection rates comes as lawmakers across the political spectrum criticize the government's testing programme. While government ministers tout the record numbers of tests being performed, there are widespread reports of people having to travel hundreds of miles for tests and tests being voided because it is taking labs too long to process them.

An effective testing programme is seen as essential to controlling the pandemic because it allows the government to track infections and inform people when they should self-isolate.

French Open capacity reduced to 5,000 per day amid coronavirus spike

The Latest: WHO calls for consistent message on virus