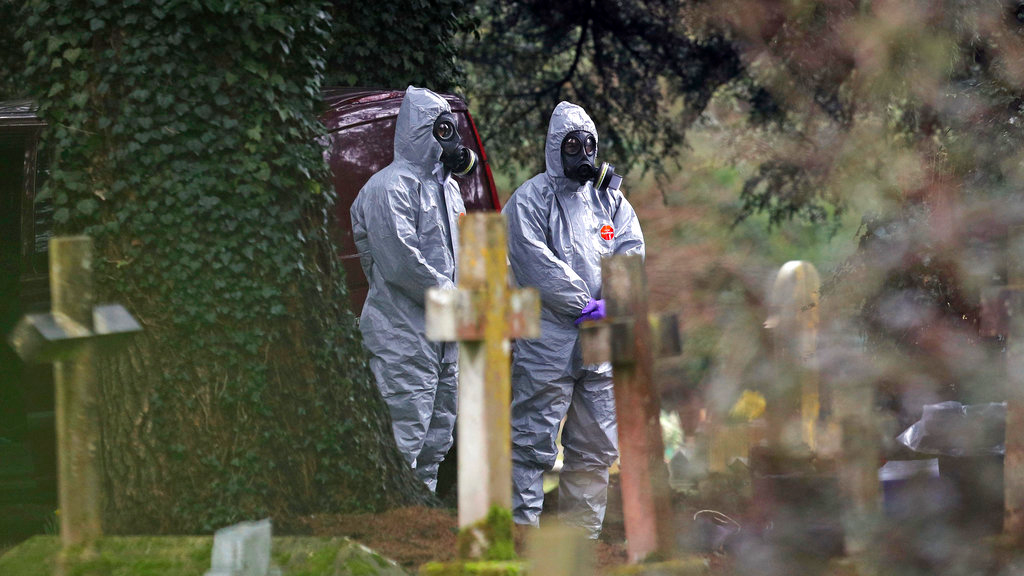 Forensic officers work at the cemetery in Salisbury, England. (PA via AP)

British health authorities on Sunday urged people to wash their clothing and possessions as a precaution if they visited a restaurant and pub in the English city of Salisbury, where a Russian ex-spy and his daughter were poisoned with a nerve agent.

The official statement was the first time British officials have urged the public to take specific actions as a result of the attack. Officials still say the risk is low as investigators in hazard gear combed key sites for clues.

Public Health England issued advice for anyone who went to either the Zizzi restaurant or The Mill pub at certain hours of March 4 and 5. Ex-spy Sergei Skripal and his daughter Yulia reportedly ate at Zizzi before falling critically ill on March 4.

"While there is no immediate health risk to anyone who may have been in either of these locations, it is possible, but unlikely, that any of the substance which has come into contact with clothing or belongings could still be present in minute amounts and therefore contaminate your skin," the statement said. "Over time, repeated skin contact with contaminated items may pose a small risk to health."

The health agency added that any clothing should be washed in "an ordinary washing machine using your regular detergent at the temperature recommended for the clothing."

It also said to "wipe personal items such as phones, handbags and other electronic items with cleansing or baby wipes and dispose of the wipes in the bin."

Health officials say that up to 500 people may have to take these precautions. The government, meanwhile, hasn't revealed what nerve agent was used in the attack.

A large-scale police investigation is underway in Salisbury as forensics experts wearing protective gear search for clues. Among the sites they are searching are the Zizzi restaurant, which is closed to the public, and the gravesites where Skripal's wife and son are buried. Skripal's house has also been extensively searched for clues and traces of the nerve agent.

Authorities haven't revealed how or where the Skripals were exposed to the nerve agent. It's not known if it happened in a restaurant, a pub, Skripal's house or elsewhere.

Home Secretary Amber Rudd said Saturday evening it is still "too early" to determine who is to blame for the attack. Senior government officials have vowed to respond robustly if the Russian government is found to be responsible.

Rudd said more than 250 counterterrorism officers are on the scene evaluating more than 240 pieces of evidence and interviewing about 200 witnesses.

They are backed by roughly 180 military personnel providing logistical support, including the removal of ambulances feared to possibly be contaminated by the nerve agent.

Police are looking for precise clues to what sickened Skripal, 66, a Russian ex-military intelligence specialist who in 2006 was convicted in Russia of spying for Britain, and his 33-year-old daughter, Yulia.

Investigators hope they can pinpoint where the nerve agent was made, which could help determine who was behind the attack.

Skripal was imprisoned inside Russia until he was freed in a 2010 spy swap and settled in England. He had stayed out of the public eye since then.

The father and daughter were found unconscious March 4 on a bench in Salisbury. Skripal lived in the town, located 90 miles (140 kilometers) southwest of London.

Authorities haven't said whether they expect the pair to recover.

Some British lawmakers have asked for a high-level investigation of a string of serious mishaps involving former Russia spies and foes of Russian President Vladimir Putin who have taken up residence in Britain.