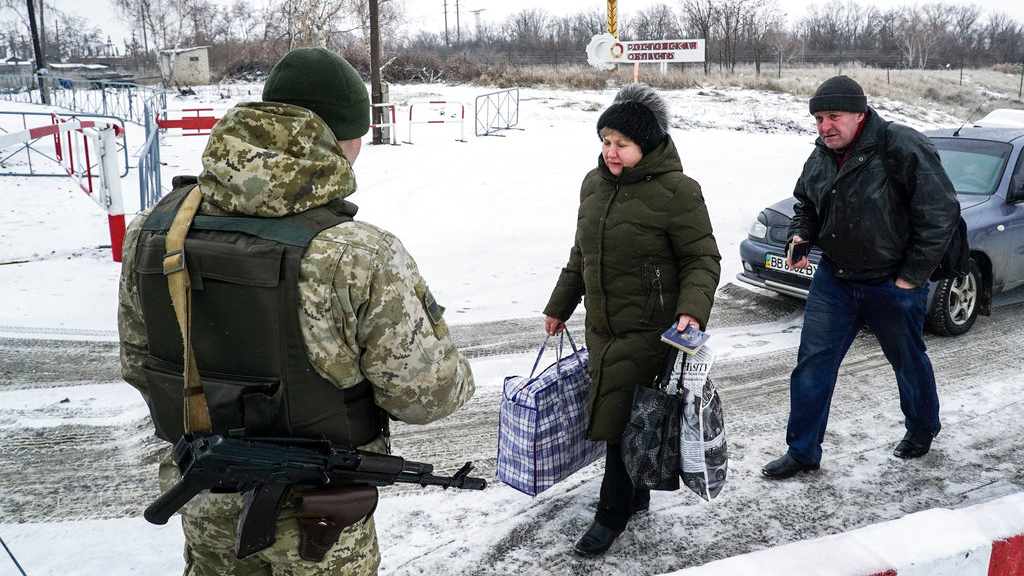 Ukrainians cross the border from Russia to Ukrainian side of the Ukraine - Russia border in Milove town, eastern Ukraine, Sunday, Dec. 2, 2018. On a map, Chertkovo and Milove are one village, crossed by Friendship of Peoples Street which got its name under the Soviet Union and on the streets in both places, people speak a mix of Russian and Ukrainian without turning choice of language into a political statement. (AP Photo/Evgeniy Maloletka)

Ukraine's president on Monday announced a partial call-up of reservists for training amid tensions with Russia, saying the country needs to beef up its defences to counter the threat of a Russian invasion.

The Kremlin dismissed the Ukrainian leader's statement as an "absurd" attempt to inflame tensions.

Relations between the two neighbours have been strained further following a Nov. 25 incident in which the Russian coast guard fired upon and seized three Ukrainian naval vessels and their crews off the Crimean Peninsula that Russia annexed from Ukraine.

Ukrainian President Petro Poroshenko responded by introducing martial law for 30 days in much of Ukraine. For the duration of martial law, Ukrainian authorities barred entry to all Russian males aged 16 to 60 in a move the Ukrainian leader said was needed to prevent Russia from further destabilizing the country.

Poroshenko said Monday that some reservists will be summoned for training as part of martial law. He also said that some military units will be redeployed to strengthen the nation's defences.

"Ukraine is taking its own steps in response to the threat of a large-scale Russian invasion," the Ukrainian leader said.

Over the weekend, Poroshenko said that Russia has deployed a large number of troops along its border with Ukraine and alleged that the Kremlin intends to push inland into Ukraine. Ukraine also accused Russia of blockading its ports on the Sea of Azov.

"The accusations against Russia have no basis whatsoever," he said.

Peskov also rejected Kiev's claim that Russia was blocking traffic to and from Ukrainian ports on the Sea of Azov, saying that navigation has continued normally except for occasional breaks because of bad weather.

Amid the tensions, the Russian military said its forces in Crimea were conducting drills involving Bal and Bastion long-range anti-ship missile systems.

In the Nov. 25 incident, three Ukrainian naval vessels were heading from the Black Sea into the Sea of Azov when they were blocked by the Russian coast guard near the Kerch Strait between Russia's mainland and Crimea. After many tense hours of maneuvering, the Russians opened fire and seized the Ukrainian vessels and 24 crew members.

The Ukrainian seamen have been put in custody for two months pending Russia's investigation into the clash.

Ukraine and Russia have traded blame for the naval incident that further escalated the tug-of-war that began in 2014 when Russian annexed Crimea and backed separatist rebels in eastern Ukraine. Ukraine charged that its ships were in international waters while Russia said the boats were violating its border.

Poroshenko has said he tried to arrange a phone call with Putin to discuss the standoff but faced the Kremlin's refusal.

Peskov said Monday that "no such conversation is planned."

US agrees to send lethal weapons to Ukraine, angering Russia