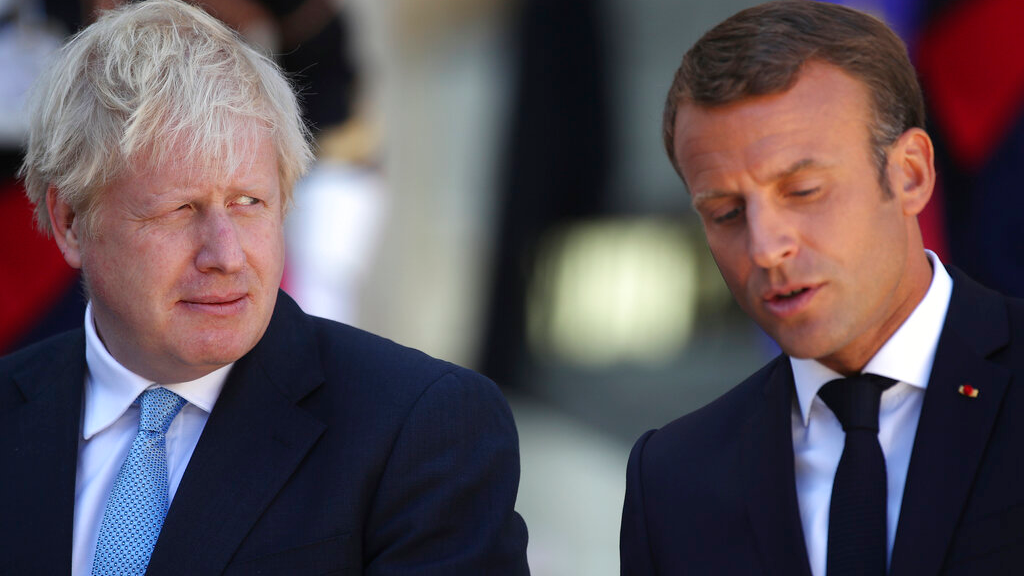 After ticking off examples of close ties between the two countries, Johnson turned on a charm offensive, stressing that the U.K. wants a Brexit deal with EU. But even as he chummily called the French leader by his first name, Johnson added it was his duty to carry out the wishes of the British people, who by a narrow margin voted to leave the EU.

"As you yourself have just pointed out, Emmanuel, it is vital for trust in politics, that if you have a referendum, then you should act on the instructions of the voters. And that is why we must come out of the EU October 31, deal or no-deal," Johnson said. "Then, of course, we can take our relationship forward. I agree with you wholeheartedly Emmanuel that it is a quite extraordinary relationship."

But even as he smiled for the cameras, Macron dampened expectations, stressing "we have to respect what was negotiated." He also reiterated what the EU has been saying for months — that it won't re-open the Brexit withdrawal deal negotiated with Britain's previous prime minister, Theresa May.

That Brexit deal includes an insurance policy known as the Irish backstop, which would keep the U.K. closely aligned in trade with the EU if the two sides can't find another way to prevent the return of checks on the border between Northern Ireland and the Republic of Ireland.

Macron said that the backstop is indispensable. Johnson repeatedly countered that Britain would not place checks at the border, raising the possibility that the EU would be forced to decide how to deal with that land border between the U.K. and the EU.

Johnson was buoyed Wednesday by German Chancellor Angela Merkel, who raised the possibility in talks Wednesday that a negotiated departure from the EU may still be possible if Britain comes up with alternative plans for the Irish border within 30 days.

Macron did not discount that some movement was possible. He said he agreed with Merkel that "something clever" could be found in the next 30 days.

"I was always said to be the tough one of the gang," he said because he had made it "very clear" a deal that would endanger the EU would not be acceptable.

But it was clear that such concessions did not reach to changing a deal that was hard-won on the European side.

Macron, a pro-business centrist, has been elected in 2017 on a promise to make Europe stronger to better protect EU citizens.

Macron also insisted the EU single market must be preserved. Otherwise, that would mean telling EU citizens "we can't protect you as consumers and producers anymore because we must be nice to Mr. Johnson. No!" he said.

Macron added that France is prepared for a no-deal Brexit, even though that's not the country's preferred option.

Johnson is seeking concessions from the EU to win support in the British Parliament, which has already rejected three times the agreement negotiated by May.

Johnson became prime minister last month when May stepped down after failing to secure parliamentary approval for the Brexit divorce deal.

The EU has twice delayed Britain's departure date, which is now scheduled for Oct. 31. Johnson says Britain will leave the EU on that date, with or without an agreement, raising concerns about economic damage on both sides of the English Channel.

The EU says the backstop is merely an insurance policy meant to avoid checkpoints that were a flashpoint for sectarian violence in the past, and won't be needed if other solutions are found to regulate goods moving across the border.

But technological solutions have so far proved inadequate, and it is unclear what new proposals Johnson may offer in the next few weeks.

Boris Johnson to take office, aiming to win over doubters