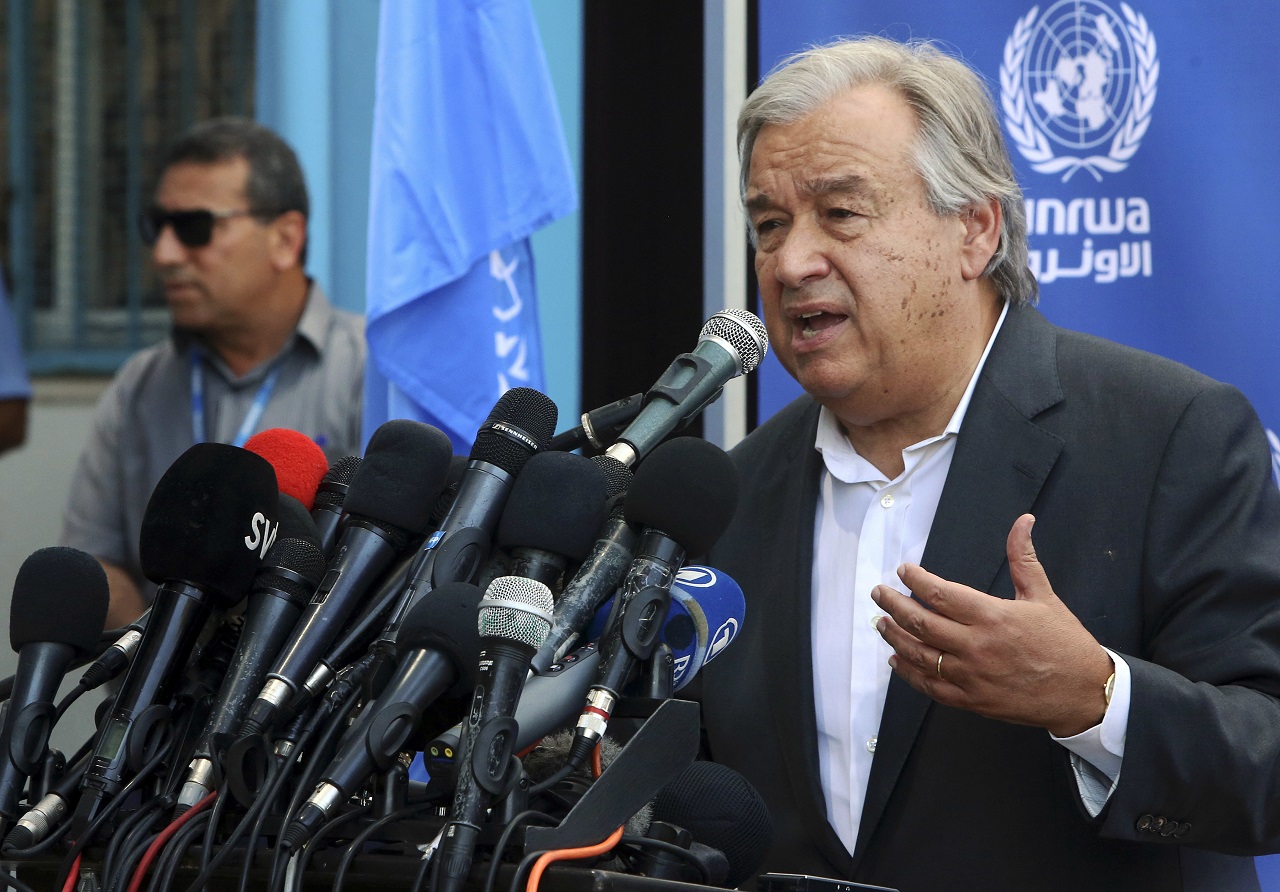 The U.N. secretary-general on Wednesday urged Israel to ease its blockade of the Hamas-ruled Gaza Strip and called for large-scale foreign aid, saying the situation in the isolated territory is "one of the most dramatic humanitarian crises" he has seen.

Speaking at a U.N.-backed elementary school in the northern Gaza Strip, Antonio Guterres also called for unity among the Palestinians' warring factions — Hamas, which rules Gaza, and Fatah, the party of Palestinian President Mahmoud Abbas.

"The division only undermines the cause of the Palestinian people," he said. In an apparent message to Hamas, he said "militantism" was causing damage to the region, adding that he had a dream to "come back to Gaza one day and to see Gaza as part of a Palestine state in peace and prosperity."

Guterres is on his first visit to the region since taking office at the beginning of the year. During a four-day visit that was ending Wednesday, he met with Israeli and Palestinian leaders to encourage the resumption of peace talks.

His stop in Gaza was meant to draw attention to the seaside territory, where conditions have steadily deteriorated since the Islamic militant group Hamas seized power a decade ago.

Israel, backed by Egypt, has maintained a blockade on Gaza, saying the measure is needed to prevent the group from smuggling weapons and fighters. Hamas seeks Israel's destruction, and the two sides have fought three devastating wars.

Years of conflict and isolation, compounded by the divide with the rival Fatah-led Palestinian Authority, have ground Gaza's economy to a standstill. Unemployment is over 40 percent, and the territory suffers from power outages of up to 20 hours a day.

"I am deeply moved to be in Gaza today, unfortunately, to witness one of the most dramatic humanitarian crises that I have seen in many years working as a humanitarian in the United Nations," Guterres said.

In his speech, Guterres said it was crucial that peace talks aimed at establishing an independent Palestinian state alongside Israel begin. But at the same time, he called for a "program of action" to improve conditions and announced $4 million in emergency aid for U.N. activities in Gaza.

Guterres did not meet with Hamas officials. But the group, which is considered a terrorist group by Israel and its Western allies, demanded he work to lift the Israeli-Egyptian blockade.

Hamas also demanded he approve relief and development programs and pressure Israel about the Palestinian prisoners it holds.

Israel blames Hamas for Gaza's woes, saying its tough policies are a response to the group's attempts to build cross-border attack tunnels and its development of rockets capable of striking deep into Israel. Hamas is also holding two Israeli civilians and the remains of two Israeli soldiers. Critics say the Israeli blockade amounts to collective punishment.

Prior to arriving in Gaza, Guterres took a helicopter tour of the Israel-Gaza border with Israeli officials, visited a tunnel Hamas dug into Israel to carry out attacks and met local residents living along the volatile front.

"Instead of working to ensure a better future for their children, Hamas has turned the residents of Gaza into hostages," Danon said. "At the same time, the Israeli residents of the border communities have stood strong in the face of terror threats, as they build prosperous communities and help further develop the region for the betterment of the next generation."

Hamas has ruled Gaza since seizing control of the coastal area in 2007 from forces loyal to Abbas. Repeated attempts at reconciliation have failed.

Hamas has since fought three wars with Israel, firing thousands of rockets into its territory and digging a network of offensive tunnels. It has largely observed a truce with Israel since the last battle, in 2014, though more radical groups in the territory have carried out occasional attacks.

As part of the blockade, Egypt has cracked down on the once-vibrant tunnel trade along the border. Israel began construction of an underground anti-tunnel barrier along the border last year.

Guterres' visit comes as the U.S. is trying to revive peace talks for the first time in over three years.

The Trump administration has been speaking to Israeli and Palestinian officials, as well as leaders of moderate Arab countries, in hopes of finding a formula for talks. But it has not yet outlined a plan of action. It also has not endorsed the idea of Palestinian independence — the solution preferred by a string of predecessors and the international community.

U.S. envoy Jason Greenblatt toured the southern border area on Wednesday, where he visited a tunnel uncovered by the Israeli military and criticized "Hamas' mismanagement of humanitarian aid and its commitment to terrorist violence."

In a final speech in Tel Aviv, Guterres said the world must remain focused on the region, and that there was no alternative to the two-state solution.

UN Security Council weighs what to do next on North Korea