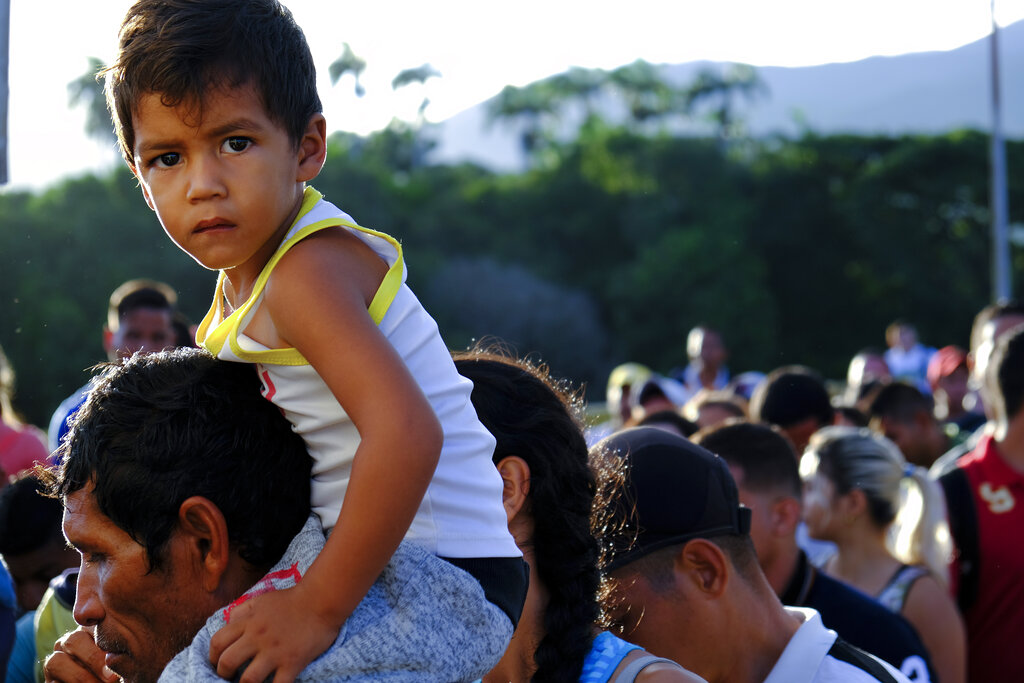 The United Nations' top human rights official urged Venezuela's government and opposition Friday to put aside deep political differences and commit to dialogue aimed at ending a humanitarian crisis showing no signs of letting up.

The comments by U.N. High Commissioner for Human Rights Michelle Bachelet came at the end of a three-day visit to the South American nation that included separate meetings with opposition leader Juan Guaidó and President Nicolás Maduro, who are locked in a prolonged struggle over control of the bankrupt country.

"The situation in Venezuela pains me because I see what's happening to the people," said Bachelet, her voice breaking during a news conference late Friday at Caracas' airport before boarding a flight back to Geneva.

The former Chilean president's trip to Venezuela, the first ever by the head of the U.N. watchdog agency, was bound to be a fraught one given the divisions caused by two decades of polarizing, socialist rule. Throughout the visit she was hounded by government opponents complaining she was being given a whitewashed view of a crisis marked by severe shortages of food, water and medicine that have driven a 4 million people to flee in recent years.

"Maduro is Pinochet," protesters shouted during one small protest, referring to the former Chilean strongman whose 1970s military dictatorship jailed and tortured Bachelet and members of her family.

Her remarks reflected the delicate mission she faces trying to rebuild respect for human rights without antagonizing a Maduro government loath to accept foreign criticism.

In an unapologetic tone, she read a long list of deteriorating social indicators while recounting a string of meetings with victims of torture and even murder at the hands of rampaging, masked security forces. She also called on the government to free from jail all those detained for "exercising their civil and political rights in a peaceful manner" — a not so veiled reference to the almost 700 activists considered political prisoners.

But she also retold her encounter with the mother of one government supporter who was burned alive by a mob of opposition protesters, and she expressed concern that U.S. oil sanctions in support of Guaidó "are exacerbating and aggravating the pre-existing economic crisis."

With those huge challenges in mind, she celebrated Maduro's decision to invite two delegates to reside in the country to more easily advise the government and monitor abuses — the first step to what she hopes will be the establishment of a permanent office in the country.

But she said the best hope for improving the lives of struggling Venezuelans is through dialogue and appealed for support for an incipient mediation effort by Norway that has led to two rounds of negotiations.

"The destiny of more than 30 million Venezuelans resides in the will and the ability of its leaders to put the people's human rights above any personal, political or ideological ambition," Bachelet said. "Maintaining entrenched positions by either of the two sides only aggravates the crisis, and Venezuelans can't give themselves the luxury of allowing their country's situation to deteriorate any further."

Her visit was something of a political feat that some hope will open space for dialogue. Her predecessor, Zeid Ra'ad al-Hussein, was repeatedly denied access to Venezuela for chastising the government's rights records.

In contrast, Maduro rolled out the red carpet for Bachelet, a fellow socialist. On the eve of her arrival, the government freed 28 opposition activists considered political prisoners, including a substitute lawmaker and 18 people detained during recent anti-government protests.

But Guaidó said that he emphasized in his closed-door meeting with Bachelet that Maduro's government is still holding two opposition lawmakers in jail. He said he also spoke with her about the need to remove Maduro from power to end Venezuela's "suffering."

"May this visit serve to bring solutions to the catastrophe that this country is experiencing," Guaidó said on the steps of the opposition-controlled National Assembly following his meeting with Bachelet. "This visit should serve to reinvigorate the fight in Venezuela."

Maduro, for his part, hailed Bachelet's visit as a "first step" in fostering stronger relations between Venezuela and U.N. human rights monitoring agency and he promised to earnestly consider her input.

"She can count on me to take her suggestions, recommendations and proposals with absolute seriousness," he said after their evening meeting.

Guaidó has failed to seize power five months after launching a campaign to oust Maduro. But he has managed to win the recognition of more than 50 nations and galvanize international opinion.

Maduro maintains that his rival's efforts are part of a U.S.-backed coup intended to remove him from office and exploit Venezuela's vast oil.

On Friday, protesters attempted to capitalize on Bachelet's visit by gathering outside the U.N. headquarters in Caracas. Some carried banners asking her for medical help, while others held empty baby strollers over their heads to call attention to crumbling hospitals that provide inadequate care to children.

Gilber Caro, an opposition politician who was released this week after two months in jail, joined the crowd.

"My liberation is a partial liberation because first and foremost we need to free the people of Venezuela," Caro said, noting that he met with Bachelet to press for an end to Maduro's rule and free presidential elections.

"Venezuelans are demanding justice, demanding liberty, but above all a political transition to democracy," he said.