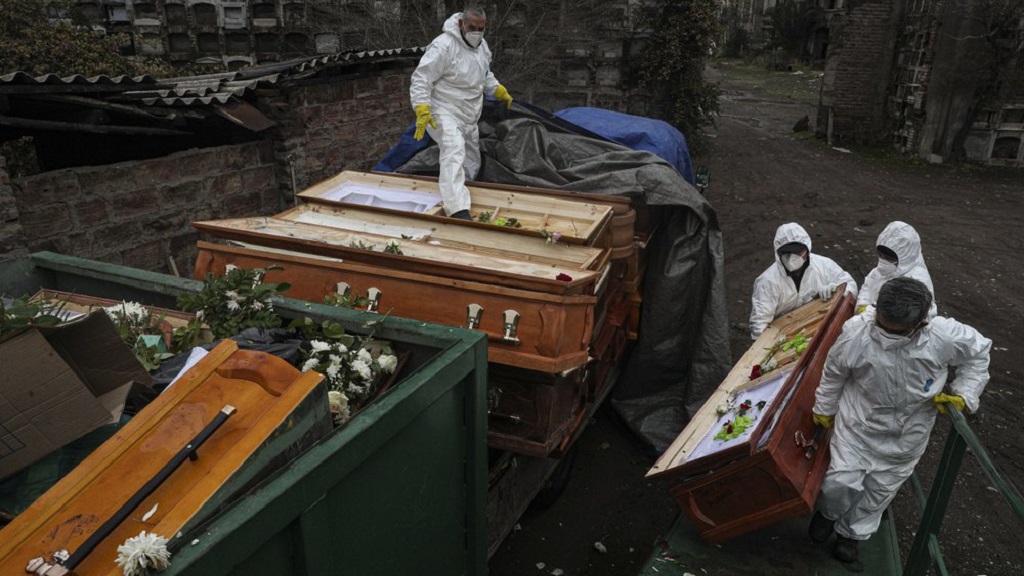 Workers collect and stack the coffins of people that have been recently cremated amid the new coronavirus pandemic at La Recoleta cemetery, in Santiago, Chile, Monday, July 6, 2020. The coffins are collected and destroyed by a company specializing in organic waste. (AP Photo/Esteban Felix)

Latin America and the Caribbean have become "a hot spot" for the COVID-19 pandemic, with several countries now having one of the highest per capita infection rates and absolute number of cases in the world, UN Secretary-General Antonio Guterres said Thursday.

The UN chief said in a video and briefing report that a 9.1 percent contraction in GDP is expected this year in the region, which would be the "largest in a century."

"COVID-19 represents a massive health, social and economic shock with an immense human toll for the countries of Latin America and the Caribbean," the report said. "It is expected to result in the deepest recession in living memory."

According to the report, unemployment in the region is expected to rise to 13.5 percent from 8.1 percent last year, affecting more than 44 million people, compared to over 18 million in 2019.

The poverty rate is expected to rise to 37.2 percent from 30.2 percent, meaning 230 million people will be affected compared to 185 million last year, it said.

Guterres said Latin America and the Caribbean already face "gaping inequalities," high levels of informal labor and fragmented health services — and the region's most vulnerable people "are once again being hit the hardest" by COVID-19.

"Women, who make up the majority of the workforce in economic sectors being most affected, now must also bear the brunt of additional care-giving," Guterres said. "Older persons and persons with disabilities are at much higher risk of death from the virus. "

He said Indigenous peoples, those of African descent, migrants and refugees "are also suffering disproportionately."

"Urban transmission of COVID-19 is of special concern to Latin America and the Caribbean as the world's most urbanized developing region," the report said.

Some 80 percent of the region's population lives in cities, the UN chief said, pointing to slums especially in the largest ones as potential breeding grounds.

With fragmented and unequal health systems, countries most affected by the pandemic — which Guterres didn't name — "are ill-prepared to handle a health and human crisis of this scale," his report said.

"In a region which experienced a significant number of political crises and protests in 2019," Guterres warned that "increasing inequalities, exclusion and discrimination in the context of COVID-19 affect adversely the enjoyment of human rights and democratic developments, potentially even leading to civil unrest, if left unaddressed."

He called on governments to do more to reduce poverty, food insecurity and malnutrition.

In the short-term, Guterres said, governments should consider providing people living in poverty with emergency basic incomes and anti-hunger grants.

This could include the possibility of providing the equivalent income of the national poverty line, or about $140 per month for the region, the report said. The estimated cost for six months would amount to 1.9 percent of regional GDP, it said.

At the same time, Guterres said, greater international support is urgently needed. "For Latin America and the Caribbean, the international community must provide liquidity, financial assistance and debt relief," he said.

The UN chief called for a post-pandemic transformation of Latin America and the Caribbean to reduce inequality that "has become untenable."