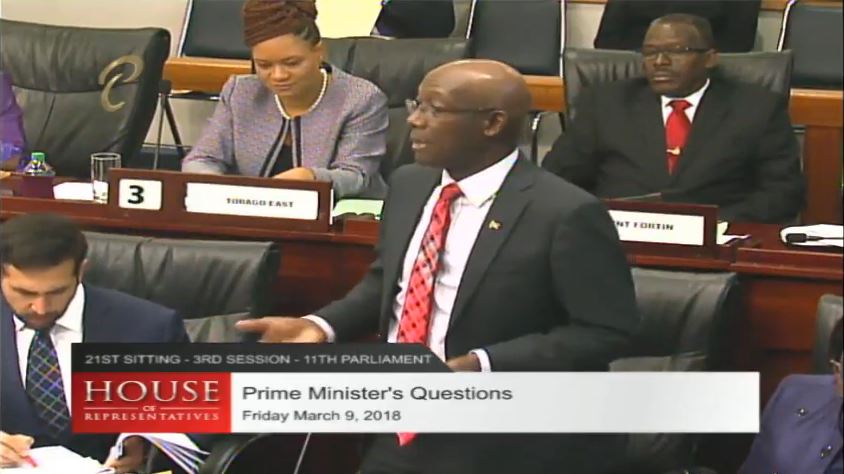 Prime Minister Dr. Keith Rowley’s behaviour in the House of Representatives on Friday 9 March, 2018 was offensive and unbecoming of the office that he holds.

That’s the view of the United National Congress (UNC).

UNC Deputy Political Leader and Opposition Chief Whip David Lee said, “It is ironic that on the very day that the Parliament unanimously passed the historic Anti-Gang Bill that the Prime Minister himself descended into the worst form of political gangsterism.”

In a statement, Lee said that Oropouche MP Dr. Roodal Moonilal posed a legitimate question to Dr. Rowley over the use of public funds to pay for MP Maxie Cuffie’s medical bills.

Following the question, Rowley challenged Dr. Moonilal to “meet him on the pavement” to discuss the issue.

Related article :Parliament mix-up? PM challenges Moonilal to meet him on the pavement

Lee says that in Rowley response, he exposed his “sensitive political underbelly as he incorrectly thought Dr. Moonilal had referred to funding for ‘political elites’“.

“What message was Dr. Rowley sending to our students and youth? That violent confrontation in the streets is the way to resolve your issues? Dr. Rowley has, in the past, behaved violently in the Parliament. He assaulted another MP by launching a teacup at him. His violent, inflammatory and provocative rhetoric and behaviour glamourise violence. It sends the wrong message to young people who will think this is a satisfactory way to resolve issues.”

Lee also alleged that other PNM party members had been verbally abusive towards members of the Opposition.  Opposition MP Rudranath Indarsingh has reported that he was verbally abused by Arima MP Anthony Garcia in the tea room, a claim which Garcia has since denied.

The Opposition Chief Whip renewed the call for the Prime Minister to answer Moonilal’s original question as to why the government is using public, rather than party funds to assist Cuffie.

Lee says the UNC is hosts fundraisers to assist those in need via cake sales, barbecues and raffles because it gets no support from the Government.