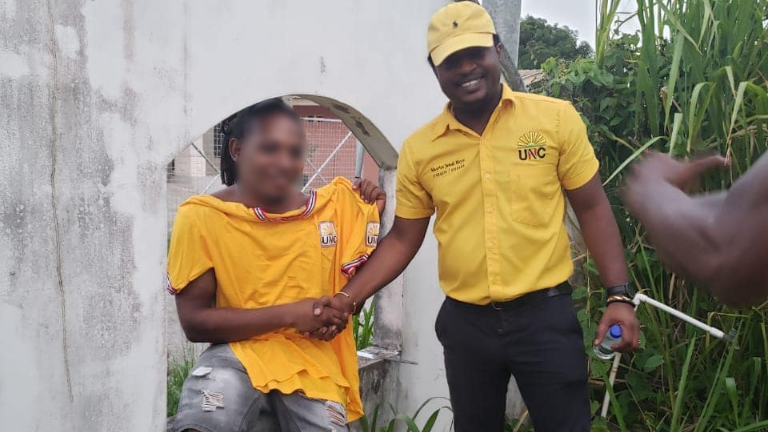 Photo: A supporter holds up a UNC tshirt and poses for a photo with the UNC's D'Abadie/O'Meara candidate Maurice Hoyte during a walkabout in Boys Lane and Extension, D'Abadie on July 15, 2020. Photo via Facebook, UNC- United National Congress.

The United National Congress (UNC) has dismissed a video which suggests that the party is paying people $300 to vote for them in the August 10 general election.

The video surfaced just as UNC leader Kamla Persad-Bissessar urged her candidates to run a “clean” campaign in the lead up to the general election and avoid mudslinging.

In response to the video on Thursday afternoon, the party said it was no doubt created in an attempt to add credence to Prime Minister Dr Keith Rowley “bogus claims” that the UNC has been engaging in buying votes.

“The UNC condemns this blatant attempt by the PNM and their operatives to accuse the UNC of this shameful act. We also call on the PNM to condemn this as we should be focusing on the real issues affecting the people of Trinidad and Tobago.”

It urged its candidates to uphold the guidelines set out Persad-Bissessar and engage in a “safe, ethical, respectful, and honourable” campaign.

“In the heat of this campaign, we especially urge our young candidates and young voters to not taint yourselves or follow the masses. You can set a new standard that will be a model for all to follow.”

The UNC urged the population to ask “real questions” of its candidates, on job creation, crime control and development of youth.