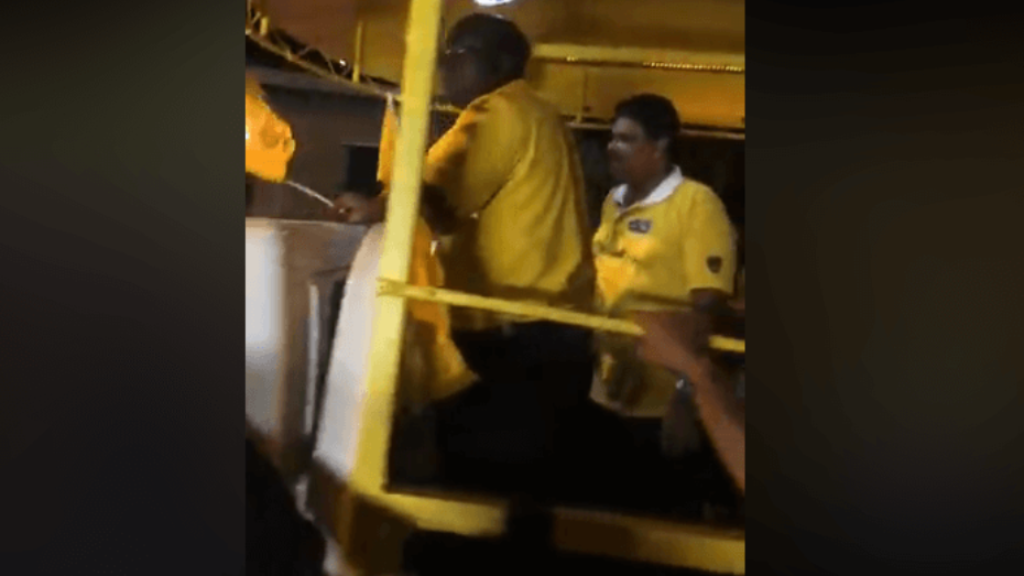 The UNC staged a motorcade that passed by the PNM’s meeting at the Thick Village Community Centre, Siparia, on Thursday night.

The United National Congress (UNC) was warned against using a particular route in the same proximity of a planned meeting by the People’s National Movement (PNM) in Siparia on Thursday night.

The UNC staged a motorcade that passed by the PNM’s meeting which was held at the Thick Village Community Centre.

The Siparia constituency is a UNC stronghold.

Police officers reportedly stopped the motorcade and asked political leader Kamla Persad-Bissessar to turn down loudspeakers, so as not to disrupt the party’s meeting. She claimed she was unaware of the PNM meeting there, and said she had no intention to cause any disturbance.

Supporters were also removed from the roadway as police officers on site sought to maintain order.

In a statement on Friday reiterating his call for political parties to submit schedules of their meetings and events to him directly, Police Commissioner Gary Griffith said this would avoid any future occurrence of what took place last night.

“This request was made to ensure all persons, parties and supporters, are afforded the right to participate without interference. Unfortunately, a minor disturbance in the Siparia district last evening has raised the need to remind all relevant parties of these requests.”

He added that the major political parties have complied with this request, bar one.

The Police Commissioner confirmed that the UNC was advised to use a different route to avoid any potential clashes or disturbances, but chose not to follow this advice.

“The political party that staged the motorcade, was previously advised by the TTPS against utilising the route in the same proximity where another political party was having a planned meeting.

This political party unfortunately ignored this advice, and even though it may not have been the intention, this could have quickly escalated into an unwarranted and unwanted scenario.”

Griffith again urged the political parties to provide their schedules to the police, as he said this would ensure that supporters, or those desirous of attending such meetings and events, would be able to attend in a safe environment.

He stressed that the parties’ leadership cannot control or prevent clashes between supporters if they come face to face, but the police are equipped to handle such incidences.

He said once he is in receipt of this information the necessary police presence can be provided, at no cost to ensure incident-free meetings, walkabouts, and motorcades in the lead-up to the December 2 local government elections.

The top cop noted that while it is a new manner of planning for the hosting of political meetings, this measure will ensure that supporters can participate in this campaign in a safe manner.

He also reminded the political parties of the laws relating to election campaigning.

· Section 72(1) of the Representation of the People Act Chap. 2:01 states “anyone who acts, or incites others to act, in a disorderly manner for the purpose of preventing the transaction of the business for which the meeting was called is guilty of a corrupt practice.”