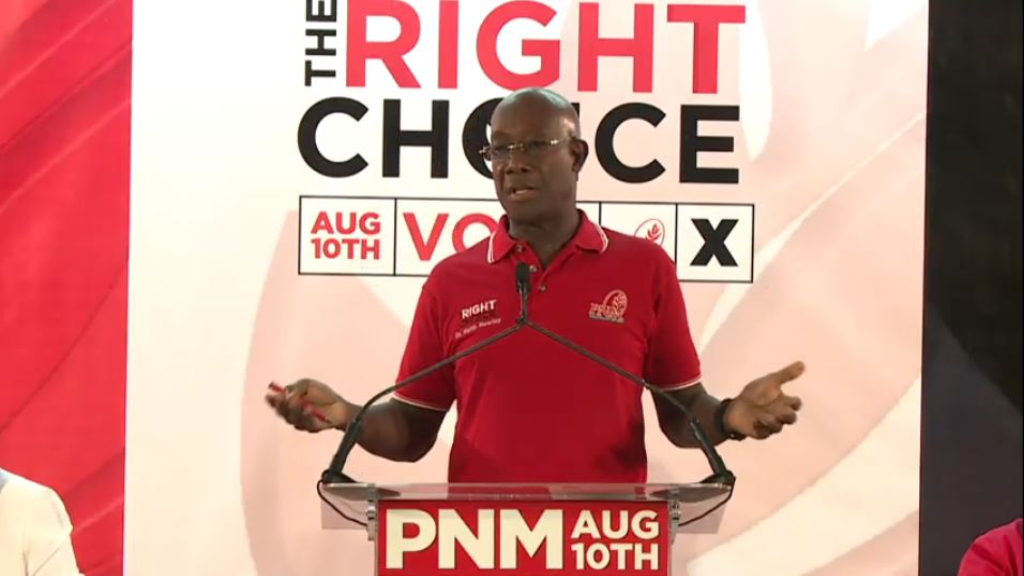 The United National Congress (UNC) has been accused of undermining the country’s electoral process in  the lead up to the August 10 general election.

Prime Minister Dr Keith Rowley put the country on notice of the UNC’s alleged perversion of T&T’s electoral process as he spoke on a political platform in Tunapuna on Wednesday night.

He accused the Opposition party of having little regard for the country’s established institutions and attacking the Elections and Boundaries Commission (EBC).

Further, the Prime Minister said the party has set the stage for an attack on the EBC once the dust settles on the general election.

“I’m putting you on notice tonight that come Tuesday (August 11) morning, the UNC will be attacking the Elections and Boundaries Commission.”

He said the party’s continued assault on the EBC began with the appointment of the Commission’s CEO, Fern Narcis-Scope, when the party claimed she was a relative of former Communications Minister, Maxie Cuffie.

Dr Rowley criticised the party noting that it recently raised the issue despite there being no connection between Narcis-Scope and Cuffie.

“Even after it turned out that that was a lie and it was not so, they still wouldn’t give it up because they need that story.

Last week again I saw it again being raised by the Opposition, that the EBC is headed by a Minister’s niece.”

Commenting on the inability of CARICOM and Commonwealth to send election observer missions Dr Rowley said these bodies had no concern about the conduct of free and fair elections in this country.

He restated that the Government could not provide the funding for these observers to come to T&T and undergo mandatory state quarantine for 14 days as this would have undermined the integrity of their work.

Government sought to get other territories on board but they too had financial constraints and could not offer any assistance.

The Prime Minister said the inability of the observer missions to come T&T will not impact the election in any way.

“The bottom line is – we are going to have our elections without observers as we have done before.”

He said Ambassadors to Commonwealth nations are present in T&T and will see firsthand “the UNC trying to bribe the whole country to try and get votes”.

The Prime Minister recounted the alleged “shameless” distribution of appliances to electors in exchange for votes, a matter he raised on a political platform in La Brea on Tuesday night.

“You think they are bothered? Is now they offloading tv, fridge and stove in this country. Naked, open in big, broad daylight, trying to bribe the electorate.”

Dr Rowley contended that the party called for election observers but had no regard for citizens looking on at alleged misconduct in the UNC’s election campaign.

The UNC has not made any statement on these allegations.

Former minister Devant Maharaj has written to the EBC calling for an investigation into these accusations.