Uncertainty in shelters after Indonesia quake as deaths rise 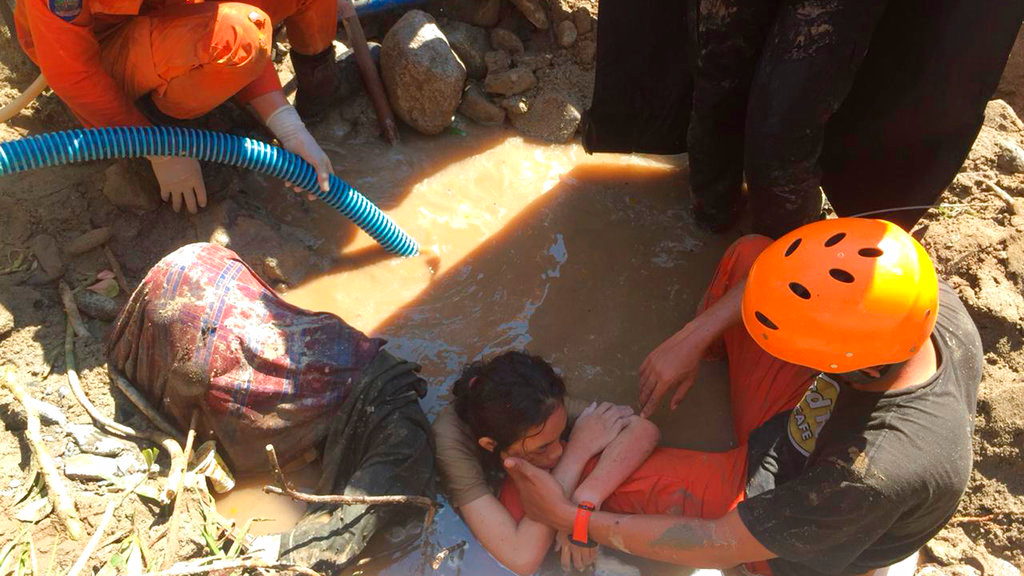 People living in tents and shelters have little but uncertainty since the powerful earthquake and tsunami hit an Indonesian island, where deaths exceed 1,400 and efforts to retrieve scores more victims buried deep in mud and rubble were still hampered Thursday by the lack of heavy equipment.

Thousands more people were injured in the disasters in central Sulawesi last Friday and more than 70,000 were displaced from homes that were destroyed or damaged and lack power and water. They are unsure when they'll be able to rebuild and have been spending hours each day, often futilely, trying to secure necessities such as fuel for generators.

Most of the 1,424 confirmed dead have been buried, and national disaster agency spokesman Supoto Purwo Nugroho said at a news conference in Jakarta that the search effort is being intensified, including at a collapsed hotel in the city of Palu where a South Korean is believed trapped.
The number of dead is expected to rise further as rescue crew comb through affected areas after being slowed initially by broken, impassable roads and other damage.

Nugroho said the search efforts were tough in areas where swathes of land collapsed when the quake caused a phenomenon called liquefaction, where loose, wet soil loses its strength and sinks in a quicksand-like effect. Survivors have described homes and relatives being lost in the mud where liquefaction occurred.

In one area, 202 hectares (499 acres) of land were swallowed whole by the ground while another 180 hectares (445 acres) of land in another village sank, burying 168 houses in mud 3-meter (10 feet) deep, he said. Two dozen diggers and heavy machineries are working to dig victims out and more help are on the way, he said.

Palu resident Bambang said many victims could have survived if help arrived faster. He told local television that he found a friend injured and trapped under debris while searching for his pregnant wife but was unable to help him. The friend died after leaving a message to have him buried in front of the church, he said.

"He was still alive then, but he died because the evacuation was so slow," said Bambang, who uses one name.

National police spokesman Brig. Gen. Dedi Prasetyo said security will be ramped up in the disaster areas to ensure law and order after 92 people were arrested for looting goods such as motor oil, tires and farming equipment. Authorities earlier allowed desperate villagers to grab food supplies from shops but have warned them not to take other things. He noted that security would be necessary for economic activity to resume.

At one of the relief camps, Andi Rusding huddled with numerous family members under a tarpaulin, saying they'd gotten some aid but felt shortchanged.

"Please tell the government and the NGOs if they're really willing to help us with some foods please do not give it away through the command posts," he said. "It is better to go directly to each and every tent. Because sometime (the relief goods) didn't distribute evenly."
Masrita Arifin said she couldn't even describe her living conditions in the camp, just a few hundred meters from her family's heavily damaged home.

"It's really difficult to find water and we don't have a place to shower, but thank God we got some aid from the government, including a medical checkup."

Nugroho said thousands of people have been evacuated by ships and that the agency's focus is on intensifying rescue efforts, medical treatment and aid distribution as well as restoring infrastructure and coordinating international help.
Countries including Singapore, South Korea, Britain, Japan, India and Malaysia have pledged to send 11 military transport aircraft, he said. Australia sent a planeload of supply kits Thursday as part of its aid package announced earlier.

Palu's damaged airport is expected to re-open for civilian traffic later Thursday, military official Lt. Col. Agus Hariyanto said. He said 100 Indonesian marines have landed at Palu airport and 200 more were on their way to help in rescue work.

The national disaster agency has called for improvements to cope with future events. With Indonesia sitting on the seismically active Pacific "Ring of Fire," it said 176 tsunamis have been recorded since 1629.

Officials estimated some 148.4 million Indonesians are at risk in earthquake-prone areas while 3.8 million people could be in danger due to tsunamis, it said, adding that there is only a 30-40 minute window to warn villagers to flee a tsunami.