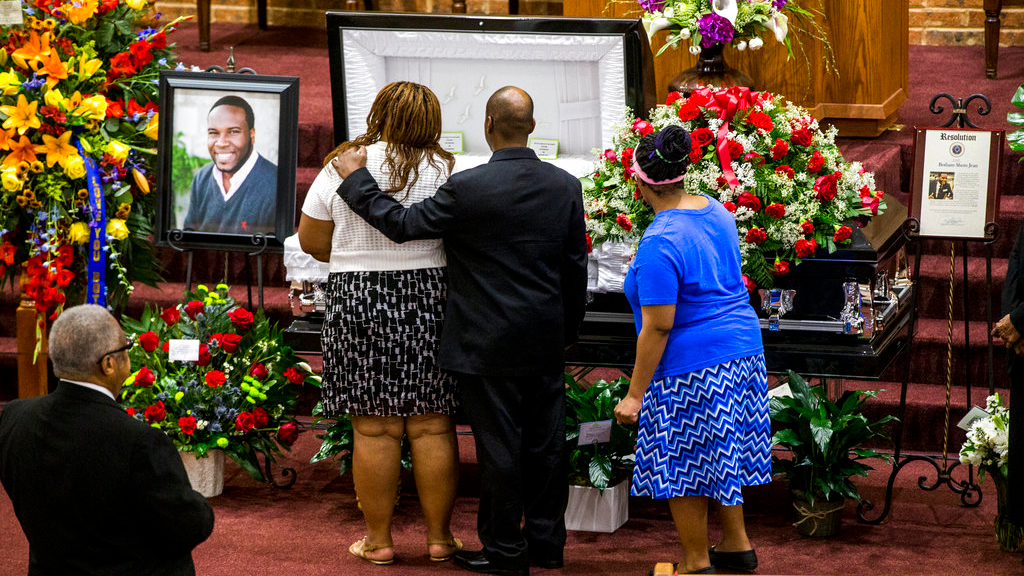 Mourners console each other during the public viewing before the funeral of Botham Shem Jean at the Greenville Avenue Church of Christ on Thursday, September 13, 2018 in Richardson, Texas. He was shot and killed by a Dallas police officer in his apartment last week in Dallas. (Shaban Athuman/The Dallas Morning News via AP)

Friends and family on Thursday remembered a man gunned down by a Dallas police officer as a deeply religious 26-year-old accountant who loved to sing and had confided to his uncle that he might one day want to be prime minister of his native Caribbean island country of St. Lucia.

Those speaking at the service for Botham Jean at a suburban Dallas church mostly focused on the qualities of the caring man who always had time to help others. Some also spoke about the shocking way Jean, who was black, died — fatally shot on September 6 by the white officer who said she mistook his apartment for her own.

"Our prince royal was snatched from us by the quick-to-trigger finger of one trained to protect and serve. Perhaps the good that might overcome this violent, heinous act will be that those who are trained to serve and protect will serve love and peace and not violence and bullets," Jean's uncle, Ignatius Jean, said to applause.

Dallas Mayor Mike Rawlings and Dallas Police Chief U. Renee Hall were among those who attended the hymn-filled funeral. Jean, who grew up on St. Lucia, attended college at Harding University in Searcy, Arkansas, so he could remain within a religious community while getting his education.

At Harding, he majored in accounting and information systems and graduated in 2016. He then went to work at the accounting and consulting firm PwC in Dallas.

"Botham aimed high in his pursuit of excellence in everything," said Tommy Bush, who served as a mentor to him while he was in college.

He said that what was unexpected was the "tremendous blessing and growth" he experienced from knowing Jean. "I was supposed to be mentoring him," he said.

Those gathered at the funeral recalled Jean helping those on St. Lucia, from working with orphans to singing with people who just needed a friend.

"He was always in service of others, even when it wasn't convenient for him," said Alexis Stossel, a friend of Jean.

Stossel called him "the biggest extroverted accountant you'd ever find," adding that she knows he's now in heaven, "bouncing around, singing at the top of his lungs."

Bertrum Jean, Botham Jean's father, thanked "so many who have rallied around us and been there to support us." ''There are so many in the U.S. that have shown tremendous love to this boy," he said.

Jean's slaying sparked protest and outrage and has become a flashpoint in a national debate over shootings of black men by police.

Officer Amber Guyger, 30, was arrested Sunday for manslaughter and has since been released on bond. A Dallas police affidavit released Friday says officers recovered two bullet casings, a police backpack and vest and 10.4 grams of marijuana from Jean's apartment after the shooting. Lee Merritt, Jean's family's attorney, said the affidavit showed police began searching for evidence to discredit Jean immediately after the shooting.

"It's looking specifically for drug paraphernalia," Merritt said of the search. "They immediately began looking to smear him."

After the funeral, area religious leaders expressed their outrage at the killing. Sammie Berry, an elder and pulpit minister at Jean's church, says the family cannot rest until justice is served and Guyger is punished "to the fullest extent of the law." He described Jean's death as a tragedy that could have been avoided and said the group wants to know why Guyger has not been fired.

He says they "cannot let Bo become another statistic."