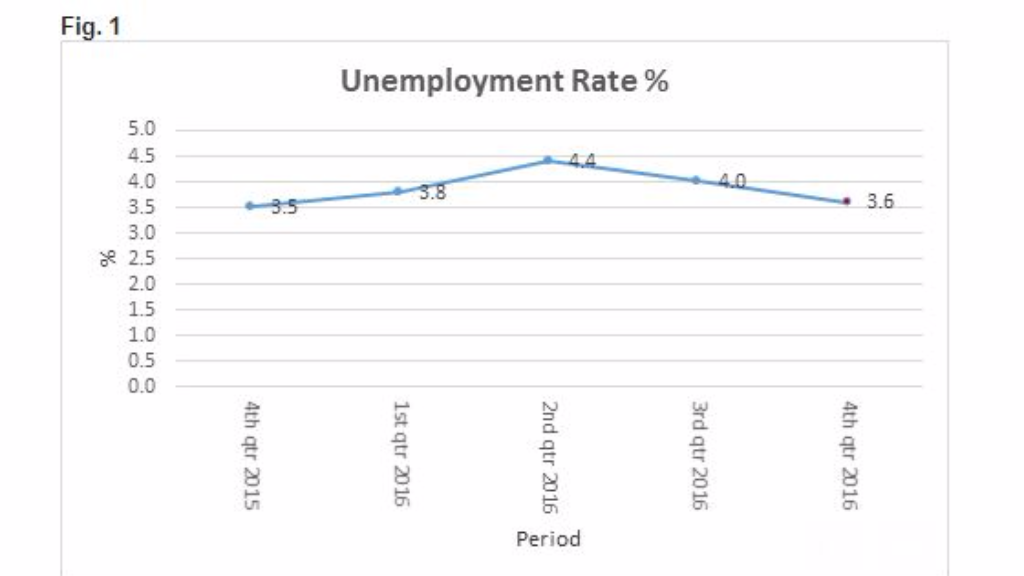 The Central Statistical Office said the decrease is not “uncommon” for this period and added that it was mainly due to “seasonality” changes.

The CSO noted that in the period under review, the labour force was “particularly dynamic” granted that there were significant changes to the characteristics of the labour market.

Self-employed workers experienced the largest job loss in the fourth quarter of 2016 as was observed in ‘Own account worker’ by 11, 300 or 9.7%. However, the CSO said this decrease was offset by the ‘Government public service/statutory board’ by  8,300 or 6.2%.

The CSO said there was an overall fall in the labour force with 631,300 persons at the end of the fourth quarter of 2016 which represented a decrease of 7,900 or 1.2% when compared to the third quarter 2016. The data showed that males decreased by 4900 or 1.3% while females decreased by 3000 or 1.1%. According to the CSO, the overall fall in the labour force exerted downward pressure on the unemployment rate.

In terms of unemployment between the third and fourth quarter of 2016, the data reflected a decrease of 2,600 or 10.2% in the number of persons without jobs. Unemployed males decreased by 800 or 5.4% while unemployed females decreased by 1,800 or 16.8 %. A comparison of the data for the corresponding quarter in 2015 revealed an increase of 600 or 2.7% in the total number of unemployed persons in Trinidad and Tobago.