The unexpected love story behind The Lost Tribe's TAJ 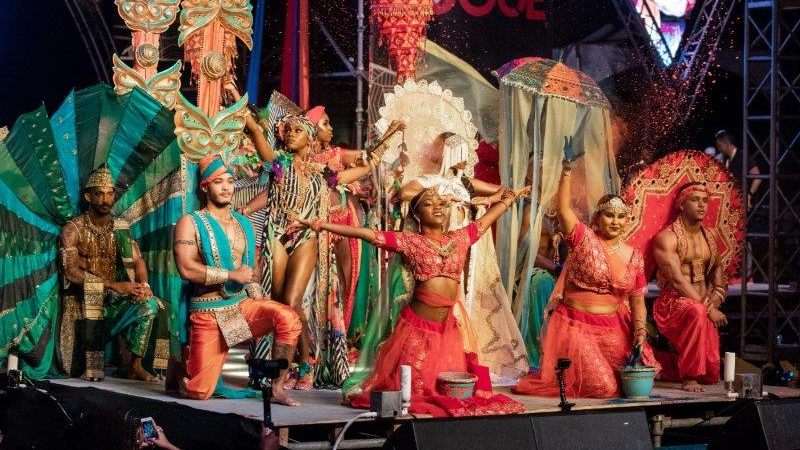 On July 21, the crowd gathered at the Jean Pierre Complex fell silent as the backdrop in front them faded to black, and a backlit silhouette of the Taj Mahal crackled to life on screen.

The Lost Tribe held patrons of the Festival of the Bands enraptured as Indian dancers flanked the stage, stamping feet and spinning to the haunting melody of “Ghoomar”, a song from Bollywood film Padmaavat.

One by one dancers and models portraying the ten sections of The Lost Tribe’s 2019 presentation TAJ took to the stage, posing gracefully to show off the details of their ornate costumes.

Each section is fashioned after a line of poetry on the Taj Mahal, which was Executive Creative Director Valmiki “Val” Maharaj’s inspiration for the band’s fourth year of Carnival.

In October 2017, Maharaj journeyed to India to soak in the details of the building he hoped to fashion the band around.

TAJ represents a well-known story of love and loss and grief, but for Maharaj, the tale woven on the stage on Saturday night bore a strong resemblance to a journey he was taking in his own life.

While in India, Maharaj received a call that cut his trip short – his mother Basdaye – affectionately called “Bas” by all who knew her - had fallen ill and he needed to go home.

Maharaj would spend two weeks at his mother’s side before she passed away.

An only child to a single mother for most of his life, Maharaj had lost his entire universe.

For Maharaj, his 2019 presentation now took on a new significance as he was now fully experiencing the pull of gravity between love and loss and how that could manifest in one’s work.

“I call it my Bas Mahal” he quipped softly, ever one to turn even the saddest of moments into an opportunity to laugh.

He reflected on the fact that his mother’s world and his had always felt disconnected, that she and others like her could scarcely see themselves in the melee of Carnival in the 21st century.

TAJ presented an opportunity to bridge that gap, incorporating the world of the old into this new contemporary translation that The Lost Tribe has developed a reputation for bringing to its masqueraders.

Maharaj, as an artist, is able to find beauty in everything, so it surprised no one that knew him that he was able to draw on even the darkest moment of his life to bring the beauty of this love story to life.

Shortly after Maharaj lost his mom, the Tribe family suffered a blow in February 2018, with the death of Michael “Uncle Mike” Nobrega, the father of Design and Production Director Monique Nobrega.

“He raised me in the industry, teaching me the ins and outs of Carnival.” Maharaj reflected on his relationship with the elder Nobrega.

Maharaj has dedicated The Lost Tribe’s 2019 presentation to his mother, and to “Uncle Mike”.