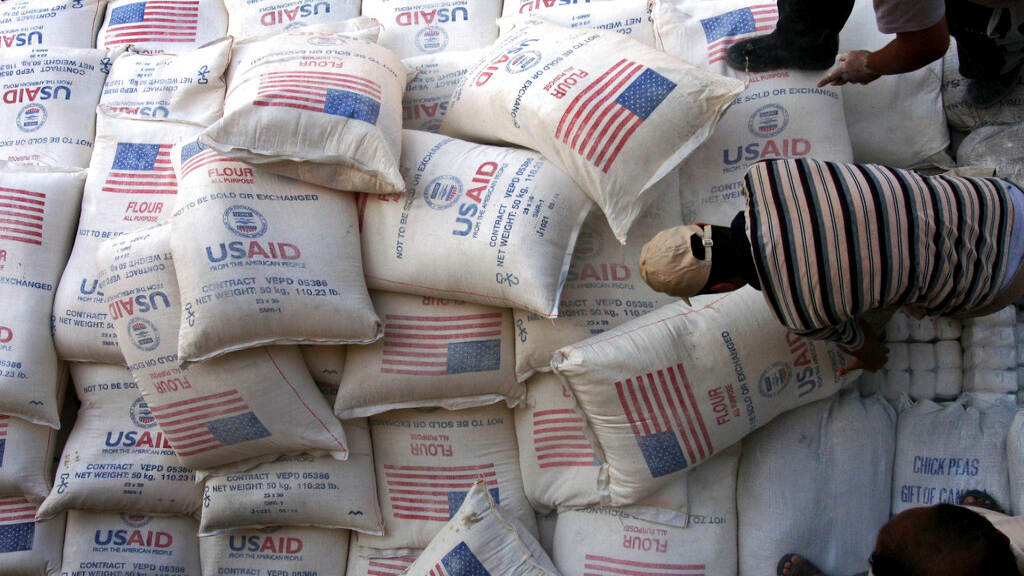 FILE - In this June 4, 2008 file photo, Palestinians unload bags of flour donated by the United States Agency for International Development, USAID, at a depot in the West Bank village of Anin near Jenin. (AP Photo/Mohammed Ballas, File)

Tens of thousands of Palestinians are no longer getting food aid or basic health services from America, U.S.-funded infrastructure projects have been halted, and an innovative peace-building program in Jerusalem is scaling back its activities.

The Trump administration's decision last year to cut more than $200 million in development aid to the Palestinians is forcing NGOs to slash programs and lay off staff as the effects ripple through a community that has spent more than two decades promoting peace in the Middle East.

The U.S. government's development agency, USAID, has provided more than $5.5 billion to the Palestinians since 1994 for infrastructure, health, education, governance, and humanitarian aid programs, all intended to underpin the eventual creation of an independent state.

Much of that aid is channeled through international NGOs, which were abruptly informed of the cuts last summer and have been scrambling to keep their programs alive.

President Donald Trump says the USAID cuts are aimed at pressuring the Palestinians to return to peace talks, but Palestinian officials say the move has further poisoned relations after the U.S. recognised Jerusalem as Israel's capital last year. The aid groups, many of which have little or no connection to the Palestinian Authority, say the cuts hurt the most vulnerable Palestinians and those most committed to peace with Israel.

Before the aid cuts were announced, it provided food aid — branded as a gift from the American people — to more than 180,000 Palestinians in the Israeli-occupied West Bank and Gaza on behalf of the World Food Program. USAID had planned to contribute $19 million a year for the next five years to continue the project but pulled out in August.

Global Communities can now only provide aid to 90,000 people through March, and Abu Hijleh had to lay off around 30 staff, including in Gaza, where unemployment exceeds 50 percent.

"It really hurts, because you're talking about the most basic level of assistance," she said. The average family receives a monthly voucher worth around $130.

She says her sons each bring in less than $5 a day from odd jobs. "They cannot afford to buy food for their families, so I help them out," she said.

Since the aid was cut off, she's been able to qualify for welfare payments from the Palestinian Authority, which itself relies heavily on foreign aid. "Without it we would go hungry," she said.

Funding has also been cut for a five-year, $50 million program run by a coalition of NGOs to provide health services, including clinical breast cancer treatment for some 16,000 women and treatment for some 700 children suffering from chronic diseases.

Infrastructure projects, including desperately needed water treatment facilities in the blockaded Gaza Strip, have also been put on hold.

Anera, which has carried out development projects in the Middle East for more than 50 years, said it was forced to halt five infrastructure projects in the West Bank and Gaza before completion and cancel three more in Gaza that were pending funding approval. It says the projects would have benefited more than 100,000 people.

The NGOs are reaching out to other donors, but USAID is one of the biggest sources of funding for a global aid community overwhelmed by conflicts in Syria, Yemen and elsewhere.

Kids4Peace, a group founded by Israeli and Palestinian families in Jerusalem in 2002, brings Jewish, Christian and Muslim teenagers together for seminars and summer camps where they can share their experiences and learn more about one another.

The group's organisers acknowledge the longstanding criticism of such initiatives — that campfires and singalongs won't bring peace to the Middle East, especially after a decade of diplomatic paralysis and little hope for resuming meaningful negotiations.

But they say that with a $1.5 million USAID grant in 2016 they tripled the number of annual participants to around 70 and revamped programs. USAID takes a hands-on approach, requiring regular audits and demanding concrete accomplishments.

Participants now take part in a Youth Action Program in which they plan and execute projects in their communities. One group is campaigning for Arabic subtitles in Jerusalem cinemas. Another set up a community garden in a tense neighborhood where Jews and Arabs had rarely interacted.

Kids4Peace was a finalist for another $1.5 million grant this year, but that has been indefinitely postponed because of the funding cuts. It will continue to run programs with the help of private donors, but its growth prospects are in doubt.

"We see the trend lines moving in a negative direction, in terms of more hostile attitudes toward the other, less interaction between Israelis and Palestinians, more resistance to peace negotiations," said the Rev. Josh Thomas, executive director of Kids4Peace International. "We see that as a need for greater investment rather than less."

Trump also halted aid to the U.N. agency for Palestinian refugees, which provides basic services to more than 5 million Palestinians across the Middle East, but UNRWA was able to narrow the funding gap with aid pledges from other countries.

"We don't want their money, we don't want anything to do with America," said Nabil Shaath, an adviser to Palestinian President Mahmoud Abbas. "If (Trump) thinks he can put pressure on us through his money, it won't work."

Critics of the policy fear that cutting off aid will further diminish Washington's ability to manage a conflict that remains highly combustible.

"When America vacates the Middle East space, we do so at our own risk and we do it to the benefit of our adversaries," said Dave Harden, a former USAID mission director in the West Bank and Gaza.