US author, refugee hopes to inspire kids with book 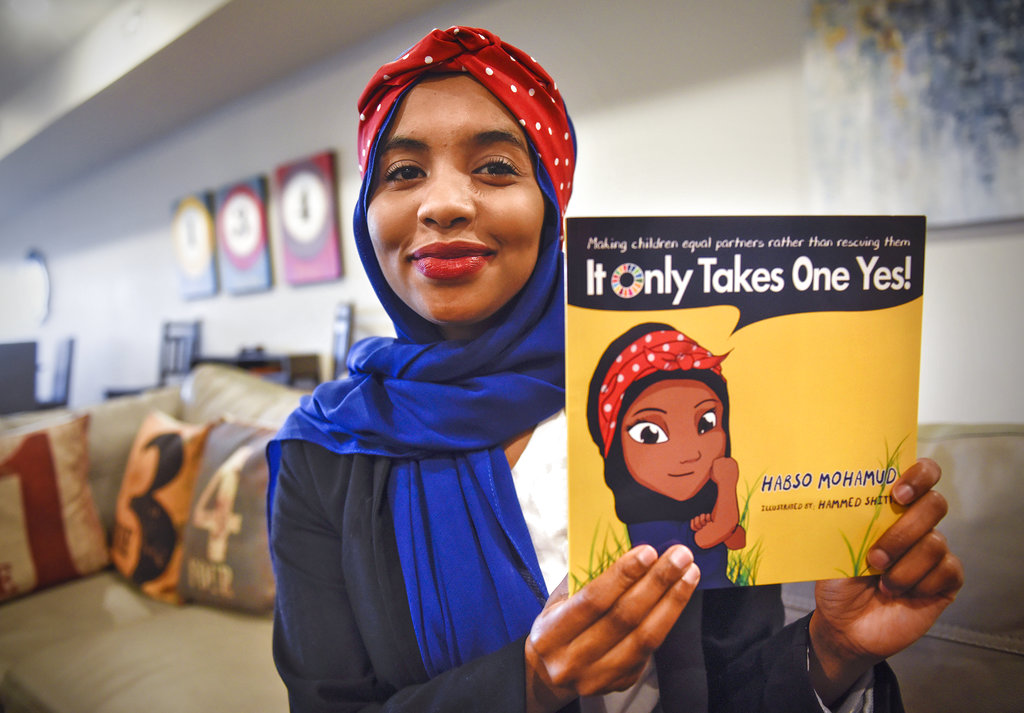 In this Friday, Nov. 2, 2018, photo, Habso Mohamud holds a copy of her book during an interview in St. Cloud, Minn. (Dave Schwarz/St. Cloud Times via AP)

Habso Mohamud was born in a refugee camp in Kenya.

While living in the camp, Mohamud travelled with her grandmother to traditional villages and places where nomads lived. Her grandmother wanted her and her siblings to see "the other side of the world."

Because to Mohamud's grandmother, they were lucky — they had shelter and knew where their next meal would come from.

"My grandmother would take us and show us you could have it worse. Be appreciative — at a very young age that's what I learned," Mohamud told the St. Cloud Times.

Mohamud lived in the refugee camp until she was 10. Now 24, Mohamud lives in St. Cloud. She attended St. Cloud schools and earned her bachelor's and master's degrees at St. Cloud State University. She also works for the UNESCO Center of Peace and recently published a children's book.

In her book, "It Only Takes One Yes," Mohamud hopes to inspire children — especially young girls — to see themselves as being able to make a difference in the world.

"I want to make sure kids have a voice," she said. "But I want to do it in my community because this community needs me."

Despite working for the United Nations, Mohamud chooses to live in St. Cloud.

"And this is the country where you can be anything you want to be in this world."

Mohamud's parents lived in Somalia before fleeing the country for Kenyan refugee camps during the civil war in Somalia. Her mother never finished high school but her father went to college and was a medic in the military.

Mohamud received an education in the camp but said it was very basic and without a set curriculum because the population changed so frequently.

Her family came to the United States in 2005 and was placed in Fargo. They moved to St. Cloud, where Mohamud attended Talahi Community School, South Junior High, and spent time at Technical and Apollo high schools.

She then moved to Chicago to live with her sister and graduated from Maine East High School in Park Ridge, Illinois. That's the same high school Hillary Clinton — former first lady, senator and secretary of state — graduated from, Mohamud said proudly.

Mohamud graduated from St. Cloud State University with a bachelor's degree in hospitality and tourism in 2017 and a master's degree in global education and leadership development in 2018.

"I love traveling. I didn't know that was actually a career until I went to St. Cloud State," she said.

When Mohamud entered school in the United States, she spoke Swahili.

She was placed into an English learner program, which she liked. She also loved math and geography. And she is remembered by her principal at South Junior High — Eric Williams, current STRIDE Academy executive director — as a cheery, positive and delightful student.

"She was just a joy. She was the type of student you wish you could clone into a school full of them," Williams said.

But Mohamud dealt with mental health issues from about sixth grade to 11th grade that sometimes kept her from school.

"I was actually going through this health condition," she said. "It was really hard. I was in and out of St. Cloud Hospital's adolescent department."

Mohamud said mental health issues are taboo in her culture. But her mother made sure she received the treatment she needed.

"In the community, kids would make fun of me," she said. "That's when my mom would not take me to the playground and I would just stay inside the house and just read books. That's why I became attached to reading books.

"Even though my mom didn't speak English, she would keep me company and I would read to her," she added.

The silver lining to her isolation? Reading and studying so much she became proficient in English faster than many English learner students do.

"That's how I tested out of my exams," she said. "I'm grateful for every opportunity I had."

She hopes by sharing her story, she can help make mental health issues less taboo.

"I want kids to know that just because you have mental illness, it doesn't mean that your future is over," she said. "But it's the start of something great."

Mohamud has visited area schools — including STRIDE Academy — to read her book and talk to students. Williams said she is welcome back any time.

"What I think is pretty amazing is she is so gracious and she is so true to her roots and wants to give back to her community," Williams said. "To have so much poise and be so confident in her own abilities, it's going to take her to a lot of places and she's going to have a lot of success.

"She's definitely going to make an impact in the world."

Mohamud said Williams inspired her when she was a middle-schooler. Every morning, he would make the same announcement: "This is Mr. Williams. Make it a great day or not. The choice is yours."

"I used to try my very best to have a great day," Mohamud said. "I would come in the morning so upset because I didn't get to go outside yesterday, and then I'd hear that message and (think), I'm going to make it a better day. It's going to be a good day."

Mohamud works for UNESCO Center for Peace as a representative for women and children. Last summer, she helped with Model UN programming and spent time in Europe with the federation's executive board.

The UN's goals — which include quality education, good health and well-being, peace and justice, and partnerships — are important to Mohamud, as well. She included the goals' associated colors into the cover of her book, which she published in September.

The cover also features the book's protagonist, who represents Mohamud, dressed like Rosie the Riveter.

"The Rosies, they inspire me. It's simple — showing how strong women and young girls can be." Mohmaud said. "And I want to make sure they know their existence paved the way for us, showed us the possibilities that we can do."

The book follows a girl who wishes she could be the queen of the jungle, among other wishes.

The mother tells the girl she already is — a dynamic familiar to Mohamud.

The book's title was inspired by a conversation she had with a longtime government official in Washington, D.C.: It only takes one yes to lead to another and another. It also means saying yes to one's dreams.

"It's you saying yes to yourself. That's where it all starts. You've got to believe in yourself," she said. "Whenever I'm signing my books for children, I tell them, 'Be strong, be fearless and be you because there's nobody that could be you but yourself."

Mohamud's rising star status has been noticed by many, and not only locally.

Recently, she was asked if she would consider reading at the White House. She plans to in the next few months.

Her book, Mohamud hopes, will speak for itself.

"That's really what my book is about. That our differences (are) what really brings us together, no matter our religion or culture or ethnicity. We should always keep protecting and respecting one another and respecting each other's values and beliefs," she said.

When asked what she might say to President Donald Trump, who campaigned on establishing a ban on Muslims entering the United States, Mohamud said her religion will guide her.

"This is what my religion teaches me — even if a person harms you, you are supposed to forgive them. And that's what I want to do with our president," she said.

"Even though he's done all these things, I still want to have a dialogue with him. I want to make sure he sees it from a Muslim lens rather than what he hears from the outside world."

US students called heroes for rousing residents from burning home