US couple hospitalised after taking anti-malaria additive for COVID-19 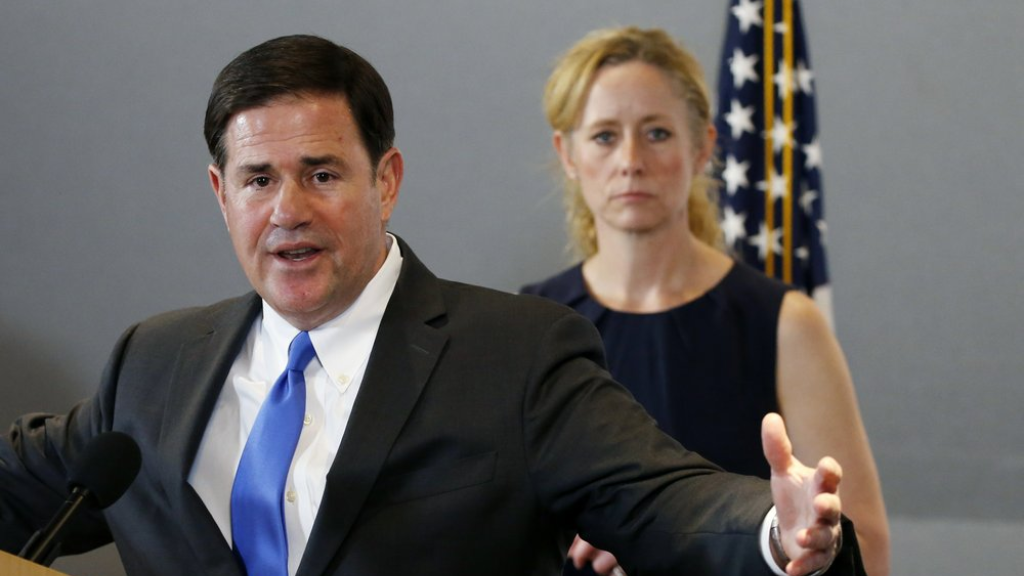 Arizona Gov. Doug Ducey, left, answers a question as he is joined by Arizona Department of Health Services Director Dr. Cara Christ, right, as they provide an update on the coronavirus outbreak during a news conference at the Arizona State Public Health Laboratory Monday, March 23, 2020, in Phoenix. (AP Photo/Ross D. Franklin)

A Phoenix-area man has died and his wife was in critical condition after the couple took chloroquine phosphate, an additive used to clean fish tanks which is also found in an anti-malaria medication that's been touted by President Donald Trump as a treatment for COVID-19.

Banner Health said Monday that the couple in their 60s got sick within half an hour of ingesting the additive. The man couldn't be resuscitated when he arrived at a hospital, but the woman was able to throw up much of the chemical, Banner said.

"Trump kept saying it was basically pretty much a cure," the woman told NBC.

It's unclear if the couple took it specifically because of COVID-19, the disease caused by the coronavirus, but now Banner Health is warning everyone to avoid self-medicating.

"Given the uncertainty around COVID-19, we understand that people are trying to find new ways to prevent or treat this virus, but self-medicating is not the way to do so," said Dr Daniel Brooks, Banner Poison and Drug Information Center medical director. "The last thing that we want right now is to inundate our emergency departments with patients who believe they found a vague and risky solution that could potentially jeopardize their health."

At a news conference last week, Trump falsely stated that the Food and Drug Administration had just approved the use of an anti-malaria medication called chloroquine to treat patients infected with the coronavirus.

Even after the FDA chief clarified that the drug still needs to be tested for that use, Trump overstated the drug's potential upside in containing the virus.

Chloroquine is obtained by prescription, and Banner Health is now urging medical providers against prescribing it to people who aren't hospitalized.

The difference between the fish tank cleaning additive that the couple took and the drug used to treat malaria is the way they are formulated.

The man's death came as the number of COVID-19 cases in Arizona spiked more than 50% in one day, from 152 on Sunday to 235 on Monday, according to the state Health Department.

Pima County reported its first coronavirus death: A woman in her 50s with an underlying health condition.

It marked the third COVID-19 death in Arizona. Two men, one in his 70s and one in his 50s, died previously from the disease. Both had underlying conditions.

Governor Doug Ducey said he's working on an "economic protection plan" to help people struggling with the loss of income, but he did not outline details. He said it will be released soon.

Ducey also answered questions about the role of the National Guard in Arizona, which the governor called upon last week. Ducey said the Guard is now involved only in shoring up the supply chain for grocery stores and food banks, but "they're going to be flexible."

He said he'd deploy the Guard as needed but sidestepped a question about whether the soldiers would be involved in law enforcement.

About 100 National Guard soldiers received briefings Monday from medical, legal, public affairs and other staff, Major Aaron Thacker said. All were given a basic medical screening to check for a fever, he said.

"They're preparing for the mission," Thacker said. "I'm anticipating in the next couple of days you're going to see a large volume of guardsmen crossing across the state in order to support the needs of the food banks."

The Guard expects to mobilize more than 700 people this week, but it wasn't clear exactly when they would hit the streets, and many more could be expected.

Ducey anticipates the response to the virus will include up to 5,500 Arizona National Guard personnel, he wrote Friday in a letter to US Defense Secretary Mark Esper requesting federal money and additional authority.

That would represent the majority of the Guard's 7,600 members. Ducey said the state needs immediate help in several areas including planning, consulting, logistics and supplies, testing and personnel movement.

People have tested positive in 11 of Arizona's 15 counties, including 139 cases in Maricopa County, the state's most populous.

For most people, the virus causes only mild or moderate symptoms, such as fever and cough. For some, older adults and people with health problems, it can cause more severe illness, including pneumonia.

The vast majority of people recover from the virus.

She said possibilities include building three field hospitals and re-opening shuttered medical centers and using a former basketball arena to house patients leaving the hospital but not yet well enough to go home.

Ducey issued an executive order outlining "essential services" that can continue to operate if the state or any local government issues an order for people to stay home.

Ducey said he's preparing for the future but there's no need currently for a stay-at-home order like those issued in several US cities and states, including California and New York.

"Arizona is not there yet," Ducey said. "We're not at the same stage as other states."