US Gulf Coast braces for impact as Alberto approaches 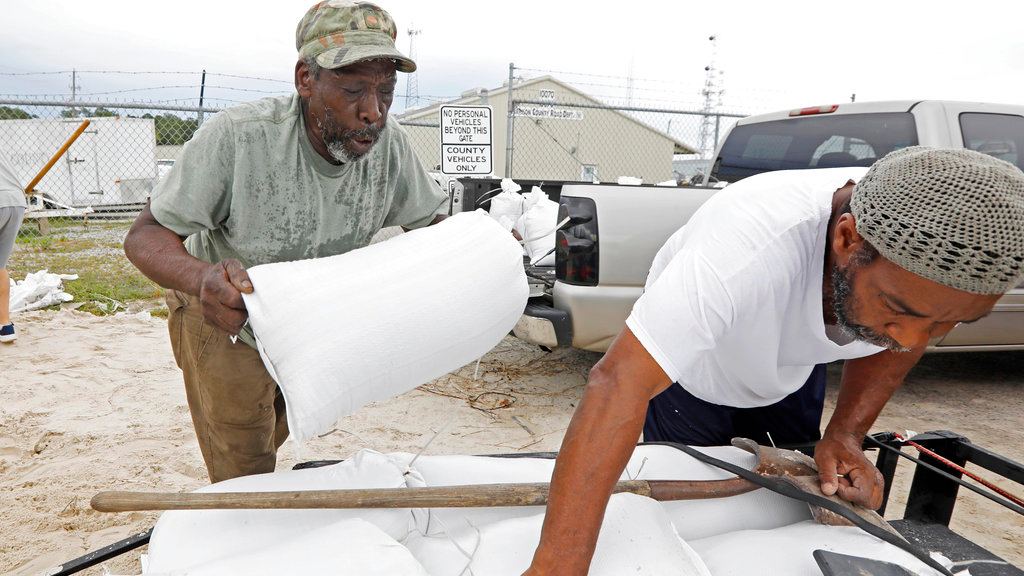 Tommy Whitlock, left, places a filled sand bag onto his trailer at a Harrison County Road Department sand bag location, as his friend Joseph Buckner adjusts the load while preparing for Subtropical Storm Alberto to make its way through the Gulf of Mexico in Gulfport, Miss., Saturday, May 26, 2018. (AP Photo/Rogelio V. Solis)

Subtropical Storm Alberto - the first named storm of the 2018 hurricane season - prompted Florida, Alabama and Mississippi to launch emergency preparations Saturday. Rough conditions were expected to roil the seas off the eastern and northern Gulf Coast region through Tuesday.

"These swells are likely to cause life-threatening surf and rip current conditions," the National Hurricane Center in Miami said in a statement.

Gusty showers were to begin lashing parts of Florida on Sunday, and authorities were warning of the possibility of flash flooding.

The National Weather Service said Sunday that tropical storm warnings cover the entire Florida Gulf Coast and inland portions of the Florida Panhandle as well as parts of coastal Alabama.

Isolated tornadoes were possible across the region on Sunday and Monday.

About 5 to 10 inches (13 to 25 centimeters) of rain are possible along affected areas in eastern Louisiana, Mississippi, Alabama, western Tennessee and the western Florida Panhandle. Isolated areas could see as much as 15 inches (38 centimeters).

Under overcast skies and occasional drizzle, several Gulfport, Mississippi, residents lined up to fill 10- and 20-pound (5- and 9-kilogram) bags with sand they will use to block any encroaching floodwater expected as a result of Alberto.

Tommy Whitlock said sandbagging has become a usual event in his life since he lives next to a creek.

"I'm doing this because every time we have a hard rain, it floods at my house," Whitlock said. "We get water from other neighborhoods, and water can get up to a foot deep in some places."

Eddy Warner, a retired consultant for a construction company, filled bags while waiting for his nephew to come help transport them home to protect his garage.

Alberto — the first named storm of the 2018 hurricane season that officially starts June 1 — is expected to strengthen until it reaches the northern Gulf Coast, likely on Monday night.

The NWS said waves as high as 18 feet (5.5 meters) could pound the popular Gulf beaches in Baldwin County, Alabama, and northwestern Florida on Monday. A high surf warning was in effect through 7 p.m. Tuesday local time.

At 8 a.m. EDT Sunday, the National Hurricane Center in Miami said Alberto was about 165 miles (265 kilometers) southwest of Tampa, Florida, and moving north at 15 mph (24 kph). The storm had top sustained winds of 45 mph (75 kph).

The downpours could dampen Memorial Day, the unofficial start of the summer tourist season along Gulf beaches. Along with heavy rains and high winds come rough seas and a threat of rip currents from Florida to Louisiana that can sweep swimmers out to sea.

Tracey Gasper and her 6-year-old son, Chase, traveled to Biloxi Beach from Donaldsonville, Louisiana, for a day of fun in the sun with a group of friends from Baton Rouge, Louisiana. The weather had scared off the usual crowds expected for the holiday weekend.

"It was a 50-50 chance of whether to come down and we decided to chance it," Gasper said.