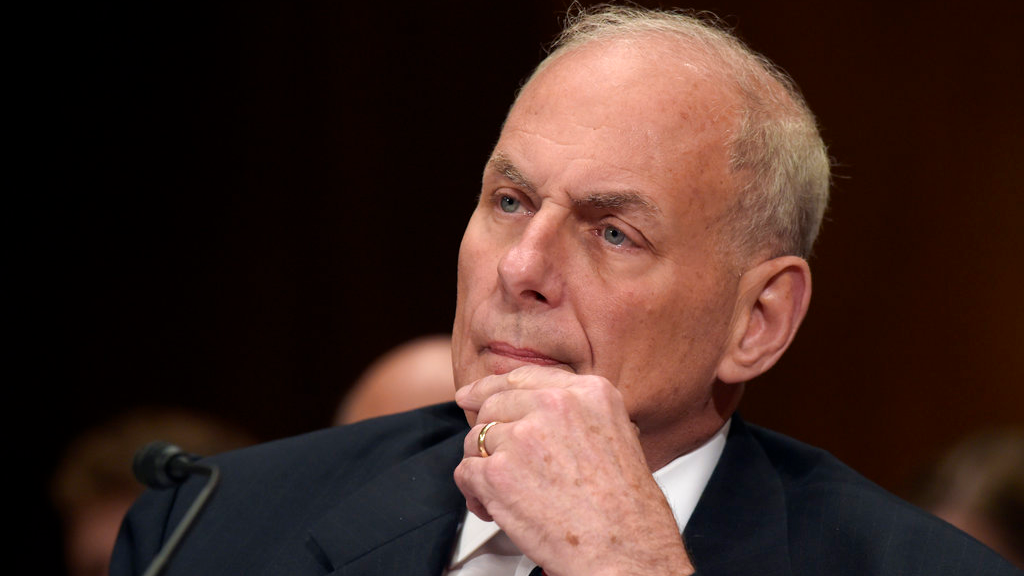 The U.S. homeland security chief made a brief visit to Haiti on Wednesday less than two weeks after the Trump administration suggested that 58,000 Haitians in the U.S. should get ready to return home.

Homeland Security Secretary John Kelly met privately with President Jovenel Moise and other officials on the grounds that used to house Haiti's domed National Palace before it pancaked in a devastating 2010 earthquake.

After an approximately 90-minute meeting, Kelly said he told Moise that the two countries could "work together as we move forward on any future extensions" for Haitians facing repatriation from the U.S.

But he stressed that the United States' humanitarian program for Haitians was never meant to be permanent. "The operative word in the law is 'temporary.' It's not meant to be an open-ended law, but a temporary law," he said.

Washington recently extended until January the temporary humanitarian program that has allowed tens of thousands of Haitians to live and work in the U.S. without fear of deportation since the 2010 quake.

US officials say conditions in Haiti have significantly improved since the disaster. But advocates for Haitians say conditions have not improved nearly enough for Haitians to be deported, and the Caribbean country's government has been seeking another 18-month extension for its nationals in the "temporary protected status" program.

A final decision is expected later this year, but a recent statement from the Homeland Security Department suggested Haitian immigrants should start getting their affairs in order, including acquiring travel documents.

Robert Maguire, a Haiti expert who is an international affairs professor at George Washington University, said he believed that Moise had very little space to maneuver on the protected status issue, especially as post-earthquake funding from a variety of sources has diminished.

"If Moise pushes back on the deportation of Haitians, he may not be considered a friend of the U.S. and therefore put development assistance in jeopardy," Maguire said.

But Maguire added that failing to be seen publicly pushing back on mass deportations — a sensitive topic in Haiti — "is bound to make his already weak young presidency appear even weaker."

A number of humanitarian and development groups working in Haiti called this week for Kelly to see Haiti's vulnerability firsthand, including the vast unregulated sprawl just outside Port-au-Prince where at least 250,000 people have settled since the quake devastated much of Port-au-Prince and surrounding areas.

Kelly rejected criticism that his quick stop in Haiti involved only meetings at the National Palace. He said that over the years, he has made about 15 tours of various sites in Haiti, including camps filled with people left homeless by the quake.

People who say he could not get an accurate assessment of Haiti's conditions "don't really know what they're talking about," Kelly said.

A group of US lawmakers who oppose deportations of the Haitians had called for Kelly to join them on a future tour of the struggling southwest region slammed by last year's Hurricane Matthew and hit hard by flooding from torrential spring rains.

"I sincerely doubt that such a cursory trip will provide Secretary Kelly with enough substantive knowledge to truly understand the conditions on the ground and properly inform his decision on whether to extend Temporary Protected Status in six months," said Rep. Yvette Clarke, a Democrat from New York.

While Haiti has made advances spurred by international aid since the quake, it remains one of the poorest and most unequal countries in the world.

There's growing worry that if nearly 60,000 Haitians are deported, the loss of remittances from the U.S. that sustain vulnerable families will cause suffering.

Sandro gunning for Madrid to give Barcelona LaLiga glory