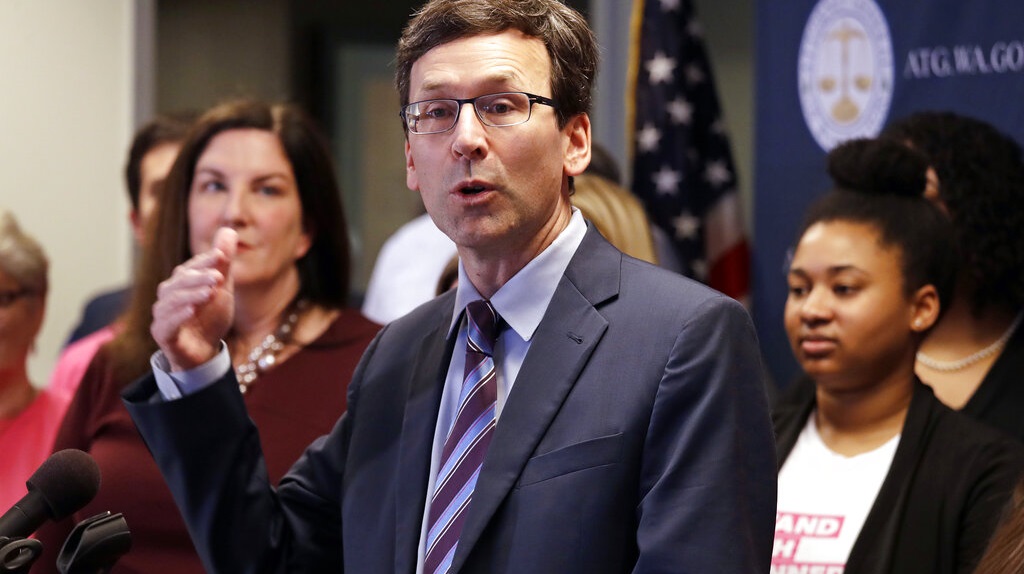 A US judge in Washington state Thursday blocked new Trump administration rules that would provide additional hurdles for women seeking abortions, including by banning taxpayer-funded clinics from making abortion referrals.

Judge Stanley Bastian in Yakima granted the preliminary injunction in cases brought by the state and abortion rights groups, Washington Attorney General Bob Ferguson said. The new rules were due to take effect May 3.

"Today's ruling ensures that clinics across the nation can remain open and continue to provide quality, unbiased healthcare to women," Ferguson, a Democrat, said in an emailed statement.

The ruling came two days after a federal judge in Oregon, hearing a separate challenge by 20 states, said he intended to at least partially block the rules. That judge, Michael McShane, suggested he was reluctant to issue a nationwide injunction, but said the administration's new policy was motivated by "an arrogant assumption that the government is better suited to direct women's health care than their providers."

Title X is a 1970 law designed to improve access to family planning services, especially for low-income women and those in rural areas, but abortion opponents and religious conservatives say it has long been used to indirectly subsidize abortion providers.

Abortion is a legal medical procedure, but federal laws prohibit the use of Title X or other taxpayer funds to pay for abortions except in cases of rape, incest, or to save the life of the woman.

Clinics that receive money under Title X provide a wide array of services, including birth control and screening for diabetes, sexually transmitted diseases and cancer. The program serves 4 million patients, about 1.6 million of whom obtain services through Planned Parenthood.

In addition to banning abortion referrals by taxpayer-funded clinics, the changes would prohibit clinics that receive federal money from sharing office space with abortion providers — a rule critics said would force many to find new locations, undergo expensive remodels or shut down.

"All over the country, there are Title X providers looking at their patient schedules and wondering what they were going to do," said Clare Coleman, president of the National Family Planning &amp; Reproductive Health Association, which sued. "Now we know that everyone can continue to do their care as they have been doing for the past 50 years."

The judge made his ruling from the bench and issued a written opinion later Thursday.

"Plaintiffs have demonstrated the Final Rule likely violates the central purpose of Title X, which is to equalize access to comprehensive, evidence-based, and voluntary family planning," Bastian wrote.

The Department of Health and Human Services declined to comment, citing a policy of not commenting on litigation.

While the new rules would permit clinic staff to discuss abortion with clients, they would no longer be required to do so. If patients ask for an abortion referral, staff would be required to give a list of primary care providers with no indication as to which provide abortions.

The list would have to include providers who do not offer abortions, and it could not include clinics or organizations that aren't primary care providers, such as Planned Parenthood.

Supporters of the changes say they return Title X's regulations back to their original legislative intent that "none of the funds appropriated under this title shall be used in programs where abortion is a method of family planning."

"We're extremely disappointed that a district judge made a ruling — a wrong ruling — that affects the entire nation," said Mark Miloscia, executive director of the Family Policy Institute of Washington, which was not involved in the case. "We support family planning, but not giving it through agencies that kill the unborn."

The legal challenges argue that the changes violate a requirement that patients receive pregnancy counselling that is not weighted for or against abortion, and that it violates the Affordable Care Act's prohibition on regulations that impose "unreasonable barriers to the ability of individuals to obtain appropriate medical care."

Some 98,000 patients in Washington were expected to receive care through Title X this year, Ferguson said.