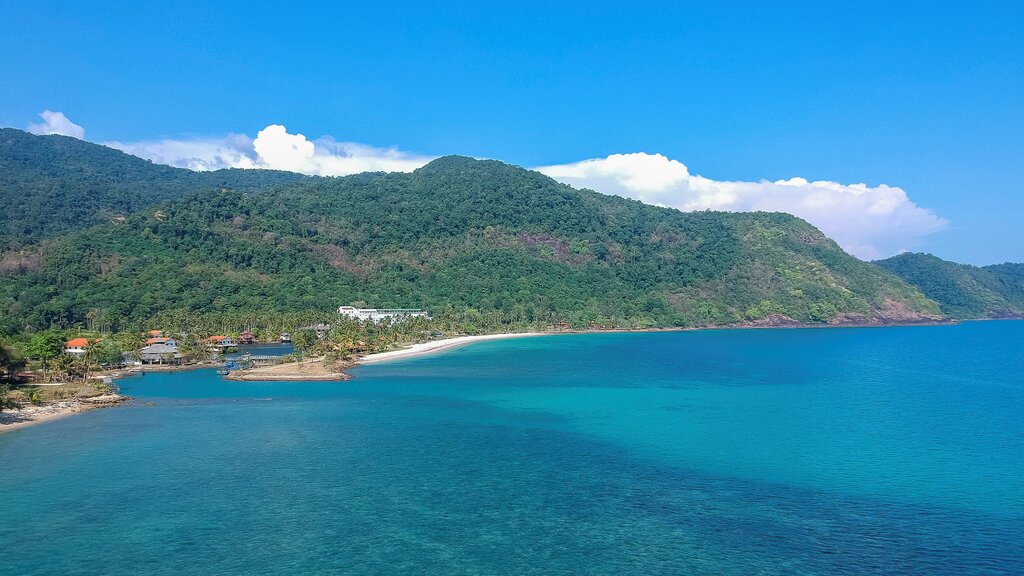 Blue water lines the coast of Koh Chang island in March 2018, Trat Province, southern Thailand. American expat Wesley Barnes, an English-language teacher in Thailand, was sued for criminal defamation by a hotel at which he stayed on the island because of derogatory reviews he posted online. He could face up to five years in prison on two charges if tried and found guilty. (AP Photo/Phusit wirutthanatporn)

BANGKOK (AP) — Labor activists, journalists and whistleblowers in Thailand have been targets in recent years of criminal defamation lawsuits for exposing alleged corporate wrongdoing, but now a disgruntled hotel guest has joined their ranks and could face prison time for his online comments disparaging a hotel.

American expat Wesley Barnes, who teaches English in Thailand, said Tuesday he's anxious to end his dispute with the Sea View Koh Chang hotel, which could end up costing him up to seven years in prison for defamation and violating the Computer Crime Act by posting allegedly false information online.

The case garnered publicity last week when a popular Western blogger in Thailand publicised Barnes’ version of the incident, and the tale spread on social media.

“I have been trying to reach out to the hotel to resolve this issue. Hopefully it will get resolved soon,” Barnes said in an email Tuesday.

In an earlier statement for the media, he said he has lost his teaching job and fears going to prison. He was arrested earlier this month and freed on 100,000 baht ($3,160) bail after being jailed for two nights. His next court date is October 6.

The hotel, on Koh Chang, an island about 300 kilometers (185 miles) southeast of Bangkok, charged in its own statement Tuesday that Barnes had only himself to blame for refusing to retract his reviews on travel sites before the hotel lodged its legal complaints against him.

According to the hotel, Barnes and a friend brought an alcoholic beverage to dinner at the hotel’s restaurant on June 27. When told there was a 500 baht ($16) corkage fee, they complained, and after some negotiation with the food and beverage director, were allowed to pour from their own bottle without paying extra.

Barnes’ version is broadly similar, but added that afterward he saw the food and beverage director, whom he called the restaurant manager, treat a Thai employee abusively, and that’s why he decided to post his critical reviews.

“Do not sleep here! Don’t support modern day slavery of Thai people!” began the most strident review. It singled out the restaurant manager “from the Czech Republic” as being “really bad.” Later postings were similar in tone.

Barnes said a review he sent to Tripadvisor was the basis for the hotel’s criminal complaint.

Tripadvisor said in an emailed statement Tuesday that the review initially submitted by Barnes was posted on its site but was reported by the hotel and taken down for a violation of Tripadvisor's guidelines. He then submitted a new review that was allowed.

“Tripadvisor is opposed to the idea that a traveler can be prosecuted for expressing opinions,” the company said. “Thankfully, on a global basis, prosecutions like this are rare and hundreds of millions of travellers are able to express themselves freely without facing criminal charges.”

The company said it was continuing its investigation into the incident and had contacted the US Embassy in Thailand.

But it was not just a single bad review that raised its ire, the hotel declared.

It accused Barnes of leaving “multiple fabricated and slanderous reviews” on Tripadvisor and Google, and said it filed its complaint with police as a deterrent against further such postings.

It also took umbrage with the mention of slavery and deplored as potentially misleading Barnes’ call for would-be visitors to “Avoid this place as if it was the Coronavirus!”

The latter point may have been the deepest cut of all, because Thailand’s tourism industry has been savaged by the travel bans resulting from the pandemic, and the sector is desperately trying to claw its way back by promoting domestic travel.

“It is not clear to me in what parallel universe having a guest arrested and jailed for a negative review is considered sound hospitality,” Stuart McDonald said in his weekly online newsletter Travelfish.

“There is more to this story of course, much boils down to ‘he said she said’ and fake reviews. The most important aspect though, is Thailand’s deranged defamation law,” McDonald said.

Andy Hall, an activist from the United Kingdom who has faced a raft of criminal and civil defamation and computer crimes lawsuits in Thailand as a result of his work with migrant workers, echoed the point.

“These laws can easily be used maliciously or inappropriately in a variety of ways,” he said in an email. “No one wins from this situation where expensive cases drag on for years thereby also clogging up the court systems.”

Coronavirus cases in the Caribbean to date: 235,207