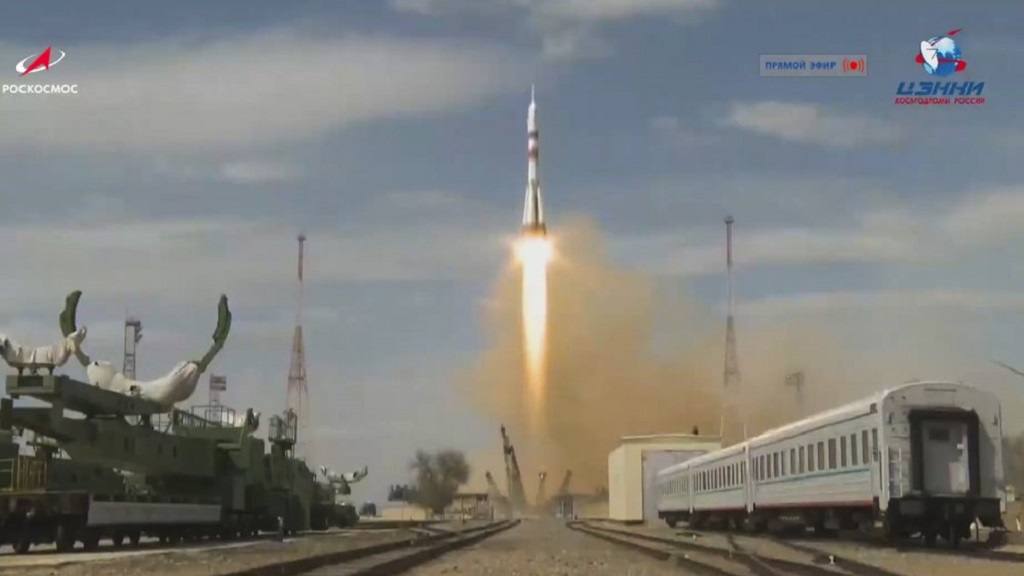 A US-Russian space crew blasted off Thursday to the International Space Station following a tight quarantine amid the coronavirus pandemic.

NASA astronaut Chris Cassidy and Roscosmos' Anatoly Ivanishin and Ivan Vagner lifted off as scheduled at 1:05 p.m. (0805 GMT, 4:05 am EDT) from the Russian-operated Baikonur cosmodrome in Kazakhstan.

Their Soyuz MS-16 spacecraft is set to dock at the station six hours later.

Russian space officials have taken extra precautions to protect the crew during training and pre-flight preparations as the coronavirus outbreak has swept the world.

Speaking to journalists Wednesday in a video link from Baikonur, Cassidy said the crew had been in "a very strict quarantine" for the past month and is in good health.

"We all feel fantastic," he said.

Cassidy pointed out that normally they would be talking to many people at the day-before-launch news conference, but instead were talking to cameras because of the pandemic.

"Obviously, we'd love to have our families here with us, but it's what we understand we have to do to be safe," Cassidy said. "The whole world is also impacted by the same crisis."

Cassidy's wife, Peggy, had returned to the US from the Russian cosmonaut training centre in Star City outside Moscow a few days before the crew left for Baikonur.

Commander Anatoly Ivanishin also noted that extra measures have been taken to keep the crew healthy and safe before launch, adding that none of the crew has had any guests — no family or friends.

"We've been completely isolated at this final stage of training," Ivanishin said.

Roscosmos director Dmitry Rogozin said earlier this week that nine employees of the state corporation have tested positive for coronavirus. Roscosmos, which controls a sprawling network of production plants and launch facilities, has about 200,000 employees, Rogozin said.

As part of additional precautions, Roscosmos has barred reporters from covering the launch contrary to usual practice.

Ivanishin and Vagner had trained as back-ups for the other two Russians and were picked for the flight only in February after a member of the original Russian crew suffered an eye injury.

As a result, neither have clothes awaiting them at the space station.

Ivanishin said that they will be taking some clothes with them on the Soyuz, and the next Russian supply ship will deliver more later.

The mission is the third space flight for Cassidy and Ivanishin, and the first for Vagner.

The International Space Station is currently operated by Russian Oleg Skripochka and NASA astronauts Jessica Meir and Andrew Morgan, who are due to return to Earth on April 17.