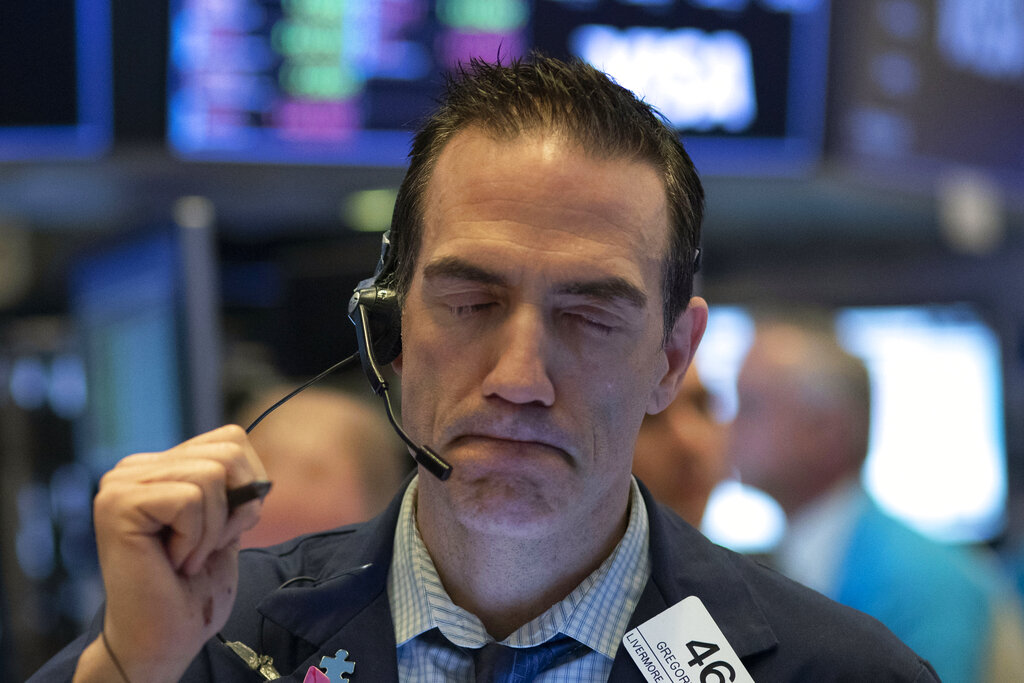 Stocks tumbled close to eight per cent on Wall Street Wednesday and wiped out the last of the gains for the Dow Jones Industrial Average since President Donald Trump's inauguration. Even prices for investments seen as very safe fell as investors rushed to raise cash and the coronavirus pandemic continues to spread.

Markets have been incredibly volatile for weeks as Wall Street and the White House acknowledge the rising likelihood that the outbreak will cause a recession. The typical day this month has seen the stock market swing up or down by 4.9 per cent. Over the last decade, it was just 0.4 per cent.

It was just a day before that the Dow surged more than five per cent after Trump promised massive aid to the economy, but the number of infections keeps climbing, and the Dow slumped to its lowest level since 2016. The S&P 500, which dictates how 401(k) accounts perform much more than the Dow, is down 31 per cent from its record set last month, though it's still up nearly nine per cent since Election Day 2016.

As big swaths of the economy retrench while much of society comes to a halt in an attempt to slow the spread of the virus, investors have clamored for Congress, Federal Reserve and other authorities around the world to support the economy until it can begin to reopen.

They got a big shot of that Tuesday, when the Trump administration briefed lawmakers on a program that could surpass $1 trillion and the Fed announced its latest moves to support markets.

But the worldwide number of known infections has toped 200,000, which creates more uncertainty about how badly the economy is getting hit, how much profit companies will make and how many companies may go into bankruptcy due to a cash crunch.

“It's, it's a very tough situation," Trump said at a news conference, during which losses for stocks accelerated. "You have to do things. You have to close parts of an economy that six weeks ago were the best they've ever been.... And then one day you have to close it down in order to defeat this enemy.”

“The volatility is going to be here to stay,” said Brian Nick, chief investment strategist at Nuveen. “It’s about the virus and not the economic response.”

Wednesday’s selling swept markets around the world. Benchmark US oil fell 24 per cent and dropped below $21 per barrel for the first time since 2002. European stock indexes lost more than four per cent following broad losses in Asia. Even prices for longer-term US Treasurys, which are seen as some of the safest possible investments, fell as investors sold what they could to raise cash. Gold also fell.

“They're just saying, ‘I may take some losses here, but if we have cash we can deploy it when we know more,’” said J.J. Kinahan, chief strategist with TD Ameritrade. “The problem for the market really is we just don't know anymore. And until we really know where things are at, you may see people who just want to have as much cash as possible.” 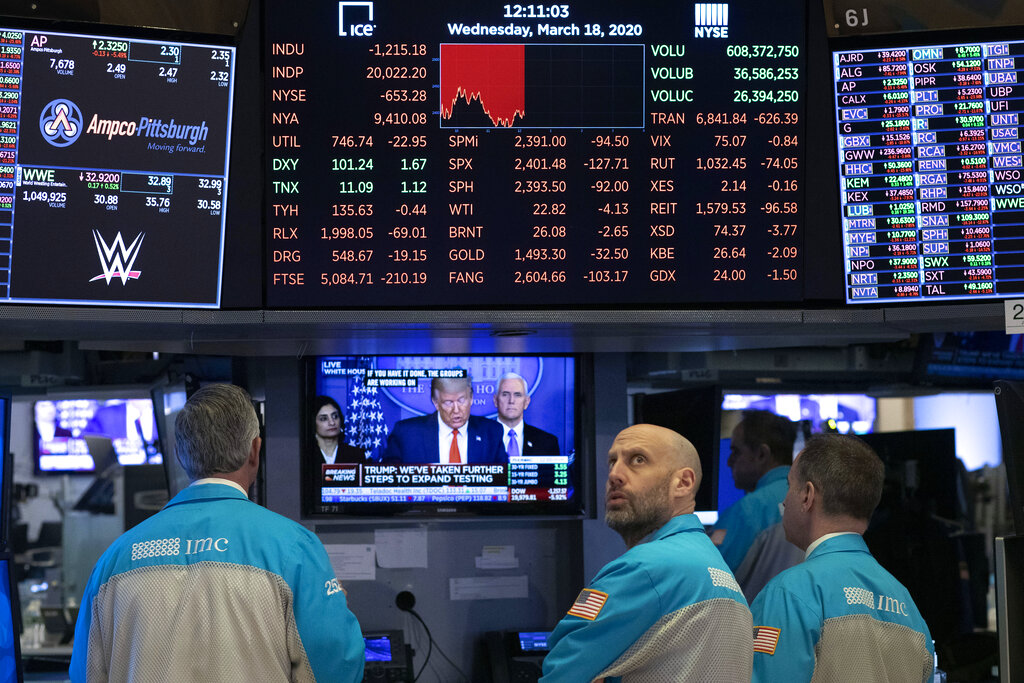 The bond market is also operating under strain, and it hasn’t been this difficult for buyers to find sellers at reasonable prices since the financial crisis of 2008, said Gene Tannuzzo, deputy global head of fixed income at Columbia Threadneedle Investments.

Investors are selling their highest-quality bonds to raise cash, thinking they will be the easiest to sell and will hold up the best. That’s paradoxically undercutting their prices further.

Also exacerbating moves is so many traders making these trades not from their office.

“I’m calling the Citigroup dealer, who’s on his home Wi-Fi with his kid in the living room,” Tannuzzo said. “That causes gaps” in pricing.

For most people, the coronavirus causes only mild or moderate symptoms, such as fever and cough, and those with mild illness recover in about two weeks. Severe illness including pneumonia can occur, especially in the elderly and people with existing health problems, and recovery could take six weeks in such cases.

“These are truly unprecedented events with no adequate historical example with which to precisely anchor our forecast,” Deutsche Bank economists wrote in a report Wednesday.

With all the uncertainty and early evidence that China’s economy was hit much harder by the virus than earlier thought, they now see “a severe global recession occurring in the first half of 2020.”

But they also are still forecasting a relatively quick rebound, with activity beginning to bounce back in the second half of this year in part because of all the aid promised from central banks and governments.

The Dow Jones Industrial Average was down 1,796 points, or 8.5 per cent. If stays there, it would be the eighth straight day the Dow has moved by more than 1,000 points.

All the uncertainty has pushed many people toward safety. Last month, investors pulled $17.5 billion out of stock mutual funds and exchange-traded funds, even though stocks set all-time highs in the middle of the month. Money-market funds, meanwhile, drew $25.5 billion, according to Morningstar.

That was all before the market's sell-off accelerated this month, as broad swaths of the economy shut down in hopes of better containing the outbreak. Restaurants have closed to dine-in customers, planes are parked and sports arenas have been dimmed. Goldman Sachs strategists describe this month as “March Sadness.”