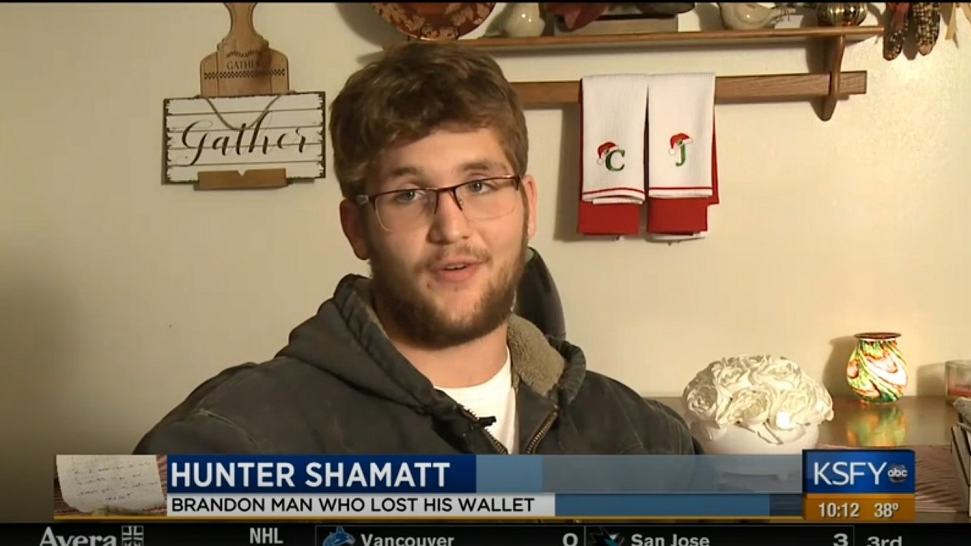 Photo: Hunter Shamatt was given an early Christmas gift after his wallet was returned with extra cash. Photo via KSFY.

Just a month away from Christmas, one man from South Dakota was given an extra Christmas boost, after his lost wallet was returned to him with extra cash.

Hunter Shamatt thought he'd never seen the wallet again when he lost it on a flight to Las Vegas for his sister's wedding. Inside was $60 cash and a check for about $400.

Shamatt tells KSFY-TV he received a package a few days later along with the wallet and a letter.

“Hunter found this on the Frontier flight from Omaha to Denver, row 12 seat F, wedged between the seat and the wall. Thought you might want it back,” the stranger who returned the wallet wrote.

The stranger wrote he found the wallet wedged between a seat and a wall on a flight from Omaha, Nebraska, to Denver. He added $40 so Shamatt would have "an even $100" to celebrate the wallet's return.

The stranger only signed the letter with initials.

Shamatt's was able to thank the man after tracking down his return address in Omaha.Hunter received a package in the mail days later with his wallet and a letter.

“Quite surprised. My whole family was completely amazed. It really meant a lot that he would go out of his way and do that for a complete stranger. I’m still paying off school loans and I got truck loans to pay off so it really helps out,” Shamatt said.

JetBlue is treating do-gooders with trip to Destination Good