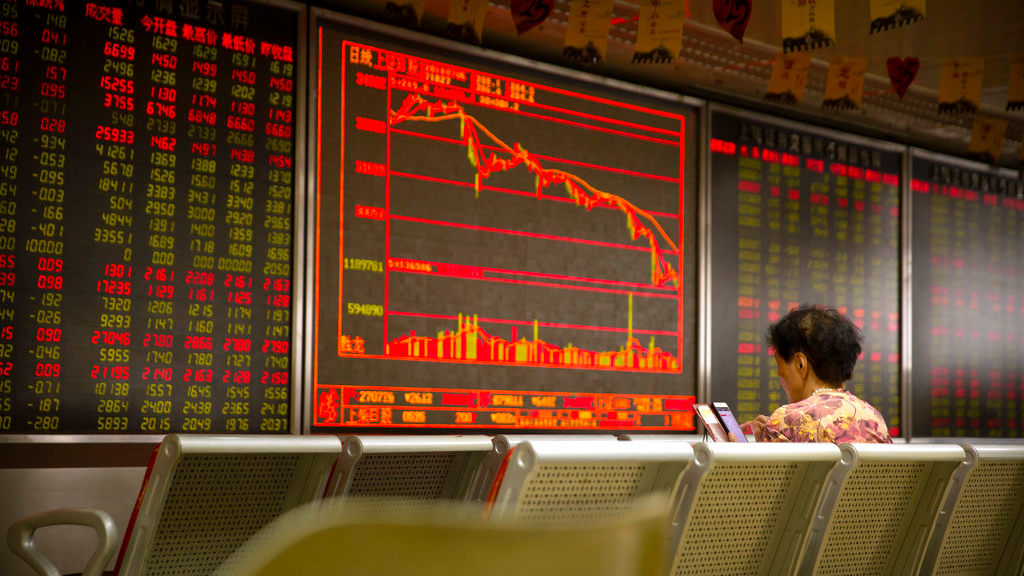 A Chinese investor uses her smartphone as she monitors stock prices at a brokerage house in Beijing, Friday, July 6, 2018. (AP Photo/Mark Schiefelbein)

The United States and China hiked tariffs Friday on billions of dollars of each other's goods, launching what Beijing called the "biggest trade war in economic history" in a spiralling dispute over technology.

The Trump administration is confronting Beijing over development tactics it says include stealing or pressuring foreign companies to hand over technology. American officials worry Chinese plans to create tech champions in fields including robotics, biotech and artificial intelligence will erode U.S. industrial leadership.

Washington imposed 25 percent duties on $34 billion of imports from China in the first in a possible series of increases that President Donald Trump says could affect up to $550 billion of Chinese goods.

China's No. 2 leader, Premier Li Keqiang, said "no one will win by fighting a trade war, yet China will take countermeasures in the face of unilateral moves," the official Xinhua News reported. It said he spoke during an official visit to Bulgaria.

The conflict between the world's two biggest economies reflects the chronic tension in their relationship as customers, business partners and increasingly as competitors. It also is rooted in the clash between American notions of free trade and Beijing's state-led development model.

China's ruling Communist Party has insisted on making changes at its own pace while sticking to state-directed technology development seen as the path to prosperity and global influence. Beijing has announced reforms this year including ending limits on foreign ownership in its auto industry, but none directly addresses complaints that are fueling its conflict with Washington.

On Thursday, Trump said higher tariffs on an additional $16 billion in Chinese goods were set to take effect in two weeks.

After that, the hostilities could intensify: Trump said Washington is ready to target an additional $200 billion in Chinese imports — and then $300 billion more — if Beijing does not yield.

That would bring the total of targeted Chinese goods to $550 billion — more than the $506 billion in goods that China shipped to the United States last year.

Chinese officials reject accusations they steal or force foreign companies to hand over technology. But rules on auto manufacturing and other industries do require companies to work through state-owned partners, obliging them to share know-how with potential competitors.

Other governments express similar complaints toward Beijing, but Washington has alienated potential allies by raising import duties on steel, aluminum and autos from Europe, Canada, Mexico and Japan. Some have responded by hiking their own tariffs on U.S. goods.

"This is a potential concern for the outlook of corporate investment and consumption around world," Hui said.

The official China Daily newspaper accused the Trump administration of "behaving like a gang of hoodlums." It said they would damage the global economy unless other countries stop them.

"There should be no doubting Beijing's resolve," the newspaper said.

Forecasters say global economic growth could be reduced by up to 0.5 percentage points in 2019-20 if both sides wind up raising tariffs on $250 billion of imports.

The American Chamber of Commerce in China appealed to both sides to negotiate.

"There are no winners in a trade war," the chamber's chairman, William Zarit, said in a statement. Companies want fairer treatment but will be hurt by U.S.-Chinese tensions, Zarit said. "We urge the two governments to come back to the negotiation table."