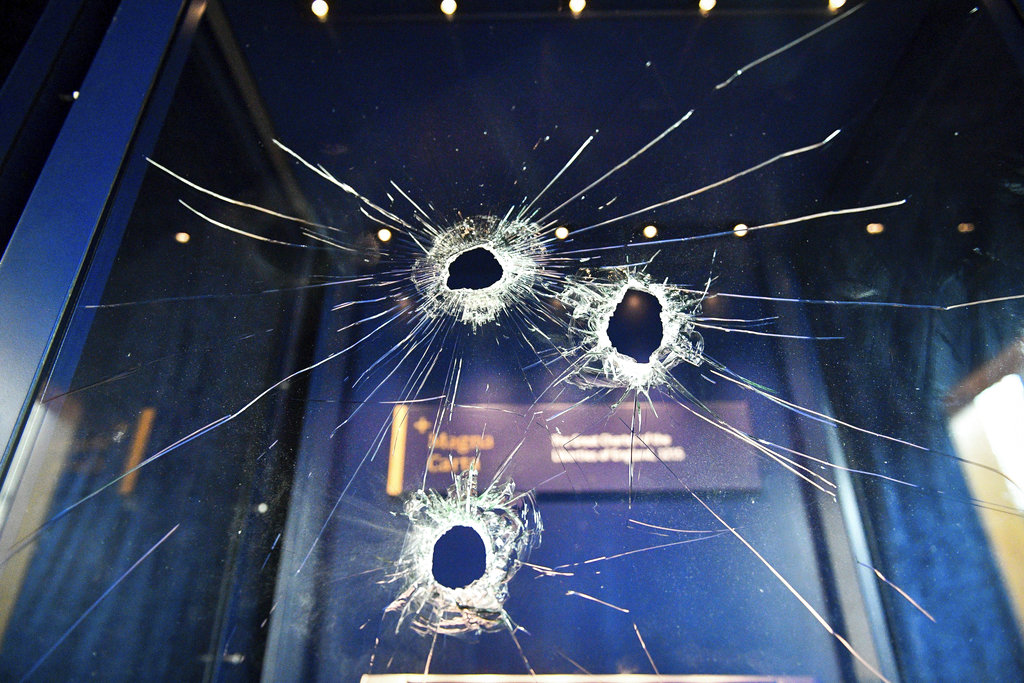 Hammer holes in the glass case that housed the Magna Carta, at Salisbury Cathedral after a 45-year-old man has been arrested on suspicion of its attempted theft, in Salisbury, England, Friday Oct. 26, 2018. (Ben Birchall/PA via AP)

An American tourist from Louisiana reportedly tackled a hammer-wielding thief who unsuccessfully tried to steal the Magna Carta at Salisbury Cathedral, holding him on the ground until help could arrive.

Matt Delcambre, of Little Iberia, Louisiana, told The Sun newspaper in an interview published Saturday that he and his wife Alexis were sightseeing in the southwestern English city when a man tried to shatter the glass encasing the precious manuscript after a fire alarm was set off in the Chapter House of the building. Amid the confusion, Delcambre grabbed the suspect as he fled.

"I just had to stop him," the 56-year old was quoted by The Sun as saying.

Delcambre, the director for the Center for Business & Information Technologies at the University of Louisiana at Lafayette, said he held him on the ground until security could arrive.

"Back home he would have been hog-tied on the ground," his wife Alexis told The Sun.

The document was protected by two layers of thick glass, and the thief gave up and tried to escape.

Wiltshire police said Saturday that a 45-year-old man was freed on bail until Nov. 20 as officers continue their investigation.

Salisbury Cathedral's Magna Carta is one of four existing specimens of the 1215 charter that established the principle that the king is subject to the law. It is considered the founding document of English law and civil liberties and influenced the creation of the U.S. Constitution.

The document, Latin for "Great Charter" was short-lived. Despotic King John, who met disgruntled barons and agreed to a list of basic rights, almost immediately went back on his word and asked the pope to annul it, plunging England into civil war. It was re-issued after the king's death.

Even so, its importance cannot be underestimated, as it has inspired everyone from Mahatma Gandhi to Nelson Mandela.

"I couldn't let him get away with it," Delcambre said. "The Magna Carta is one of the most important documents in the world."