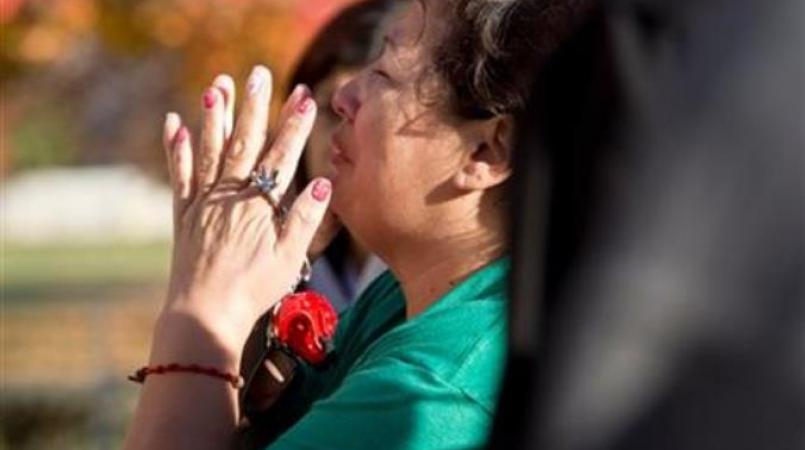 High school junior Karen Martinez was arriving for her first class when she saw three boys run from a locker room toward the school's central office, one with a head wound and another with a neck injury. One had blood running down the back of his shirt.

Inside the locker room, police say, a 16-year-old straight-A student with no record of disciplinary trouble had attacked his classmates at Mountain View High School with a knife as they changed into their gym clothes.

"It was awful," said Martinez, her eyes filled with tears. "It was so terrifying. I didn't know any of the kids but still it was like an awful feeling to see all those kids getting hurt."

On Wednesday, authorities released chilling 911 recordings about the attack a day earlier, with callers to police pleading for help.

In another call, a woman said a boy was in the school's attendance office with stab wounds to his neck and that another victim was on the way.

"We just need some help," she said.

Police say the suspect, a sophomore in his first year at the high school after being home-schooled, also stabbed himself in the neck. He was cornered Tuesday by school workers until a police officer assigned to the school got to the locker room and subdued him with a Taser shot.

Authorities did not identify the suspect by name because of his age.

The five victims are all expected to survive, hospital officials said. The two most seriously injured were in critical but stable condition, according to Utah Valley Hospital.

The attack spread fear and panic among students who described a gruesome scene immediately after the stabbings. Police said the knife used in the attack had a 3-inch blade.

Orem police posted a letter online they said was from the parents of the teen, apologizing. They said none of the victims had done anything to hurt their son and the stabbings were not racially or ethnically motivated.

"We are at a loss to express how deeply sorry we are for the pain and injury caused," the letter says.

Police said it appears the victims weren't singled out for any reason other than being nearby when the attack started.

School district spokeswoman Kimberly Bird said there were no indications the suspect was having problems or being bullied, she said.

Investigators are talking to students who witnessed the attack and who knew the suspect as they try to determine a motive, said Gary Giles, the police chief in the city of Orem about 40 miles south of Salt Lake City where the attack happened.

"Is it a fight? Is it somebody who is upset with somebody? Is there more to it than that?" Giles said. "I don't have those answers."

Student Paxton Ransom was in the locker room when it happened. He saw blood on the floor and thought it was fake until he looked around the corner and saw someone on the ground who had been stabbed. He ran away and hid with other students in the school's weight room, texting his mother "There's been a stabbing but I'm ok."

She joined hundreds of parents who rushed to the school to find out if their children were safe, letting him go back to classes after giving him a hug.

The school, with 1,300 students, was put on lockdown after the stabbings for about an hour until police determined there was no danger for students. Some parents took their children home and others allowed them to finish the school day.

Utah Gov. Gary Herbert's children attended the school years ago, and he tweeted, "It's a community close to our hearts. My prayers are with the students and staff."

The school plans to investigate if the suspect had had been acting in a way that should have been addressed by school officials prior to the attack, Bird said.

The school bans weapons but doesn't have metal detectors or other security procedures to check students each day, she said. It's unlikely they'll implement any of those now, either, because they don't want to make the school feel like a prison, Bird said.