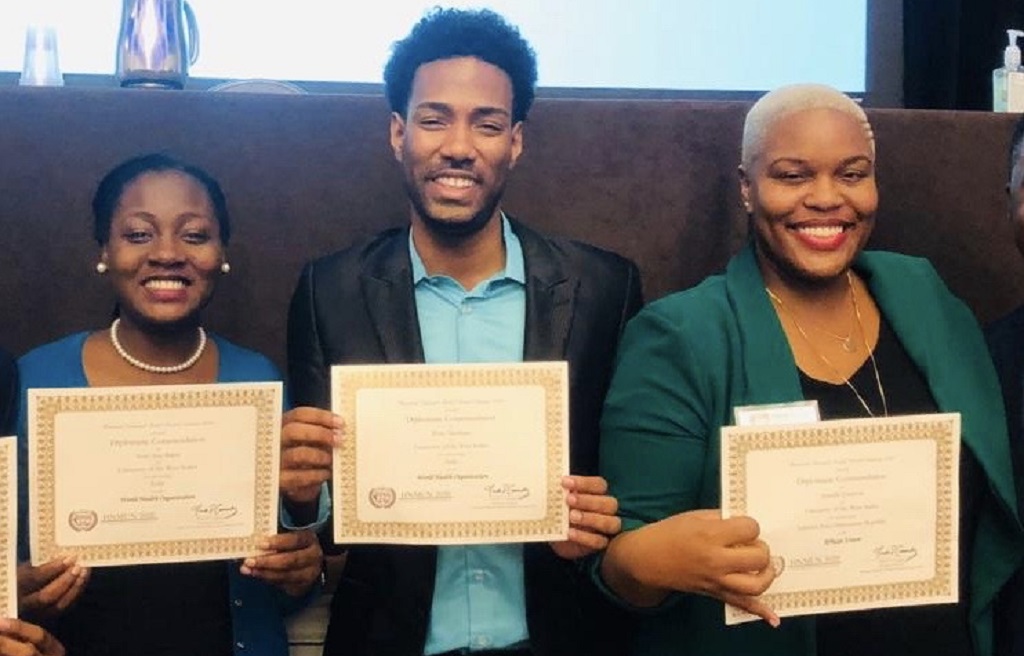 IIR graduate student Joneille Johnson described the moment as staggering. Johnson is one of three delegates to receive a commendation. She said the experience at the HNMUN, held from February 13 to 16 at the historic Park Plaza Hotel in Boston, made her “incredibly proud.”

Baker said: “I feel so many emotions even now as I reflect. This is my second time winning an award in a co-delegation and the first-ever two-time awardee. I am over the moon. I hope that I can transfer my knowledge and hopefully become one of the trainers in the future.”

Baker was one of four IIR students who took part in the 2019 HNMUN and with her partner at that time, Tonicia Williams won “Outstanding Delegates”. She and UWI St Augustine’s IIR have now competed and won twice against Harvard, Yale, Oxford and others.

A model UN gives students the opportunity to “roleplay” the life of a diplomat engaged in arguing for a resolution at the world’s highest international body. The goal is to be part of the crafting of the winning resolution, which requires great research, public speaking and the ability to form alliances with other delegates. HNMUN, which just completed its 66th session in 2020, is recognised as the longest-running and one of the largest college-level Model UNs in the world.

He said: “First, the intense training and preparations organised and executed for delegates. Second, the training team involved in the preparations all of whom are former delegates: Mr Brandon Rampersad (former head delegate, Mona Campus), Mr Nestor Garcia [who won Diplomatic Commendation in 2019], Ms Usha Lakhan and Mr Andel Andrew (St Augustine). This has allowed the team to gain first-hand insights and knowledge of the competition.”

Dr Chami also praised the three delegates: “the students must be commended for their determination, dedication and drive to succeed and excel at HNMUN.”