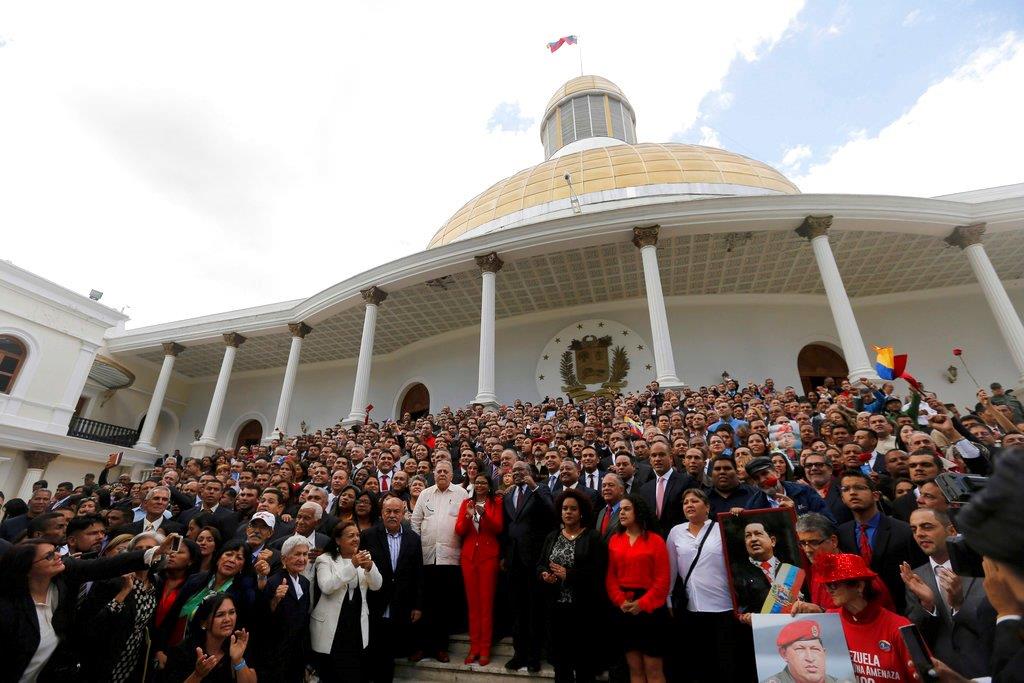 In this Aug. 4, 2017 file photo, Venezuela's Constitutional Assembly poses for an official photo after being sworn in, at the National Assembly in Caracas, Venezuela. (AP Photo/Ariana Cubillos, File)

Venezuela's all-powerful constitutional assembly passed a wide-reaching law on Wednesday that clamps down on social media and broadcasters alike by ordering prison sentences of up to 20 years for anyone who instigates hate.

The pro-government assembly passed the law, accompanied by rousing applause and flag-waving on the chamber floor. It prohibits Venezuelans from spreading any message through television, radio or social media that instigates violence or hate.

It drew swift criticism from international human rights advocates, who say the new law cracks down on dissent by criminalizing peaceful protests, the hallmark of a democratic society.

"The law seeks to end free speech in social media — a key space for Venezuelans to express themselves in a country with shrinking free speech avenues," said Jose Miguel Vivanco of the New York-based Human Rights Watch.

Opposition party leaders have vowed not to participate in upcoming municipal elections.

The law requires administrators of social media accounts to immediately remove any hateful posts. It also calls for the creation of a commission to enforce the anti-hate law, which carries punishments of 10 to 20 years in prison.

The new pro-government constitutional assembly was installed in August and given virtually unlimited powers. Many foreign governments consider the assembly illegitimate.

Constitutional assembly president Delcy Rodriguez, who oversaw the law's passage, defended it as sending a strong message to anybody wanting to promote war. Rather, they should spread of "messages of peace," she said.

"This is a law that promotes peaceful coexistence," she said. "Something that the world needs precisely in these moments when the imperial powers threaten with more war."