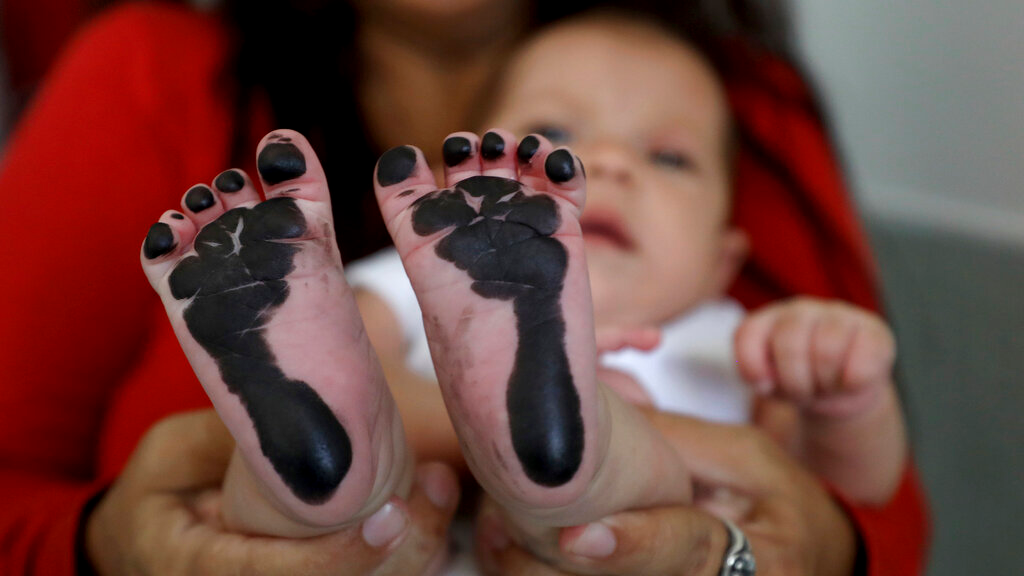 Arelys Pulido holds her two-month-old daughter Zuleidys Antonella Primera after she had her feet prints taken for her birth certificate at the Erazmo Meoz hospital in Cucuta, on Colombia's border with Venezuela, Thursday, May 2, 2019. (AP Photo/Fernando Vergara)

Arelys Pulido had already lost one baby in a neglected Venezuelan hospital where doctors and medical gear are in increasingly short supply, so when she got pregnant again she decided to give birth in a foreign land.

She packed suitcases filled with clothes and a few prized ceramic statues of saints that she hoped would grant her and her unborn child protection as they passed through one of the perilous illegal crossings into Colombia.

Earlier this year, Zuleidys Antonella Primera was born, a lively girl with dark hair and eyes bearing no hint of the odyssey her mother went through so she could deliver her in a hospital across the border in the city of Cúcuta.

Yet little Zuleidys so far has neither the citizenship of the country her parents fled nor that of the nation where she was born. She is one of a growing number of children who have been left essentially stateless.

"It's one more thing to worry about," said José Antonio Primera, the baby's father, a former military officer who now paints motorcycles for a living.

While the children born to migrants qualify for Venezuelan citizenship, they would need to formally register at a consulate or travel to Venezuela to obtain it. Both options are out of the question for many families. They do not want to return until conditions improve and consulates are closed after President Nicolás Maduro severed diplomatic relations with Colombia in February.

Colombia's government grants the newborns full health care during the first year of life and allows them to enrol in school, but experts on statelessness fear that if Venezuela's crisis drags on for years, they could approach adulthood without key rights such as the ability to travel legally, buy property or get married.

Colombia's National Civil Registry counts at least 3,290 children born since December 2017 who have been unable to obtain citizenship. Rights groups contend the numbers could be as high as 25,000.

Even by the lowest count, advocates say, the number of children at risk of statelessness now living in Colombia is worrisome.

"It is a significant number when you think of it being created out of one crisis," said Amal de Chickera, co-director of the Netherlands-based Institute on Statelessness and Inclusion. "And if it is prolonged and if it's not nipped in the bud it can become much bigger."

Nearly 1.3 million Venezuelans now reside in Colombia, about 40% of whom are in the country without any legal status. Colombia has received more Venezuelan migrants than any other nation, and the numbers are not expected to dip any time soon. Even with the border between the neighboring countries officially closed, thousands stream into Colombia each day using the same dirt roads that Pulido crossed while pregnant.

Colombia's constitution only offers birthright citizenship to children who have at least one Colombian parent or a mother or father who can prove legal residency based on visa status.

Many Venezuelan arrivals do not have a passport, let alone a visa. A temporary, two-year visa that Colombia's government has provided as a stopgap measure to nearly 600,000 Venezuelans does not qualify babies for citizenship.

That has left many babies in a legal limbo.

Colombian officials say it is Venezuela's fault that a new generation of children born abroad are virtually statelessness, but they are working on finding a remedy.

"We're all in agreement that exceptional measures need to be taken," said Alfredo Posada, a spokesman for Colombia's National Civil Registry.

A government proposal in the works would allow any Venezuelan child born in Colombia since the current exodus began in August 2015 to qualify for citizenship and is expected to be approved in the weeks ahead while legislators are considering a similar bill in congress.

Statelessness first became an international concern between World War I and World War II as the population of those fleeing persecution or excluded from nationality laws rose, said David Baluarte, an expert on statelessness at Washington and Lee University.

The issue caused heightened alarm during World War II when Jews were stripped of their citizenship in Nazi Germany before being sent to concentration camps.

Two United Nations treaties were created protecting the right to citizenship, but today an estimated 10 to 15 million people around the globe are considered stateless.

Statelessness experts say the onus is on Colombia to rectify the status of Venezuelan children born on its territory.

"In the present moment, these children would be stateless in Colombia, so the obligation is on them to grant citizenship," de Chickera said. "That would be a really strict reading of the law, but I think it's important to take into consideration that this is quite an extraordinary moment."

When born in Colombia, the children are given a birth certificate, but it clearly states at the bottom, "Not valid for nationality."

At the present moment, Venezuelan parents can try going through the courts to get Colombian citizenship for their children, but few have succeeded. Two cases are currently being considered by the constitutional court, said Lucía Ramírez, a coordinator for investigations and migration issues at the human rights non-profit Dejusticia.

Others have tried going through the Ministry of Foreign Relations, which must consider any cases in which a foreign consulate does not provide citizenship within three months. Ramírez said Dejusticia is only aware of one case that has succeeded to date. That child, however, was not born to Venezuelan migrants.

"It's not a pathway that people are using," she said.

At the Erasmo Meoz University Hospital in the border city of Cúcuta, parents clutching newborns stand outside a registry office, eager to ink their children's feet and obtain their official birth record, only to find out the country isn't granting them citizenship.

"The normal thing to do would be for them to all get Colombian citizenship," said Eduardo Bravo, a former police officer, while bouncing his infant daughter in his arms. "We aren't here in Colombia because we want to be. It's out of necessity."

Pulido, 44, first crossed the border into Colombia four months into her pregnancy for ultrasounds she couldn't get in her home country. The journey on foot and over a river on a makeshift canoe wore on her, as did painful memories of her last pregnancy: The child died during childbirth after a usually minor complication. Pulido blames that on Venezuela's worsening humanitarian crisis.

"Several friends died giving birth there," she said. "I had to come."

At eight months pregnant, she packed her bags and left for good.

On a recent afternoon, Pulido and her husband Primera examined the piece of white paper with their daughter's tiny black footprints provided by the hospital. They were at a loss of how to interpret it, at once happy but also confused.

The couple said they didn't care so much about whether Zuleidys grows up Colombian or Venezuelan so long as one of those two countries recognizes her.

"As long as she has rights like any other human being, as a citizen," Primera said.

In the meantime, the family is struggling with a host of equally or more pressing concerns as they try to build a new life abroad. Work has been hard to come by for Primera. The couple sleeps with the baby on a mattress on the floor in an apartment with three rooms that house 13 people. And they still don't have a refrigerator.

The statues of saints that Pulido lugged across the border sit on a concrete cement shelf below reused Pepsi bottles storing water.

"We're in the hands of God," Primera said.