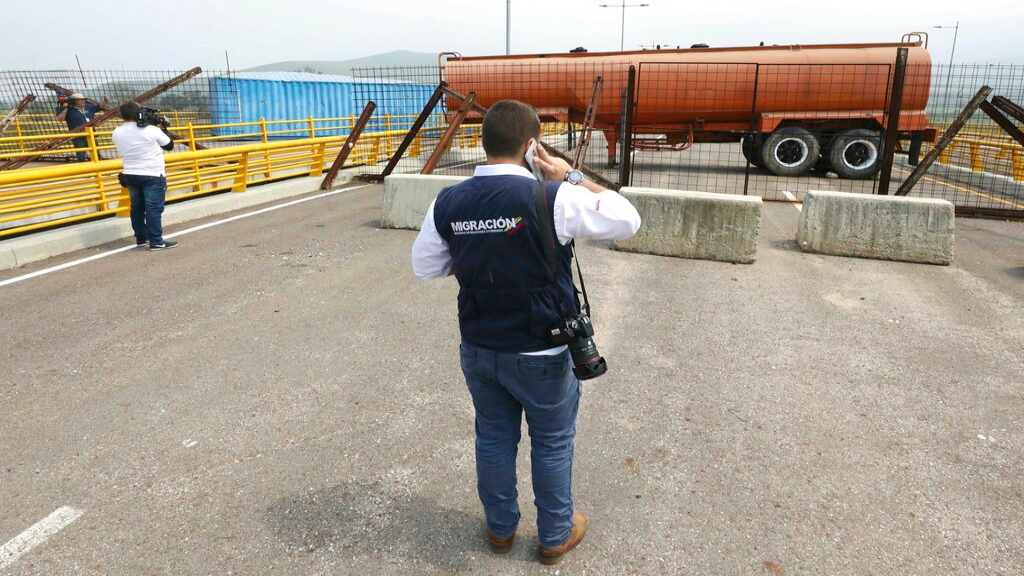 An immigration official observes a fuel tanker, cargo trailers and makeshift fencing, used as barricades by Venezuelan authorities attempting to block humanitarian aid entering from Colombia on the Tienditas International Bridge that links the two countries as seen from the outskirts of Cucuta, Colombia, Wednesday, Feb. 6, 2019. (AP Photo/Fernando Vergara)

The Venezuelan military has barricaded a bridge at a key border crossing, issuing a challenge on Wednesday to a U.S.-backed effort by the opposition to bring humanitarian aid into the troubled nation.

The Tienditas International Bridge was blocked a day prior by the Venezuelan National Guard with a giant orange tanker, two large blue containers and makeshift fencing near the border town of Cucuta, Colombian officials said.

The bridge is at the same site where officials plan to store humanitarian aid that opposition leader Juan Guaido is vowing to deliver to Venezuela. The Trump administration has pledged $20 million in aid and Canada has promised another $53 million.

The squabble is now the latest front in the battle between Guaido and President Nicolas Maduro, who is vowing not to let the supplies enter the country. Maduro argues Venezuela isn't a nation of "beggars" and has long rejected receiving humanitarian assistance, equating it to a foreign intervention.

Looking up at the giant containers blocking the bridge Wednesday, aid worker Alba Pereira shook her head and dismissed the barricade as another government ploy. She said that humanitarian volunteers would find a way to get the aid into the country regardless.

"It's a means of intimidation, but I don't think it will accomplish anything," said Pereira, director of the nonprofit Entre Dos Tierras, which aids Venezuelans migrants.

Roughly 40 countries around the world have backed Guaido, who swore himself in as president in late January contending that as head of the opposition-led National Assembly he is Venezuela's rightful leader because Maduro's re-election last year was a sham.

Guaido says the emergency shipment is a "test" for Venezuela's armed forces, which will have to choose if they allow the much needed aid to pass, or if they instead obey orders. No details have been released on exactly how the opposition plans to get the shipments into Venezuela.

Soaring hyperinflation has forced millions of Venezuelans to flee or go hungry as they struggle to find or afford basic items like food and medicine.

An emphatic U.S. Secretary of State Mike Pompeo said that Venezuelans desperately need the emergency supplies that the U.S. and other countries are preparing to provide.

Guaido on Wednesday accused Maduro's government of rejecting the assistance because officials often handed out imported food and medicine in exchange for bribes.

"We don't want to depend more on a food subsidies than is necessary today," he said, calling the blockade an "absurd reaction from a government that doesn't have the interest and well-being of Venezuelans" in mind.

Maduro has clung to power with the support of Venezuela's highest-ranking military officers. He dismisses Guaido as a puppet of the United States, which he says is seeking to colonize Venezuela and exploit its vast oil resources.

In his State of the Union address Tuesday night, U.S. President Donald Trump vowed to ratchet up pressure on Maduro, saying that the U.S. stands with the people of Venezuela.

"We condemn the brutality of the Maduro regime, whose socialist policies have turned that nation from being the wealthiest in South America into a state of abject poverty and despair," Trump said.

In a trip to Washington on Wednesday, Colombian Foreign Minister Carlos Holmes Trujillo said that any attempt to block aid from entering Venezuela is tantamount to "a crime."

"Committing such a crime would give even more reason for the unified countries to ask the International Criminal Court to investigate Maduro," Trujillo told reporters after a meeting with the head of the Organization of American States, Luis Almagro.

Colombia shares a 1,370-mile (2,200-kilometer) border with Venezuela and is backing Guaido. The neighboring Andean nation has received over one million Venezuelan migrants in the last three years.