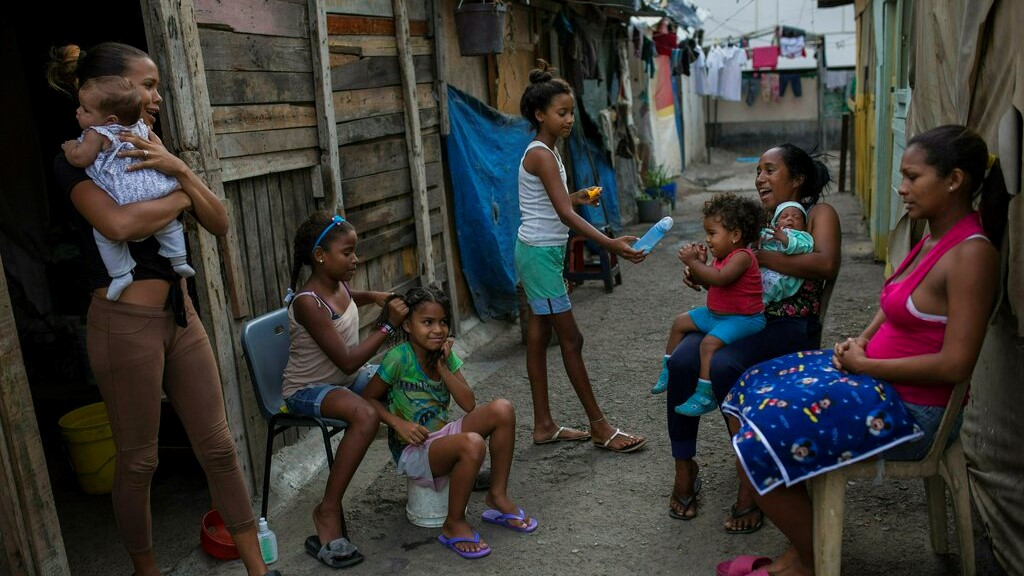 Families gather outside their home in the "Aguerridos Liberator" shanty town in Caracas, Venezuela, Thursday, May 9, 2019. (AP Photo/Rodrigo Abd)

The Venezuelan government is seeking to ease the country's isolation, reopening borders with Aruba and Brazil after shutting off sea and land access in February to block the opposition from delivering humanitarian aid.

In Venezuela, meanwhile, a court ordered Edgar Zambrano, vice president of the opposition-controlled National Assembly, to be jailed at a military facility following his detention for supporting an April 30 call by the opposition for a military uprising to overthrow Maduro. Opposition leader Juan Guaidó announced that more protests will be held on Saturday despite concerns that the government is widening a crackdown on members of the congress that he heads.

El Aissami, who has denied U.S. allegations of his involvement in drug trafficking, said on state television that he hopes the two islands "avoid becoming instruments of aggression against the territory of the Bolivarian Republic of Venezuela."

The South American nation's socialist government ordered the borders with Aruba, Bonaire, Curacao, Brazil and Colombia closed three months ago as the opposition tried to deliver food and medical supplies.

The aid was provided largely by the United States, a key ally of Guaidó, who is recognized by over 50 nations as Venezuela's rightful president. Maduro dismissed the aid push as an infringement on Venezuela's sovereignty and a U.S.-backed attempt to remove him from power.

The bulk of the assistance was stored in Colombia, while smaller amounts were held in Brazil and the Caribbean. Opposition leaders tried driving the aid across the land borders in trucks but were blocked by state security forces.

El Aissami said Maduro's government held talks with Aruba and Brazil and said they'd reached the "necessary agreement" to ensure that another attempt to force aid into Venezuela would not occur.

He said that until the other two Dutch Caribbean islands and Colombia assure Venezuelan authorities that they will cease any attempts to destabilize Maduro's government, those borders will remain closed.

Relations between Venezuela and its neighbours have grown increasingly prickly as many leaders in the region have support Guaidó's claim to the presidency and efforts to remove Maduro from power.

The border closure has had an especially strong impact on tens of thousands of Venezuelans who typically cross into Colombia daily, searching for food, medicine or a new life outside the struggling nation. Many are now crossing illegally through dozens of illegal dirt pathways where criminal groups charge for passage and frequently rob or assault those trying to enter.

In Colombia, President Iván Duque on Friday accused the Venezuelan government of supporting terrorism by allegedly providing refuge to senior members of the National Liberation Army, a Colombian rebel group also known by its Spanish initials ELN. Maduro has provided weapons, money and other aid to the ELN for years in violation of international law, according to Duque. Venezuela has denied the allegations, saying Colombia is trying to divert attention from its domestic problems.

Also Friday, the U.S. Treasury Department said people in the defence and security sector of the Venezuelan economy could be subject to sanctions, in what it said was a response to the arrest of members of the opposition-controlled National Assembly in Venezuela. It also imposed sanctions on two companies — Monsoon Navigation Corporation and Serenity Maritime Limited — said to be operating in the Venezuelan oil industry.

Pompeo going to Russia amid disputes over Venezuela, Arctic