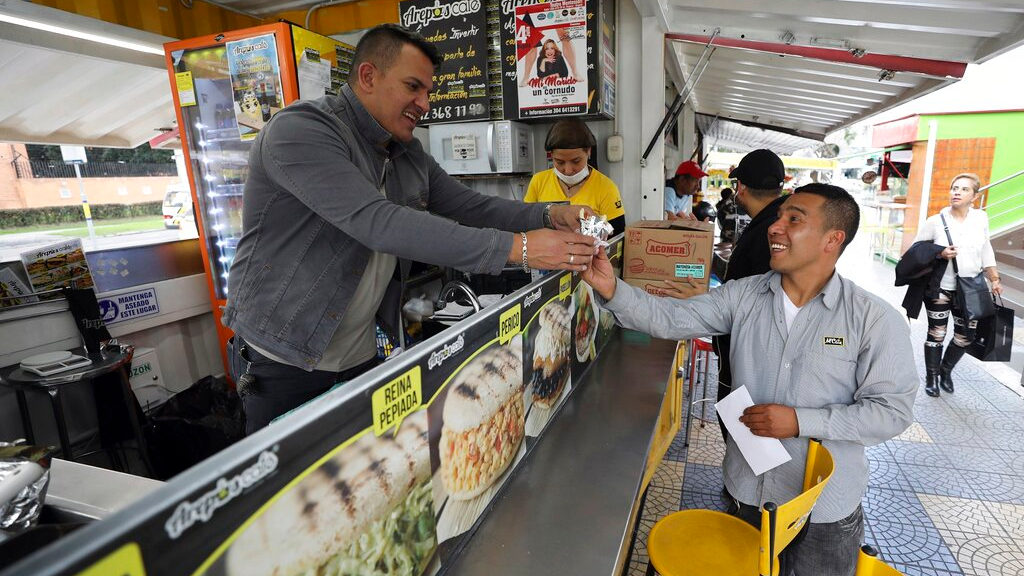 Venezuelans like to jest that their beloved arepas are so widely consumed that babies come out of the womb with the corn flatbreads already in hand.

Now, as millions flee their homeland's turmoil, they are taking Venezuela's most ubiquitous dish with them.

Humble street stalls and sit-down restaurants serving arepas are popping up throughout the streets of Colombia's capital and in cities around the world, where many are finding the white corn flour patties an ideal means for gaining their footing in a foreign nation. Others are exchanging traditional fillings for local flavors in a nod to their adopted countries.

"For us, the arepa represents Venezuela," says Alejandra Castro, who opened an arepa business in Buenos Aires, Argentina over a year ago. "It's our culture, our daily bread. What one misses and longs for the most is an arepa."

The arepa's surge on the world stage comes as its consumption steadily declines back home amid a punishing financial crisis worse than the U.S. Great Depression, leading an estimated 4 million people to flee.

Migrants throughout the world have long brought their culinary traditions with them in something of an antidote for nostalgia. Cubans fleeing Fidel Castro's revolution in the 1960s cooked classics like ropa vieja and picadillo in their small apartments in Miami's Little Havana.

In some cases, traditional recipes are kept more alive abroad than back home.

More often than not, however, migrants slowly fuse the flavors of the country they left behind with the one they now call home. Chinese and Japanese migrants profoundly altered Peruvian cuisine, creating a delicate hybrid with Incan and European influences that has garnered worldwide acclaim. The influence of Lebanese arrivals cooking shawarma in Mexico led to the creation of tacos "al pastor" with spit-roasted pork.

Jeffrey Pilcher, a history professor at the University of Toronto, said migrants are often forced to reconcile a longing for the authentic taste of home with the need to make a living and offer more local flavors.

"So there are all manners of adaptations people make to balance those two, kind of contradicting desires," he said.

Venezuelans in Bogotá are now serving up arepas with Colombian flavors like local chorizo and red beans. In Lima, they are stuffing the patties with lomo saltado, a Peruvian marinated, stir-fried beef. And in Argentina, one business adds in a dash of chimichurri sauce.

Migrant Edgar Rodríguez became one of the earliest ambassadors of the food when he fled to Spain over a decade ago and opened up an arepa restaurant. He now has several fusion items on the menu including Spanish staples like serrano ham.

"As they say in Venezuela, 'The arepa can withstand anything," he said.

The story of the arepa begins before the arrival of Spanish colonizers, when indigenous chefs in Colombia and Venezuela ground white corn into round patties and baked them on clay griddles. Today, Colombian arepas are relatively wide and flat, while the Venezuelan ones are smaller, fuller and stuffed with fillings in the same style as pita bread. In both countries, they are a dietary staple.

When Venezuela was one of Latin America's most prosperous countries, the poor and the wealthy would typically eat two or three arepas a day. In the 1990s, the country's production of white corn flour rose to 800,000 tons a year, said Carlos Paparoni, an opposition lawmaker who tracks the country's agrarian crisis. But last year, production dipped to a paltry 140,000 tons, he said.

Empresas Polar, Venezuela's largest private food supplier, said in its most recent financial report that it received just over half of the required amount of raw corn product needed to maintain production levels of its gold standard corn flour.

The government itself provides boxes of subsidized food which now include Mexican corn flour used for tortillas that tends to result in unrecognizable arepas.

Venezuelans apt to find humor even amid crisis have taken to social media to share sometimes comical creations with the Mexican flour.

One woman tried making tacos filled with Venezuelan favorites like black beans and plantains and ended up with a plate of beige-colored tortillas with crispy edges and a rubbery consistency. Another person made a lackluster cake.

More recently, the so-called CLAP boxes to Venezuela's poor came with actual kernels of corn instead of corn flour, sparking a wave of outrage.

"The regime wants us to sit back and watch the destruction of our country with popcorn," one angry recipient opined on Twitter.

The first migrants to flee the Venezuela's shortages found it hard to track down white corn flour in distant lands like Spain and Argentina. But these days, new arepa restaurants abroad are opening monthly and shipping in pallets of Venezuelan ingredients, often produced in the U.S. and other countries.

"It's the unexpected and even 'tasty' culinary counterpart of a humanitarian tragedy," Venezuelan journalist Vanessa Rolfini wrote recently.

Not everyone, however, is finding their new takes on the arepa to be easily accepted.

Jorge Udelman tried putting Mexican ingredients like cochinita pibil, a slow-roasted pork, in arepas. Customers said they liked his food but already had restaurants they'd going to for decades to get traditional flavors.

"I can't compete with three generations of a family making the same recipes," he said. "It's not in my DNA."

Today, he sticks to traditional Venezuelan recipes at his arepa restaurant in Mexico City.

Such experiences are somewhat reflective of the hurdles that Venezuelans are encountering as they try to integrate into new cultures.

"There is certainly no guarantee that the acceptance of the food is going to lead to positive feelings around the migrants themselves," Pilcher said.

But Gerson Briceño is one of the migrant success stories.

The former head of a publicity company in Venezuela fled to Colombia after his wife and young daughter were briefly kidnapped at gunpoint. He first started a cellphone business, but opened an arepa stand outside a mall in December 2017 when he found himself wanting to pay tribute to his cherished homeland.

"I always missed the flavor of home," he said.

He said he takes pride in seeing Colombians become repeat customers and order classics like the reina pepiada with chicken salad and avocado. But he's also created two new arepas filled with Colombian flavors. One is stuffed with cheese and sausage, while the other features most of the ingredients in a typical bandeja paisa, a dish common in Medellin that includes an egg, red beans, steak, crispy fried pork skin and a plantain.

Colombia Martha Patricia Chaparro and her daughter recently gave it a try, marveling at the unorthodox invention.

"I don't think it would have ever occurred to us," she said, "to put a bandeja paisa in an arepa!"