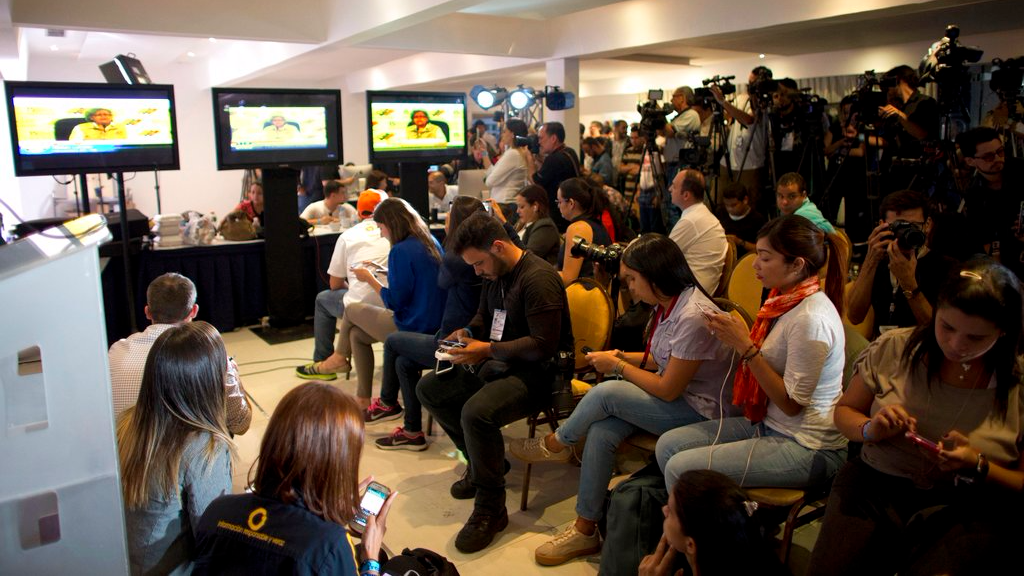 Pro-government candidates have swept to an unforeseen victory in Venezuelan gubernatorial races according to official results that have quickly been challenged by the country's opposition.

Tibisay Lucena, president of the government-stacked National Electoral Council, announced late Sunday that the socialist party had won 17 of 22 races in which the outcomes were considered irreversible, with one other race too close to call. It was a dramatic contrast to pre-election polls that projected widespread victories for the opposition.

The council said 61 percent of the nation's 18 million voters participated, a rate far higher than many people had anticipated in a country where many have grown disenchanted and apathetic.

"Neither the Venezuelan people nor the world buy that story," he said.

An hour before results were announced, the opposition's command centers had been filled with smiles and jubilation. Leader Ramon Guillermo Aveledo told a room filled with journalists and supporters that while he couldn't share the preliminary results, they showed a victory of "historic dimensions" for the Venezuelan people.

Independent pollsters also had projected that opposition candidates would win a majority, if not nearly all offices at a time when the country's economy is plummeting at depression-era rates, inflation is in triple digits and crime is rampant.

"There is a wide disparity between the poll numbers and the results which show that these elections were not free and fair and don't reflect the will of the people," said Michael Shifter, president of the U.S.-based Inter-American Dialogue.

The opposition called for an audit and urged Venezuelans to mobilize on the streets Monday in support.

Maduro said he had "absolute faith" in the official results but would ask the constitutional assembly to request an audit in order to extinguish any doubts.

"A triumphant victory for Chavismo!" he proclaimed, referring to the movement founded by his predecessor and mentor, Hugo Chavez.

The disputed result threatened to heighten an already sometimes-violent standoff between the government and opposition. Four months of anti-government protests that began in April left at least 120 people dead, mostly young men in their 20s and 30s.

The regional elections were originally scheduled to take place last December, but the electoral council postponed the vote after polls indicated socialist candidates were widely slated to lose. They were repeatedly delayed again for a variety of reasons.

In August, a new pro-government assembly was installed to rewrite the constitution following an election boycotted by the opposition and challenged as manipulated by some voting experts.

The new assembly quickly removed the nation's independent chief prosecutor, declared itself superior to all other branches of government and set the delayed gubernatorial elections for October.

While many Venezuelans express anger at the government, many too say they are frustrated with opposition leaders they perceive as disorganized. Some have said they are skeptical that any change could happen at the ballot box, given accusations the electoral council is tilted toward the ruling party.

Meanwhile, pro-government candidates like Hector Rodriguez waged strong campaigns, trading the polarizing red shirts identified with the socialist party for neutral colors. Rodriguez promised to resolve the daily problems of Venezuelans and heal the divisions that have come to define the nation.

It was a message that resounded with voters like Sergio Camargo, a private security guard.

"I hope that after this vote, the people against the government of President Nicolas Maduro are more sensible and let him govern," he said before getting on a bus to vote Sunday.

The electoral council did not allow the opposition to remove several candidates who lost in a September primary, despite an electoral law permitting political parties to substitute contenders up until 10 days before the vote. Less than three days before voting, the council also announced it was moving more than 200 voting centers, predominantly in opposition strongholds.

Council officials defended the relocations as a security measure in areas where violent protests took place in July.

Opposition-arranged buses transported voters to the new sites, some of which were nearly an hour away.

Susana Unda, a homemaker who voted for Carlos Ocariz, the opposition's candidate in populous Miranda state surrounding Venezuela's capital, used her truck to transport voters whose polling sites were relocated.

Government supporters said the count is proof that the movement started by Chavez remains alive and well, despite Maduro's low approval ratings.

"The cradle of the revolution doesn't surrender," said Argenis Chavez, the late president's brother and declared winner of the race in Barinas state, where Hugo Chavez spent his early years.

Ophelia post-tropical but has hurricane strength