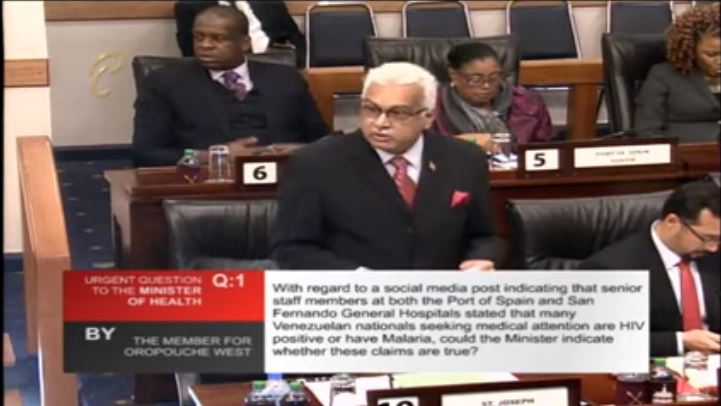 Health Minister Terrance Deyalsingh has revealed that Venezuelan nationals have imported 13 cases of malaria to Trinidad and Tobago.

The Minister made the revelation in parliament in response to questions posed by Opposition West MP, Vidia Gayadeen-Gopeesingh. She questioned whether there was any truth to a social media post which said senior staff members at the Port of Spain and San Fernando General Hospitals noted that Venezuelans seeking medical attention were either HIV positive or had malaria.

Deyalsingh said T&T had 17 cases of malaria of which only one was local. However, he confirmed that Venezuelans presented the majority of cases.

“For 2019 we have 17 cases of malaria; 16 are imported and one local. Of the 16 imported, 13 are from Venezuela, one from Uguanda, one from Guyana and one from Ghana. We are treating all cases as we always do.”

While the Minister did not comment on whether Venezuelan nationals seeking medical attention were HIV positive, he assured that Trinidad and Tobago will not turn anyone away.

“On the issue of HIV, this country has signed on to the United Nations Policy of Test All Treat All and all persons in Trinidad and Tobago, regardless of their status – whether they are a citizen, a resident, CSME, a migrant – will be tested and will be treated for HIV.”

“We do not want to drive anybody underground who may have malaria or HIV. They should feel comfortable coming to our facilities to be tested and treated, we treat this as a public health issue and I  have said publicly that these matters will be given free of charge to anyone. There should be no discrimination, no stigmatisation and no sensationalism of this public health issue and the government has taken a proactive stance to deal with it.”

Meanwhile, Deyalsingh said Trinidad and Tobago could afford to provide HIV care for all persons since two years ago, the government switched to the PAHO Strategic Fund to source antiretrovirals, saving the country $78 million dollars.

The Health Minister further noted that a database of medical issues for registered Venezuelan migrants is being developed.

Deyalsingh: 5 imported cases of malaria in T&T for 2019