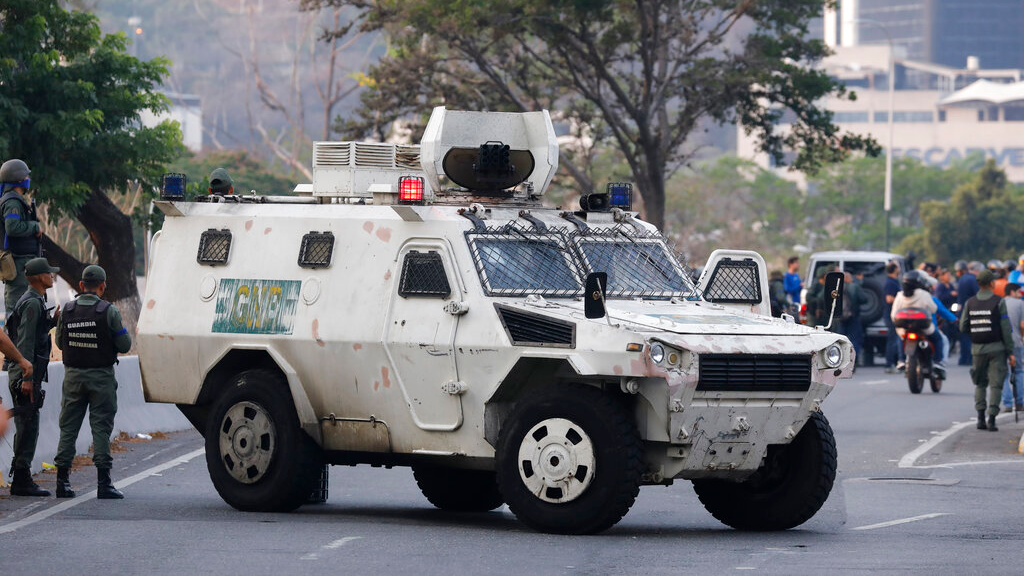 A military vehicle blocks an avenue next to La Carlota air base in Caracas, Venezuela, Tuesday, April 30, 2019. Venezuelan opposition leader Juan Guaido has called for a military uprising, in a video shot at the air base showing him surrounded by soldiers and accompanied by detained activist Leopoldo Lopez. (AP Photo/Ariana Cubillos)

Venezuelan opposition leader Juan Guaidó took to the streets with activist Leopoldo Lopez and a small contingent of heavily armed soldiers early Tuesday in a bold call for the military to rise up and oust socialist leader Nicolas Maduro.

"I want to tell the Venezuelan people: This is the moment to take to the streets and accompany these patriotic soldiers," said Lopez in his first public appearance since being detained in 2014 for leading anti-government protests. "Everyone should come to the streets, in peace."

Lopez said he has been freed by members of the military responding to an order by Guaidó, whom the U.S. and dozens of other governments recognize as Venezuela's rightful leader.

As Lopez spoke, there were sporadic efforts with tear gas to break up the protesters who gathered on a highway overpass in wealthier eastern Caracas. It appeared to have been fired from inside the Carlota air base. But more people gathered as they sensed what could be their strongest opportunity yet to overthrow the government.

"It's now or never," said one of the young soldiers, his face covered in the blue bandanna preferred by the few dozen soldiers who stood alongside Guaidó and Lopez.

Socialist party boss Diosdado Cabello downplayed the significance of the rebellion, saying most of Caracas was in complete calm. He called on government supporters to amass at the presidential palace to defend Maduro from what he said was a U.S.-backed coup attempt.

The tumultuous events started when Guaidó appeared in an early morning video shot next to the airbase. He was surrounded by the heavily armed soldiers backed by a few armored vehicles

Guaido said soldiers who had taken to the streets were protecting Venezuela's constitution.

Cuba challenges US to provide proof of Venezuela charges