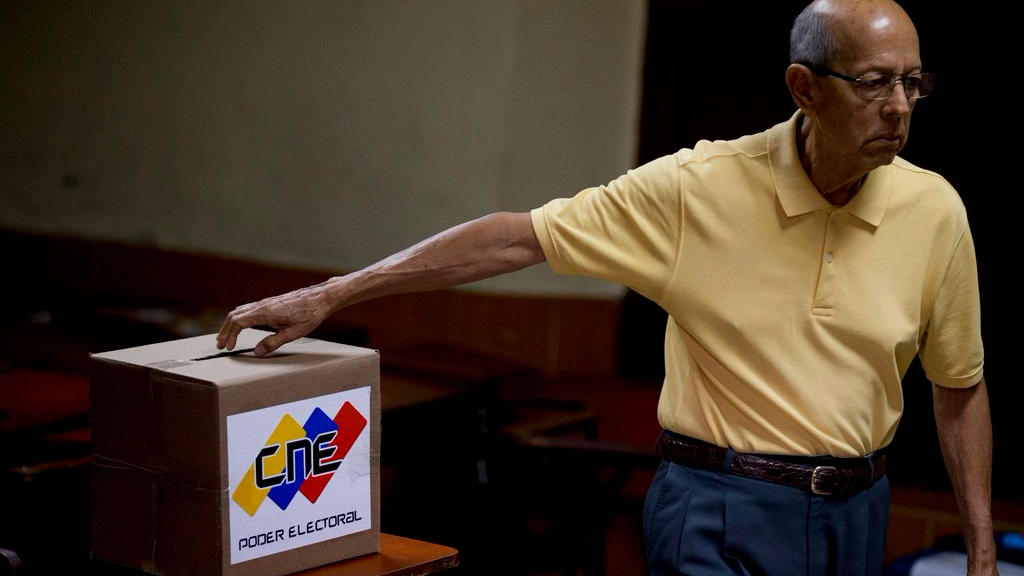 Venezuela's ruling socialists swept nearly all the races for mayors across the country, and President Nicolas Maduro is now threatening to ban key opposition parties from future elections in the oil-rich country wracked by economic crisis.

Hundreds of supporters shouted "Go Home, Donald Trump" to interrupt Maduro at a rally late Sunday in the colonial center of Caracas, where he announced that pro-government candidates grabbed more than 300 of the 335 mayoral offices.

Sunday's voting marked the last nationwide elections before next year's presidential race when Maduro is expected to seek another term despite his steep unpopularity.

"The imperialists have tried to set fire to Venezuela to take our riches," Maduro told the crowd. "We've defeated the American imperialists with our votes, our ideas, truths, reason and popular will."

The elections played out as Venezuelans struggle with triple-digit inflation, shortages of food and medicine, and charges that Maduro's government has undermined democracy by imprisoning dissidents and usurping the powers of the opposition-controlled National Assembly.

Three of the four biggest opposition parties refused to take part in Sunday's contests, protesting what they called an electoral system rigged by a "dictator." The last time the opposition refused to compete in congressional elections in 2005 it strengthened the government's hand for years.

After dropping his vote into the cardboard ballot box earlier in the day, Maduro responded to the boycott.

This has been a turbulent year for Venezuela, which holds the world's largest oil reserves but has been battered by low crude prices and a crash in production. The country saw months of protests that left more than 120 dead earlier this year, and it is now facing U.S. economic sanctions as it seeks to refinance a huge international debt.

The struggles have caused the president's approval rating to plunge, although the opposition has been largely unable to capitalize on Maduro's unpopularity.

Maduro said the third electoral victory for the ruling party in little more than four months signaled that the socialist "Chavista" revolution begun by the late President Hugo Chavez has defeated its opponents who are intent on sowing violence in the country.

In a country of 30 million people, 9 million cast ballots — about half of eligible voters. Maduro's opponents on social media questioned the figures.

The mayoral elections follow a crushing defeat of opposition candidates in October's gubernatorial elections, where anti-Maduro candidates won just five of 23 races amid allegations of official vote-buying and other irregularities.

Given the opposition's disarray, political analysts said they doubted Maduro's opponents would be able to rally behind a single candidate in next year's presidential election.

"These were absolutely predictable results," local pollster Luis Vicente Leon said on Twitter. "It's absurd to think that an abstaining political force can win the majority of mayorships."

Iraq's PM announces end of IS war on state TV